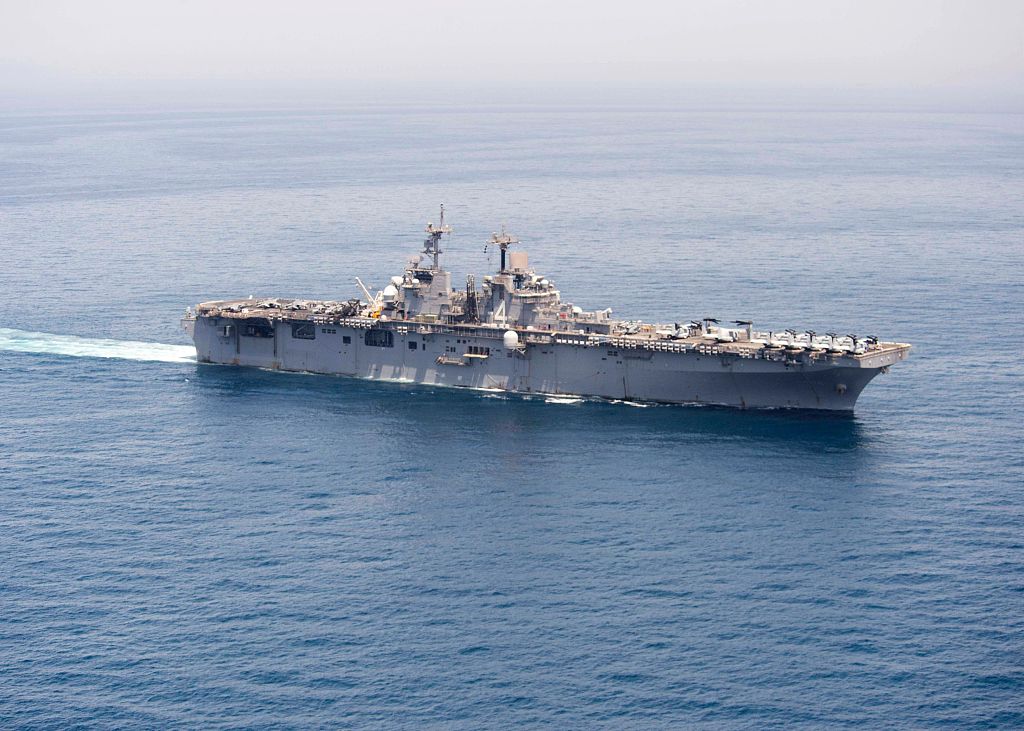 In this file photo taken on June 15, 2016 released by the US Navy, the amphibious assault ship USS Boxer transits The Gulf to conduct missions in support of Operation Inherent Resolve. （File photo via VCG）

WASHINGTON, July 18 (Xinhua) --- U.S. President Donald Trump announced on Thursday that a U.S. warship destroyed an Iranian drone in the Strait of Hormuz.

Speaking at the White House, Trump said that USS Boxer, an amphibious assault ship of the U.S. Navy, destroyed the drone that threatened the U.S. warship by flying within 1,000 yards of it and ignored multiple warning.

Trump said the drone was "threatening the safety of the ship and the ship's crew," calling the downing a "defensive action."

Chief Pentagon spokesperson Jonathan Hoffman said later in a statement that USS Boxer downed the approaching drone at approximately 10 a.m. local time during its planned inbound transit of the Strait of Hormuz.

"A fixed wing unmanned aerial system (UAS) approached USS Boxer and closed within a threatening range. The ship took defensive action against the UAS to ensure the safety of the ship and its crew," said the statement.

Citing U.S. defense officials, CNN reported that the Iranian drone was brought down by counter-drone jamming equipment, which was operated by U.S. marines aboard the USS Boxer.

Iranian Foreign Minister Mohammad Javad Zarif later told reporters at the UN headquarters "We have no information about losing a drone today."

The incident came as Iran's Islamic Revolutionary Guard Corps (IRGC) announced that it had seized a foreign ship "smuggling fuel" in the Gulf on Thursday and days after reports of a British tanker being harassed in the region.

The downing of the Iranian drone also came one month after a U.S. drone operating over the Strait of Hormuz was shot down by Iranian air defense system on June 19, which almost led to a U.S. military retaliation against Iran.

USS Boxer, a Wasp-class amphibious assault ship, arrived in U.S. Central Command area of operation on June 23 with the 11th Marine Expeditionary Unit and two other amphibious warships, according to a statement of U.S. 5th Fleet.

The United States has been upgrading its military posture in the Middle East since May by sending troops and military assets to the region. Pentagon claimed these measures are "prudent response to credible threats from Iran" and for "defensive purpose."

"Anybody who starts a war with Iran will not be the one who ends it," Zarif warned on Wednesday, referring to the escalating tensions between Iran and the United States amid U.S. military buildup in the region.