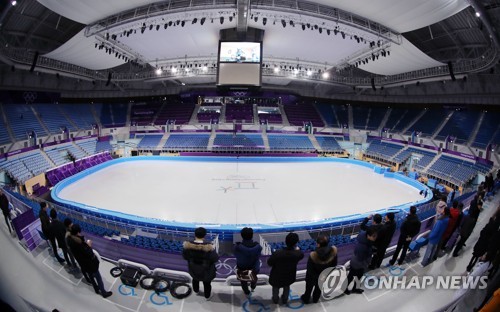 North Korean women's ice hockey players and an advance team of sports officials arrived in South Korea Thursday in preparation for their country's participation in next month's PyeongChang Winter Olympics.

An eight-member delegation led by Yun Yong-bok, a senior official at the North's sports ministry, crossed the border at 9:21 a.m. via a western land route for a three-day visit to inspect competition venues at the games.

Along with the advance team, a 15-member delegation including 12 women's ice hockey players also arrived in the customs, immigration and quarantine office in Paju, just south of the border.

The advance team will check competition venues in Gangneung, 260 kilometers east of Seoul, and nearby PyeongChang, the host town of the Winter Games. The team will also inspect the accommodation for athletes, cheerleaders, taekwondo demonstrators and others.

South Korea and North Korea have engaged in a flurry of sports diplomacy after North Korean leader Kim Jong-un expressed his willingness to send a delegation to the Winter Games in his New Year's message.

The two Koreas held three rounds of talks on the North's participation this month after years of the North's nuclear and missile provocations.

The North will send 22 athletes to compete in three sports at the Feb. 9-25 Winter Games, the International Olympic Committee (IOC) said Saturday. The Koreas have also agreed to field a joint women's ice hockey team at the games.

The advance team will visit ice sports venues in Gangneung on Thursday, including the Kwandong Hockey Centre, where the two Koreas' unified ice hockey team will compete with global rivals.

On Friday, the delegation will move to PyeongChang, which hosts the skiing venues, and then go to Seoul the following day to check a hotel and the venue for the North's taekwondo demonstrations, according to the ministry.

The North's hockey players are expected to move to a national training center in Jincheon, 90 kilometers south of Seoul, to conduct a joint exercise with their South Korean counterparts to prepare for the games.

The formation of the joint team has sparked public uproar here on concerns that the move could damage South Korean players.

Later in the day, a South Korean advance team is set to return home from North Korea after a three-day inspection of venues at Mount Kumgang for a joint cultural event and at Masikryong Ski Resort for joint ski training.

Hyon Song-wol, the leader of an all-female North Korean band, returned home Monday after leading a seven-member delegation for a two-day visit to inspect venues for the country's proposed art performances in the South.

Top Image: Photo taken on Jan. 24 shows the Gangneung Ice Arena, the venue for short track speed skating and figure skating at the PyeongChang Winter Olympics, in Gangneung, a sub-host city of the Games. (Yonhap)