WORLD $2.5B headed to tribes for long-standing water settlements

$2.5B headed to tribes for long-standing water settlements 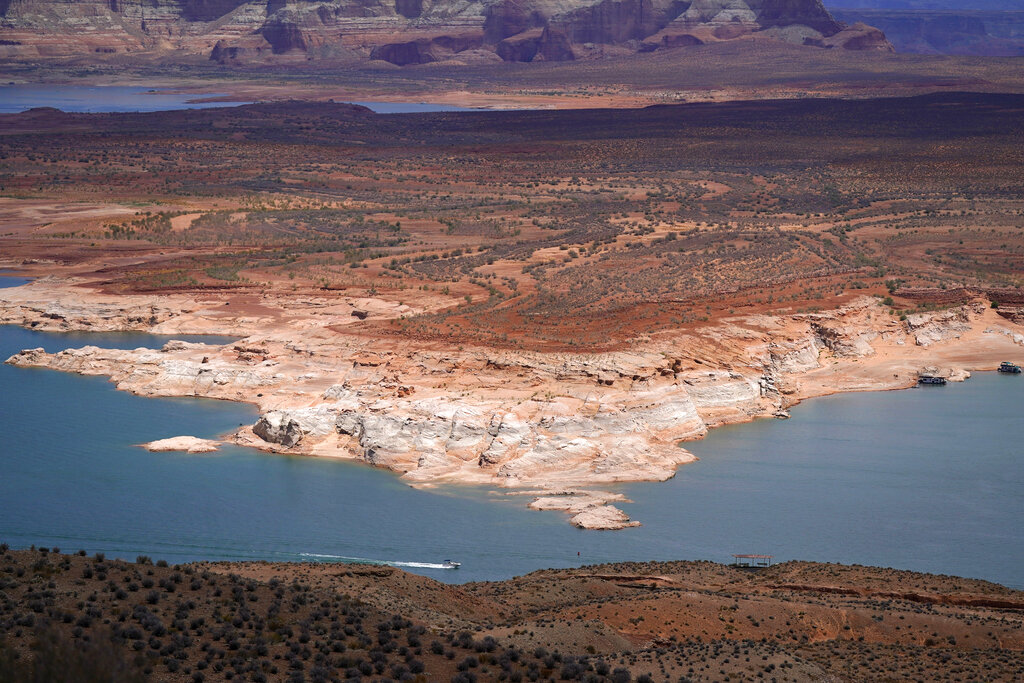 A boat moves along Wahweap Bay along the Upper Colorado River Basin, Wednesday, June 9, 2021, at the Utah and Arizona border near Wahweap, Ariz. (Photo: AP)

For over a decade, residents of the rural Fort Apache Reservation in eastern Arizona have been promised miles of pipeline that would bring clean drinking water to their communities.

Now, a one-time windfall to help carry out the agreement could be on its way.

The federal infrastructure bill signed last month includes $2.5 billion for Native American water rights settlements, a tool tribes have used to define their rights to water from rivers and other sources and get federal funding to deliver it to residents.

The federal government has not disclosed how the money will be divvied up. But tribes involved in more than 30 settlements — many in the U.S. West, including the White Mountain Apache of the Fort Apache Reservation — are eligible and eagerly awaiting specifics.

“These are longstanding lapses in the building out of infrastructure ... to make sure that people in Indian Country are not left behind,” said Heather Whiteman Runs Him, who is from the Crow Nation of Montana and directs the University of Arizona’s Tribal Justice Clinic.

Access to reliable, clean water and basic sanitation facilities on tribal lands remains a challenge for hundreds of thousands of people. The funding for settlements is part of about $11 billion from the infrastructure law headed to Indian Country to expand broadband coverage, fix roads and provide basic needs like running water.

The U.S. Supreme Court ruled in 1908 that tribes have rights to as much water as they need to establish a permanent homeland, and those rights stretch back at least as long as any given reservation has existed. As a result, tribal water rights often are more senior to others in the West, where competition over the scarce resource is often fierce.

Litigation can be expensive and drawn-out, which is why many tribes have turned to settlements. The negotiations generally involve tribes, states, cities, private water users, local water districts and others and can take years if not decades to hash out.

“What makes them a complicated and often very slow-moving process is there are huge potential ramifications for how a tribal water right gets quantified and developed,” said Richard “Jim” Palmer, the White Mountain Apache Tribe’s attorney general from 2010 to 2018.

Nearly 40 water rights settlements have been reached with tribes, some of which include more than one tribe. The Interior Department said 31 of the settlements are eligible for funds from the infrastructure bill.

“This money will really help us to fulfill our end of the deal,” said Elizabeth Klein, senior counselor to the Interior secretary.

Congress approved the White Mountain Apache settlement in 2010. The tribe received more than one-third of the water it claimed it was entitled to from two rivers that flow on the mountainous reservation in exchange for the promise of federal money to deliver the water to tribal communities.

The tribe has said it needs federal funding for water storage, surface water treatment facilities and miles of pipeline so residents can have a reliable and clean source of drinking water.

The projects stalled, however, because of cost overruns and technical issues that took years to resolve and even more negotiations to secure additional funding, Palmer said. He added that’s typical of many tribal water rights settlements.

“It’s a situation of having a lot of money on paper but it being very, very difficult to access and implement ... without a staggering amount of red tape getting in the way,” said Palmer, who is White Mountain Apache.

As a result, residents of the reservation still rely on over-pumped wells or consume water that’s potentially contaminated with heavy metals, Palmer said.

“It kind of clears the decks on these annual funding cycles so you have less competition for ... limited dollars,” he said.

The Navajo Nation — the largest Native American reservation in the U.S. — said it expects to receive funding from the infrastructure law for a 2020 settlement it reached with Utah for water in the upper Colorado River basin.

Congress authorized $210 million for water delivery infrastructure and agricultural conservation projects to help bring running water to the Utah side of the reservation, but lawmakers did not provide full funding.

Meanwhile, residents and public health experts are concerned about groundwater contamination from uranium and arsenic. On the Utah portion of the Navajo Nation, the tribe has said hundreds of households — or roughly 40% of the residents — lack running water or proper sanitation facilities.

The 27,000-square-mile (70,000-square-kilometer) reservation is larger than West Virginia and also stretches into Arizona and New Mexico. Homes are scattered on the landscape, adding to the difficulties in transporting water.

Tribes say the faster they get the funding, the sooner they can start long-anticipated projects to make use of water deemed theirs on paper.

“Ultimately, it really is about allowing and facilitating tribes to be able to put their water to use, which is the point of the whole exercise,” Weiner said.