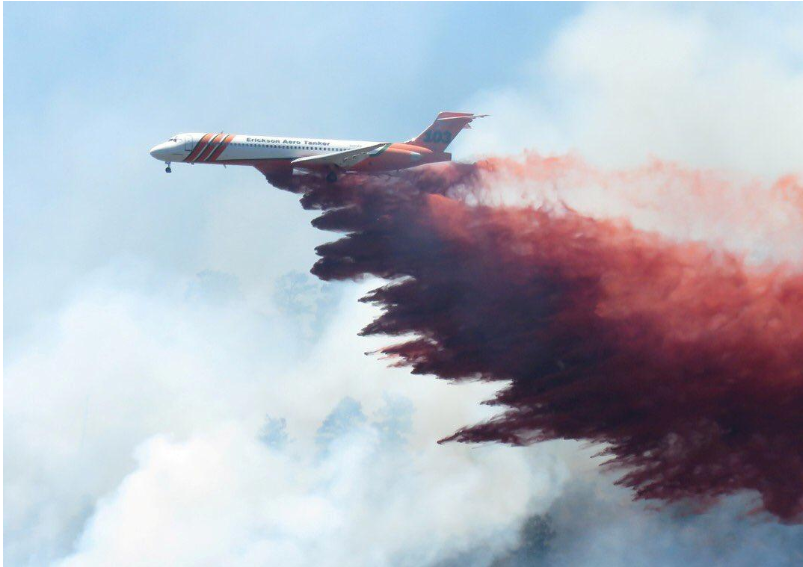 A plane drops fire-retardant chemicals on the 416 Fire near Durango, Colorado, US in this June 9, 2018 handout photo. (Photo: Reuters)

Gusting winds and continued dry weather were driving the flames of a largely uncontrolled wildfire into an 11th day on Monday in southwest Colorado, where more than 2,000 homes have already been evacuated.

The blaze, called the 416 Fire by responders, is the latest in the 2018 fire season in the western United States. Last year set a near-record year for wildfires, when 10 million acres (4 million hectares) were burned across the country, the National Interagency Coordination Center said.

“There’s no rain in sight and the winds are going to be 15 miles per hour (24 km per hour) with higher gusts all day,” said Bob Oravec, a meteorologist with the National Weather Service’s Weather Prediction Center in College Park, Maryland. “That’s a bad combination.”

All 1.8 million acres (730,000 hectares) of the San Juan National Forest were due to be closed to visitors by Tuesday, the US Department of Agriculture said in a statement, citing the danger posed by the fire.

More powerful wind gusts of 35-45 mph (56-72 kph) helped drive the largely unchecked wildfire, which is north of the small city of Durango, to nearly double in size from Saturday to Sunday.

According to the most recent official update on the fire, it had burned nearly 17,000 acres (6,900 hectares) by Sunday evening, an area larger than the island of Manhattan.

More than 800 firefighters were battling the blaze, which was 10 percent contained, the Rocky Mountain Incident Management Team said.

No buildings have been destroyed so far but the fire was a few hundred yards from homes, with multiple aircraft dropping water and flame retardant to curtail the blaze, according to Inciweb, an interagency fire report.

“The terrain is rough and inaccessible in many areas,” the report said. June 30 was the estimated date for containment, it said.

While the winds were dropping on Monday, Oravec said it was only modest good news.

“It’s still a fan on the fire,” Oravec said. “It won’t be until Tuesday before the winds really die down.”

The NWS has placed large portions of the Four Corners region of Utah, Colorado, New Mexico and Arizona under a red flag warning of extreme fire danger due to the dry conditions.