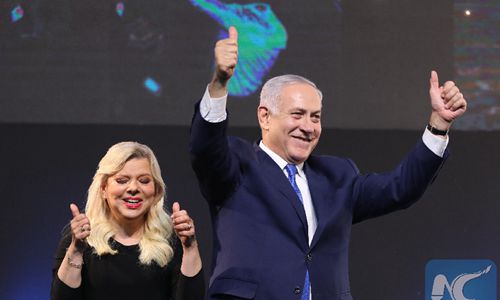 A new round of negotiations between Netanyahu's right-wing Likud and Gantz's centrist Blue and White broke down Sunday and the two sides appeared far from reaching a compromise.

Likud said Netanyahu would make a "last effort" to reach a deal before informing President Reuven Rivlin he is unable to form a government.

That would leave Rivlin to decide whether to ask Gantz to try to do so or call on parliament to agree on a candidate for prime minister by a vote of at least 61 out of 120 members.

Netanyahu "will make a last effort to realize the possibility of forming a government at this stage, before returning the mandate to the president," Likud said in a statement.

Blue and White accused Likud of "throwing around slogans with the sole aim of generating support in preparation for dragging Israel into another round of elections at the behest of Netanyahu."

This month's poll was the second this year, after Netanyahu failed to form a coalition following April polls.

Israel marks the two-day Rosh Hashanah holiday beginning Sunday night and serious negotiations are not expected during that time.

Likud wants to negotiate on the basis of a compromise set out by Rivlin to form a unity government, which takes into account the possibility of Netanyahu being indicted for corruption in the weeks ahead.