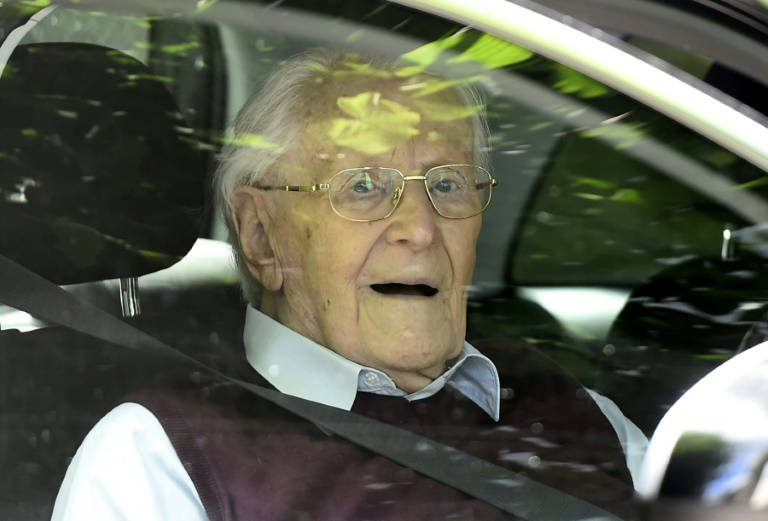 Groening has been living at home despite his conviction, and given his age, it had been unclear if he would be jailed.      Photo: AFP

A former Nazi SS guard known as the "Bookkeeper of Auschwitz", now 96, is fit to serve his four-year prison sentence, a German court ruled Wednesday, in an unprecedented decision more than 70 years after World War II.

In one of the last cases against surviving Nazis, Oskar Groening was found guilty in July 2015 of being an accessory to the murders of 300,000 people at the death camp.

He has been living at home despite the conviction, pending his appeal for the sentence to be suspended.

"Based on expert opinion, the superior regional court finds that the convicted individual is fit to serve out the term despite his advanced age," said the court in Celle in northern Germany.

Incarcerating Groening would not violate his fundamental rights, it said, arguing that "appropriate precautionary measures" could be taken to meet any special needs arising from his old age.

Making the case for his imprisonment, prosecutors have said that a court doctor has determined that Groening is able to serve his sentence, on condition he is given appropriate nursing and medical care while in detention.

Groening worked as an accountant at Auschwitz, sorting and counting the money taken from those killed or used as slave labor, and shipping it back to his Nazi superiors in Berlin.

He also on several occasions performed "ramp duty", processing deportees as they arrived by rail in cattle cars.

Holocaust Memory Commissioner at the World Jewish Congress, Charlotte Knobloch, said it was high time Groening went to prison over the crimes.

During his trial, Groening acknowledged "moral guilt" but said it was up to the court to rule on his legal culpability.

He had testified that he was so horrified by the crimes he witnessed at the camp after his arrival in 1942 that he appealed three times for a transfer to the front, which was not granted until autumn 1944.

Groening had previously been cleared by German authorities after lengthy criminal probes dating back to the 1970s.

But a case was reopened against him as the legal basis for prosecuting former Nazis changed in 2011 with Germany's landmark conviction of former death camp guard John Demjanjuk.

The former guard was sentenced not for atrocities he was known to have committed, but on the basis that he worked at the Sobibor camp in occupied Poland and had thus been a cog in the Nazis' killing machine.