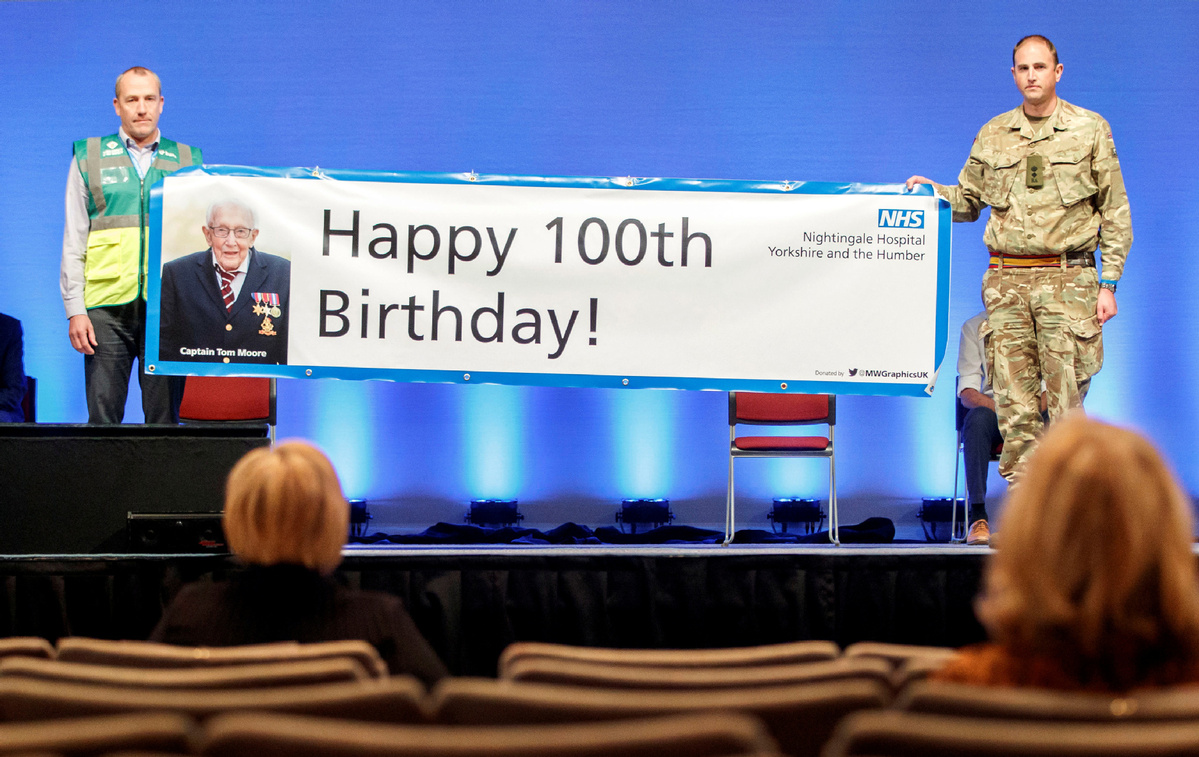 Guests hold up a sign wishing a Happy 100th Birthday to Captain Tom Moore as he and his daughter Hannah Ingram-Moore speak via video-link at the opening of the NHS Nightingale Hospital Yorkshire and the Humber in Harrogate, North Yorkshire, Britain, April 21, 2020. (Photo: Agencies)

The World War II veteran, who has used a walking frame with wheels since breaking his hip, set himself the target of walking the 25 metres around his garden 100 times before his 100th birthday on April 30.

He completed his task on April 16.

Prince Harry said in an interview published on April 19, that he was honored to be an army veteran in the company of people like Moore.

"Congratulations to Tom. What he's done is utterly amazing. It's not just what he's done but it's the reaction that people have had as well. Just wonderfully British," Harry told the Declassified podcast for ex-servicemen and women.

Moore's original target was to raise 1,000 pounds, but that modest aim was blown away as media attention from around the globe zoomed in on his garden in Bedfordshire, central England.

The retired army officer will be the guest of honor when a new "Nightingale" field hospital opens in Harrogate in northern England this week, which is being set up to help deal with the coronavirus outbreak.

"I am still amazed by the amount of kindness and generosity from the UK public who continue to give despite it being an uncertain time for many," Moore said in a statement on April 18. ($1 = 0.7995 pounds)

Moore has also been invited to perform one of British sport's quaintest traditions once the crisis is over.

He will get the chance to ring the famous bell at Lord's cricket ground, signalling the start of a day's play, as a reward for his fundraising efforts. The job is typically given to former cricketers or figures in the sport.

The offer was made to Moore, a cricket fan, by England captain Joe Root - a fellow Yorkshireman.

"I'd love you to give us a team talk at some point as well," Root said in a video conversation with Moore, "and get all the lads in the right frame of mind."

The Twitter account of Lord's posted a message to Moore, saying he is "an inspiration to us all."