WORLD ‘Complete collapse of economies’ ahead as Africa faces virus

‘Complete collapse of economies’ ahead as Africa faces virus 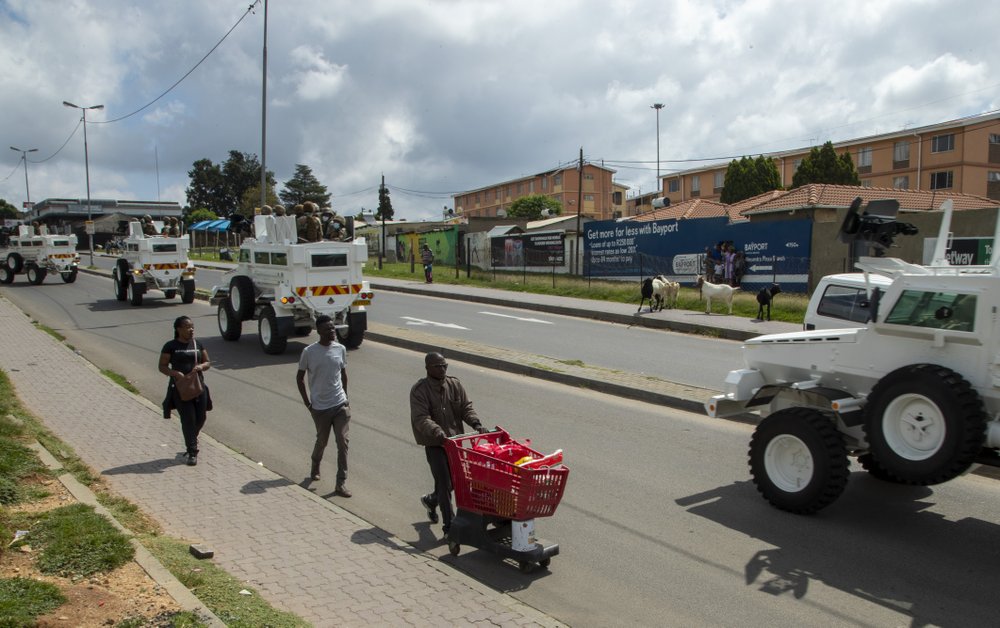 A man pushing a shopping cart with the food on the street as South African National Defence Forces drive through a densely populated Alexandra township east of Johannesburg, South Africa, March 28, 2020. (Photo: AP)

Some of Uganda’s poorest people used to work here, on the streets of Kampala, as fruit sellers sitting on the pavement or as peddlers of everything from handkerchiefs to roasted peanuts.

Now they’re gone and no one knows when they will return, victims of a global economic crisis linked to the coronavirus that could wipe out jobs for millions across the African continent, many who live hand-to-mouth with zero savings.

“We’ve been through a lot on the continent. Ebola, yes, African governments took a hit, but we have not seen anything like this before,” Ahunna Eziakonwa, the United Nations Development Program regional director for Africa, told The Associated Press. “The African labor market is driven by imports and exports and with the lockdown everywhere in the world, it means basically that the economy is frozen in place.

“And with that, of course, all the jobs are gone.”

More than half of Africa’s 54 countries have imposed lockdowns, curfews, travel bans or other measures in a bid to prevent local transmission of the virus. They range from South Africa, where inequality and crime plague Africa’s most developed country, to places like Uganda, where the informal sector accounts for more than 50% of the country’s gross domestic product.

The deserted streets in downtown Kampala, Uganda’s capital, underscore the challenge facing authorities across the world’s poorest continent, home to 1.3 billion people: how to look after millions of people stuck at home for weeks or even months of lockdown.

With some governments saying they’re unable to offer direct support, the fate of Africa’s large informal sector could be a powerful example of what experts predict will be unprecedented damage to economies in the developing world. Among the millions made jobless are casual laborers, petty traders, street vendors, mechanics, taxi operators and conductors, housekeepers and waitresses, and dealers in everything from used clothes to construction hardware.

Unless the virus’ spread can be controlled, up to 50% of all projected job growth in Africa will be lost as aviation, services, exports, mining, agriculture, and the informal sector all take a hit, Eziakonwa said.

“We will see a complete collapse of economies and livelihoods. Livelihoods will be wiped out in a way we have never seen before,” she warned.

The U.N. Economic Commission for Africa has said the pandemic could seriously dent already stagnant growth in many countries, with oil-exporting nations like Nigeria and Angola losing up to $65 billion in revenue as prices fall.

Economies in sub-Saharan Africa are seen as especially vulnerable because many are heavily indebted and some struggle just to implement their budgets under less stressful circumstances.

Now the continent might need up to $10.6 billion in unanticipated increases in health spending, and revenue losses could lead to debt becoming unsustainable, UNECA chief Vera Songwe said in March.

Urgent calls for an economic stimulus package have followed.

Ethiopian Prime Minister Abiy Ahmed has spoken of an “existential threat” to Africa’s economies while seeking up to $150 billion from G20 nations. A meeting of African finance ministers agreed that the continent needs a stimulus package of up to $100 billion, including a waiver of up to $44 billion in interest payments.

South African President Cyril Ramaphosa backed the calls for a stimulus package, saying in a recent speech that the pandemic “will reverse the gains that many countries have made in recent years.” Several African nations have been among the fastest-growing in the world.

The International Monetary Fund on March 25 said it had received requests for emergency financing from close to 20 African countries, with requests from another 10 or more likely to follow. The IMF has since approved credit facilities for at least two West African nations — Guinea and Senegal —

Measures to control the spread of COVID-19 could make that worse as people trapped at home go hungry.

UNECA has called for emergency actions to protect 30 million jobs immediately at risk across Africa, particularly in the tourism and airline sectors, saying the continent will be hit harder than others with an economic toll that will exacerbate “current fragilities.”

After Ugandan President Yoweri Museveni announced that food markets could remain open under orders to decongest crowded areas, some fruit vendors were assaulted by armed men and had goods confiscated, drawing an apology from the army commander. Museveni later announced an effective lockdown, closing public transport and all but essential businesses.

“What am I going to eat if he stops us from working? Museveni cannot do that,” said Marius Kamusiime, who operates a passenger motorcycle. “We may have to go back to the village if this corona becomes serious.”

On a continent where extended families are common, some say, one job loss can spell doom for up to a dozen or more people.

“Sitting down is not an option because they don’t have money locked away,” said Eziakonwa, the UNDP official in charge of Africa.

Some governments such as Rwanda are distributing food to those who need it, but there are questions about sustainability.

“We do know what to do to bring the economy back to life. What we don’t know is how to bring back people to life,” said Ghanaian President Nana Akufo-Addo. He has created a virus alleviation fund to look after the neediest and has donated the equivalent of his salary for three months.

But many want to see more support, including tax relief that benefits a wider section of the urban poor.

In Kenya, President Uhuru Kenyatta has announced temporary tax relief to people described as low-income earners — those earning up to $240 in monthly wages — as well a reduction in the maximum income tax rate from 30% to 25%. He also gave $94 million to “vulnerable members of our society” to protect them from economic damage.

But other leaders say they cannot afford such benefits.

Noting that “the rich countries are unlocking staggering sums” to stimulate their economies, Benin’s President Patrice Talon said that his West African country, “like most African countries, does not have these means.”