WORLD 'Coward': Epstein accusers pour out their anger in court

'Coward': Epstein accusers pour out their anger in court

One by one, 16 women who say they were sexually abused by Jeffrey Epstein poured out their anger Tuesday, lashing out at him as a coward and a manipulator, after a judge gave them the day in court they were denied when he killed himself behind bars. 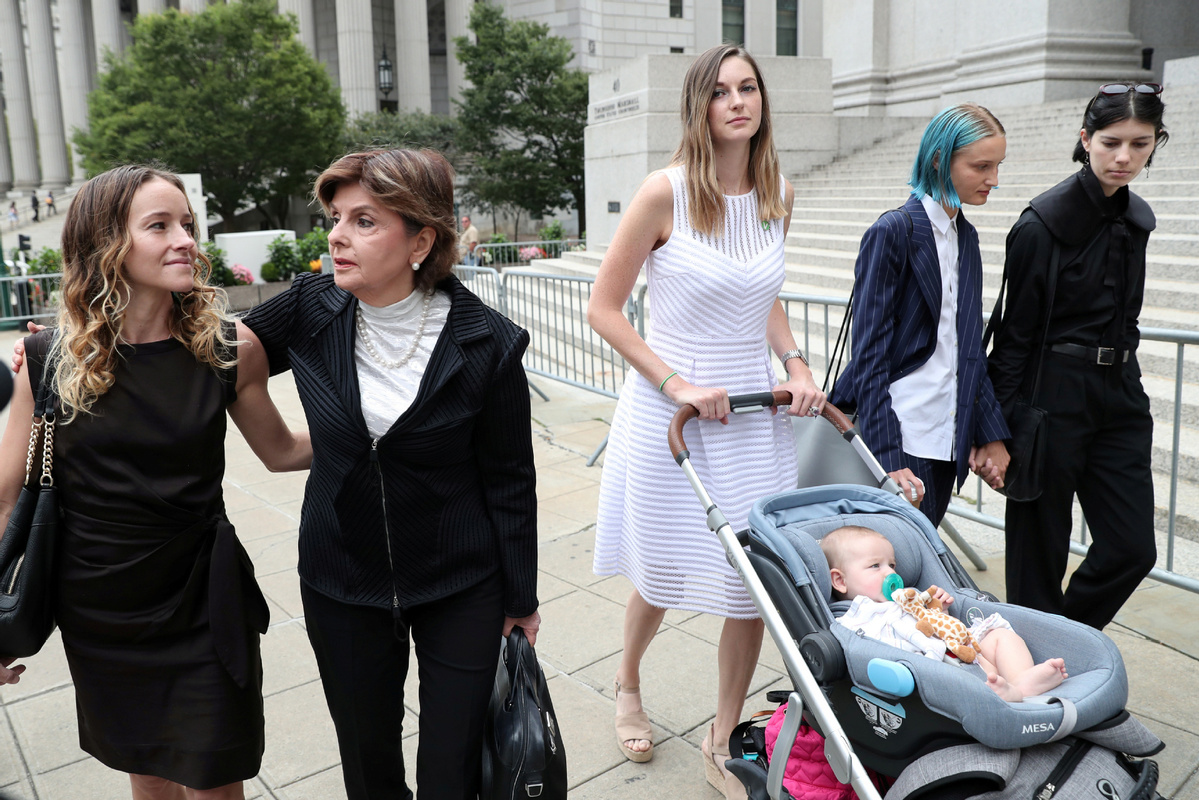 Gloria Allred, representing alleged victims of Jeffrey Epstein, arrives with Teala Davies for a hearing in the criminal case against Epstein, who died this month in what a New York City medical examiner ruled a suicide, at Federal Court in New York, on Aug 27, 2019. (Photo: Agencies)

"The fact I will never have a chance to face my predator in court eats away at my soul," said Jennifer Araoz, who has accused Epstein of raping her in his New York mansion when she was a 15-year-old aspiring actress.

"Even in death, Epstein is trying to hurt me. I had hoped to at last get an apology, but this evil man had no remorse or caring for what he did to anyone," she said.

The hearing was convened by US District Judge Richard M. Berman, who presided over the case after federal prosecutors had Epstein arrested last month.

The question before the judge was whether to throw out the indictment because of the defendant's death, a usually pro forma step undertaken without a hearing. But the judge offered Epstein's accusers an extraordinary opportunity to speak in court.

In addition to the women who spoke — some publicly for the first time — statements from several others were read in court by their lawyers.

They vented their fury over Epstein's alleged crimes and his suicide in his jail cell Aug. 10 while awaiting trial on sex-trafficking charges involving dozens of teenage girls. Repeatedly, the women described themselves as survivors and said they hoped coming forward would help others.

"I was a victim, but I will not remain a victim and be silent for one more day," said actress Anouska De Georgiou, who said she was sexually abused by Epstein as a teenager. "Although I think it's tragic when anybody dies before their time, I'm extremely relieved that Jeffrey Epstein will not be in a position to hurt any more children or any more women."

Courtney Wild, who has said she was sexually abused by Epstein in Florida at age 14, called him a "coward" who had "robbed myself and all the other victims of our day in court to confront him."

Araoz said she felt let down by Epstein's jailers, too.

"They let this man kill himself and kill the chance for justice for so many others in the process," she said.

Virginia Roberts Giuffre, who has said she was a 15-year-old working at President Donald Trump's Mar-a-Lago club when she was recruited to perform sex acts on Epstein, told the court: "My hopes were quickly dashed, and my dreams were stolen."

Sarah Ransome, who said Epstein pressured her into sex when she was in her early 20s, pleaded with prosecutors to go after those who helped the financier in his pursuit of victims.

"Please, please finish what you started," she said.

Among those under scrutiny: Epstein's girlfriend, Ghislaine Maxwell, who has been accused of recruiting young women for his sexual pleasure and taking part in the abuse. She has denied wrongdoing.

In opening the session, the judge called the 66-year-old Epstein's suicide a "rather stunning turn of events." He defended his decision to let the women speak, saying public hearings "promote transparency."

During the 2½-hour proceeding, the women sometimes clutched one another to lend support. Most remained composed, but several cried as they described falling into Epstein's web. His suicide left some of them angry, others sad. One said she was relieved that he was gone and could abuse no others.

Some women described their shame and embarrassment, saying Epstein manipulated them, dangling his wealth and power and connection to celebrities and political figures, while seizing on their vulnerabilities.

Several of the women chose to testify anonymously, including one who said she was 15 when she was flown to Epstein's New Mexico ranch. While molesting her, he was also "explaining to me how beneficial the experience was for me and how he was helping me grow," she said.

She said that as he abused her, she could see framed pictures of him on a dresser, smiling with celebrities.

Teala Davies, taking deep breaths to steady her voice, said she was 17 when she was victimized. She said she thought Epstein was the most powerful person she would ever meet.

"But the end is here, and here I stand, becoming more powerful than he will ever be," she said.

A New York City coroner ruled that Epstein hanged himself . But one of Epstein's lawyers, Martin Weinberg, challenged that finding during Tuesday's hearing, saying "we are told by a very experienced forensic pathologist" that broken bones in his neck were more consistent with strangulation than with suicide.

"Find out what happened to our client," the lawyer told the judge.

Assistant US Attorney Maurene Comey, though, said the manner of Epstein's death was irrelevant to Tuesday's proceedings.

The judge said he thought it was "fair game" for the defense to raise concerns, but took no immediate action on the request. Prosecutors noted that a grand jury is already investigating the death.

Dr. Michael Baden, the pathologist hired by Epstein's representatives to observe the autopsy, told The Associated Press Tuesday he is awaiting the report from the medical examiner's office before offering his opinion on the cause of death.

Comey said the dismissal of an indictment against Epstein "in no way lessens the government's resolve to stand up for the victims"At his death, Epstein was being held without bail, accused of abusing girls in the early 2000s at his mansions in New York and Palm Beach, Florida.

In the wake of his suicide, the warden of the federal jail and the acting director of the Bureau of Prisons were removed, and two guards who were supposed to be watching Epstein were placed on leave.

Epstein's lawyers contended he could not be prosecuted because he signed a non-prosecution deal with federal authorities over a decade ago in Florida that resulted in a 13-month stint in jail on state prostitution-related charges. Federal prosecutors in New York said that deal did not prevent the new charges.