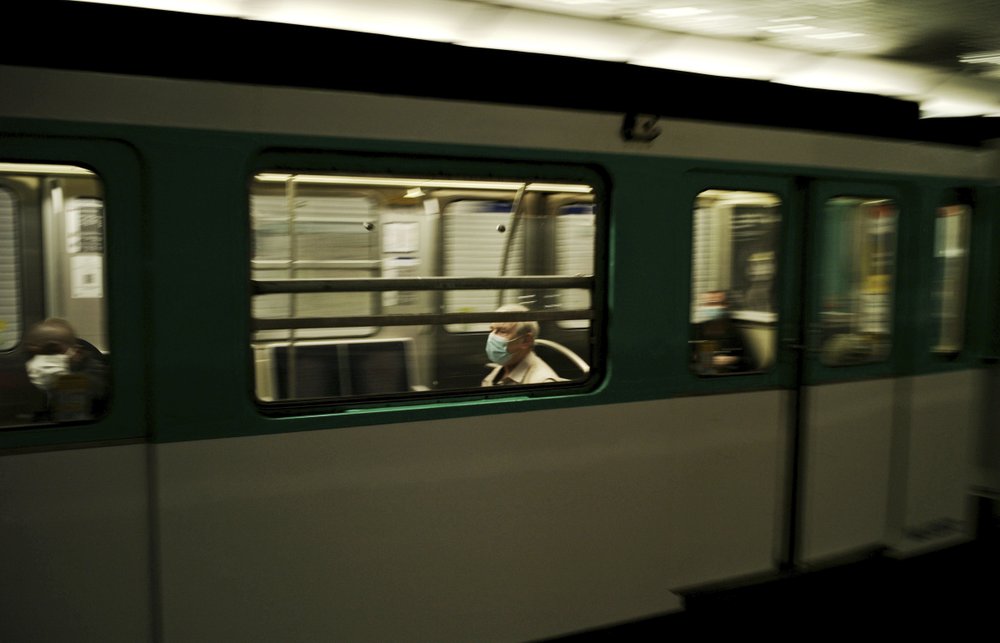 A man wears a face mask to protect against the spread of the new coronavirus as he sits on a Metro train, in Paris, Wednesday, April 29, 2020. (Photo: AP)

BRUSSELS, April 29 (Xinhua) -- Europeans are bracing themselves for "difficult" post-lockdown days on top of the heavy toll the COVID-19 pandemic has taken on the region.

With all the signs suggesting an economic recession, governments are straining to restore a resemblance of normalcy by easing lockdown, while firing warning shots across their residents' bows.

As of 10:00 CET on Thursday, 1,265,762 Europeans have contracted the coronavirus, accounting for 41.5 percent of the global count, while 125,986 of them have died, making up 58.2 percent of the death toll worldwide, according to the latest data from the European Center for Disease Prevention and Control (ECDC).

In Spain, where the pandemic has caused 24,275 deaths, Interior Minister Fernando Grande-Marlaska and Health Minister Salvador Illa warned on Wednesday that the period of scaling down anti-virus measures will not be easy.

"We should not fool ourselves, it is going to be difficult," said Grande-Marlaska in a joint press conference with Illa. "We can see the end of the road, but we can't forget the sacrifices that still lie ahead of us. Some of these stages are going to need more discipline than up to now."

In Poland, where the first stage of exit plan has been in effect since April 20, Prime Minister Mateusz Morawiecki appealed to Poles not to get complacent in the face of the pandemic.

"We are opening up the economy, but we are not relaxing our safety measures by one inch," he said during a press conference on Wednesday.

Health Minister Lukasz Szumowski added that the requirement to cover nose and mouth in public spaces will remain in place.

Ireland's largest hotel operator Dalata Hotel Group PLC announced on Wednesday that it has laid off 3,500 employees due to the impact of the COVID-19 pandemic.

It's the latest in a flurry of massive layoffs across Europe. Early this month, Riga International Airport downsized 500 staff members, as all its operations have been at a virtual standstill because of the pandemic.

Data released by the Romanian government on Monday revealed the pandemic has idled nearly a quarter of the labor force in the private sector.

The massive layoffs and suspensions added to the signs Europe is on a slippery slope toward economic recession.

The European Commission said in a statement on Wednesday that the Economic Sentiment Indicator (ESI) in both the euro area and the European Union (EU) plummeted in April, marking the sharpest monthly decline on record.

On the same day, German Minister for Economic Affairs and Energy Peter Altmaier said his government is bracing for the "worst recession" in history, with the gross domestic product (GDP) expected to fall by 6.3 percent this year.

In Italy, the government's Economic and Financial Document (DEF) has projected that overall revenues will drop by almost 6 percent this year compared to 2019.

"Such drop would be unprecedented, at least in the last 50 years," Eugenio Gaiotti, Head of Bank of Italy Economics and Statistics Department, commented on Wednesday at a press conference.