"Many, many severe cases of malnutrition" are being reported in Ethiopia's embattled Tigray region, Red Cross officials said Wednesday, as 80% of Tigray's 6 million people are unreachable in the fourth month of fighting and "emaciated" women and children fill displacement camps. 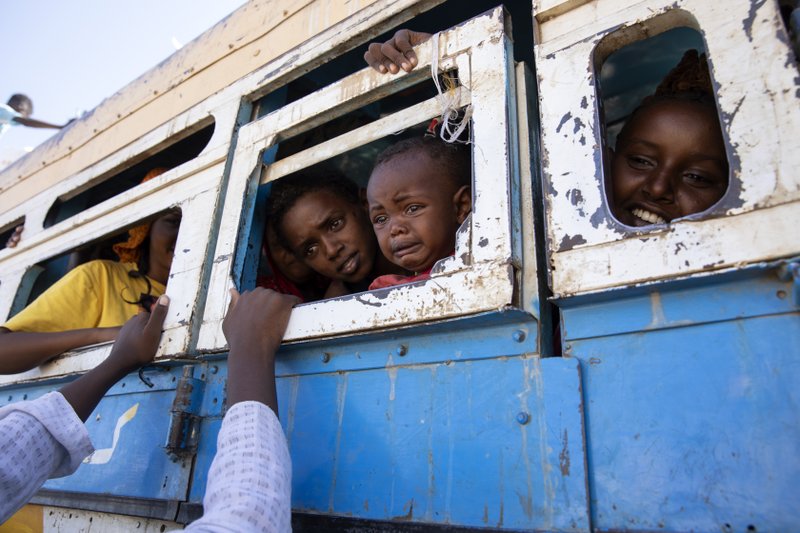 In this Tuesday, Dec. 1, 2020 file photo, refugees who fled the conflict in Ethiopia's Tigray region ride a bus going to the Village 8 temporary shelter, near the Sudan-Ethiopia border, in Hamdayet, eastern Sudan. (Photo: AP)

Reports of people already starving to death might just be a handful, but "after a month it will be in the thousands," warned Ethiopian Red Cross president Ato Abera Tola. After two months, he said, it will be tens of thousands.

Fighting continues between Ethiopian and allied forces and those of the now-fugitive Tigray government that had dominated the country's leadership for nearly 30 years.

The conflict broke out just before the harvest in the largely agricultural region and in the midst of a locust outbreak. Much of the Tigray population has been living off whatever resources they have since early November, and many people are on the run, leaving possessions behind.

He described seeing displaced women and children in the northern town of Shire who were "all emaciated ... their skin is really on their bones." And these are the people who were able to escape to the camps, he said.

Once humanitarian workers are able to reach Tigray's rural areas, "there we will see a more devastating crisis," Abera said. "We have to get prepared for the worst, is what I'm saying."

The Tigray regional capital, Mekele, "is, a paradox to say, a very lucky place," added Francesco Rocca, president of the International Federation of Red Cross and Red Crescent Societies. It now hosts a quarter-million displaced people.

Rocca described a "very difficult visit" to Tigray in which accessible hospitals are "barely working" with no medicines, no food for patients and no psychosocial support — "something surreal" after being looted or damaged.

"I have never seen a place where a simple antibiotic is not present," he later told The Associated Press in an interview, expressing shock at "the systematic aggression to health facilities."

Vaccines have expired. There are no HIV or tuberculosis drugs. "This is unacceptable," Rocca said. In the camps for displaced people, "there is a high risk of an outbreak of cholera or other diseases."

And it is "ridiculous" to speak of the COVID-19 pandemic when some 30 displaced people are forced to live in a classroom, he said.

Rocca repeated the plea for more access for humanitarian workers. "Slowly, slowly, support is arriving but it's still not enough," he said.

Asked what it will take for the conflict to end, he told the AP that "I think it will take a long time. The wounds of this conflict are very deep, this is my feeling. ... Given the complexity of the crisis and presence of other actors on the ground, it's really difficult to predict how this will end and how long it will be protracted."