The slow work of sifting through the remnants of a collapsed Florida condo building in the US stretched into a sixth day Tuesday, as families desperate for progress endured a wrenching wait for answers. 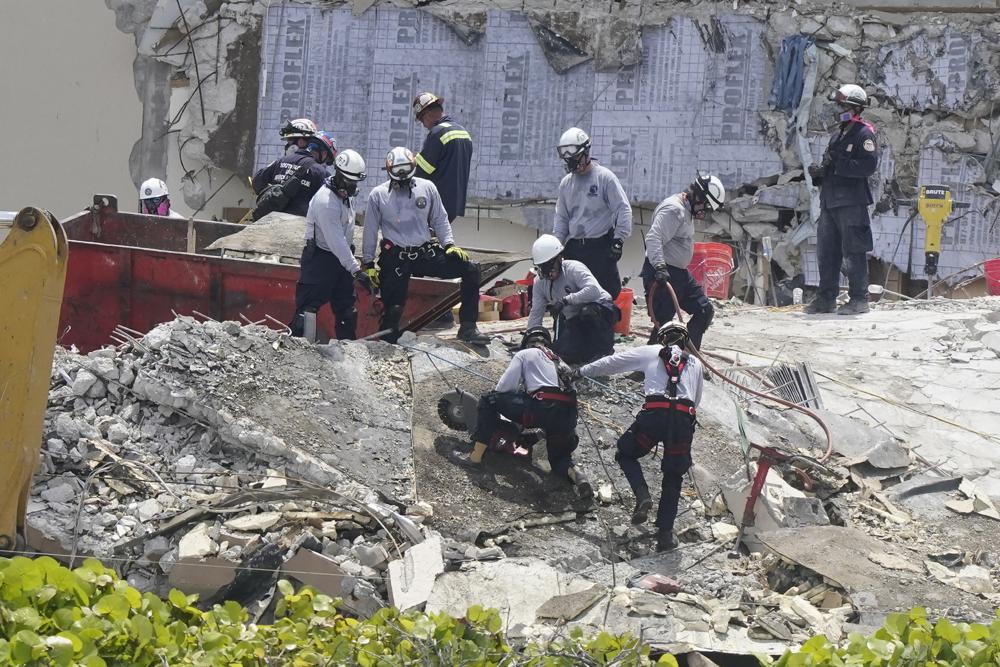 Workers cut a large slab of concrete at the Champlain Towers South condo, Monday, June 28, 2021, in Surfside, Florida, US. Many people were still unaccounted for after Thursday's fatal collapse. (Photos: AP)

"We have people waiting and waiting and waiting for news," Miami-Dade Mayor Daniella Levine Cava told reporters. "We have them coping with the news that they might not have their loved ones come out alive and still hope against hope that they will. They're learning that some of their loved ones will come out as body parts. This is the kind of information that is just excruciating for everyone."

The work has been deliberate and treacherous. Thunderstorms rolled through the area Tuesday morning, and debris fell onto the search area overnight from the shattered edge of the part of the building that still stands, forcing rescuers to mark a "don't go beyond here" line and focus their efforts parts of the debris pile that are farther from the structure, Surfside Mayor Charles Burkett told WSVN.

Just two additional bodies were found Monday, raising the count of confirmed dead to 11. That leaves 150 people still unaccounted for in the community of Surfside, just outside Miami.

Authorities are meeting frequently with families to explain what they're doing and answer questions. They have discussed with families everything from how DNA matches are made to help identify the dead, to how will next of kin be contacted, to going into "extreme detail" about how they are searching the mound, the mayor said. 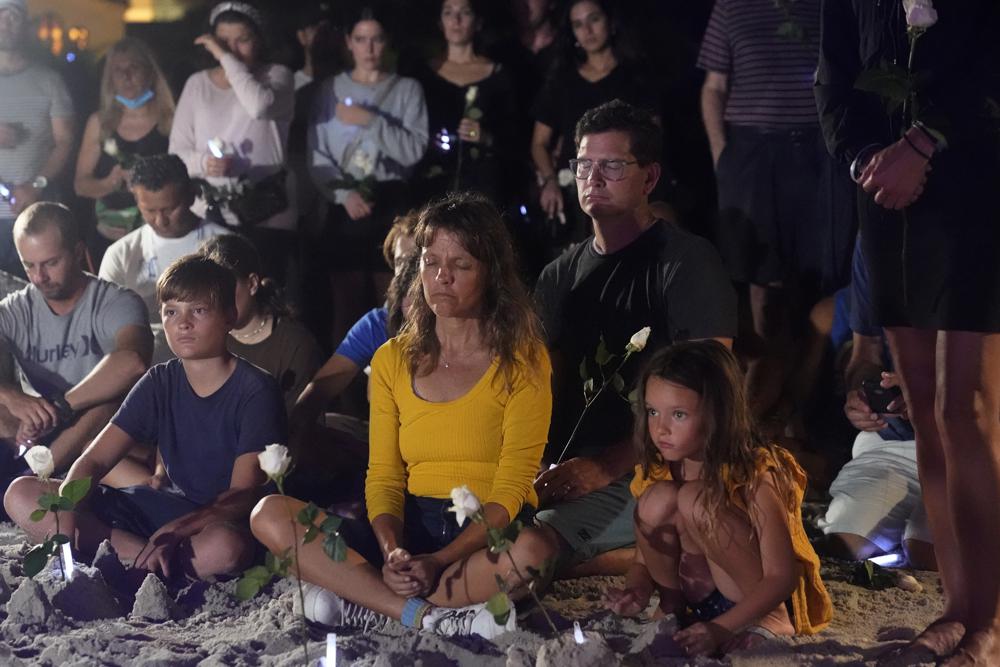 People gather at a vigil, late Monday, June 28, 2021, in Surfside, Florida, US. The vigil remembered those that died, are missing and those injured after a residential building collapsed last Thursday.

Armed with that knowledge, she said, families are coming to their own conclusions.

"Some are feeling more hopeful, some less hopeful, because we do not have definitive answers. We give them the facts. We take them to the site," she said. "They have seen the operation. They understand now how it works, and they are preparing themselves for news, one way or the other."

Rescuers are using bucket brigades and heavy machinery as they work atop a precarious mound of pulverized concrete, twisted steel and the remnants of dozens of households. The efforts include firefighters, sniffer dogs and search experts using radar and sonar devices.

Authorities said it's still a search-and-rescue operation, but no one has been found alive since hours after the collapse on Thursday.

The pancake collapse of the building left layer upon layer of intertwined debris, frustrating efforts to reach anyone who may have survived in a pocket of space.

"Every time there's an action, there's a reaction," Miami-Dade Assistant Fire Chief Raide Jadallah said during a news conference Monday. "It's not an issue of we could just attach a couple of cords to a concrete boulder and lift it and call it a day." Some of the concrete pieces are smaller, the size of basketballs or baseballs.

From outside a neighboring building on Monday, more than two dozen family members watched teams of searchers excavate the building site. Some held onto each other for support. Others hugged and prayed. Some people took photos.

Authorities insisted they are not losing hope.

Deciding to transition from search-and-rescue work to a recovery operation is agonizing, said Dr. Joseph A. Barbera, a professor at George Washington University. That decision is fraught with considerations, he said, that only those on the ground can make.

Barbera coauthored a study examining disasters where some people survived under rubble for prolonged periods of time. He has also advised teams on where to look for potential survivors and when to conclude "that the probability of continued survival is very, very small."

"It's an incredibly difficult decision, and I've never had to make that decision," Barbera said.

The building collapsed just days before a deadline for condo owners to start making steep payments toward more than $9 million in repairs that had been recommended nearly three years earlier, in a report that warned of "major structural damage."