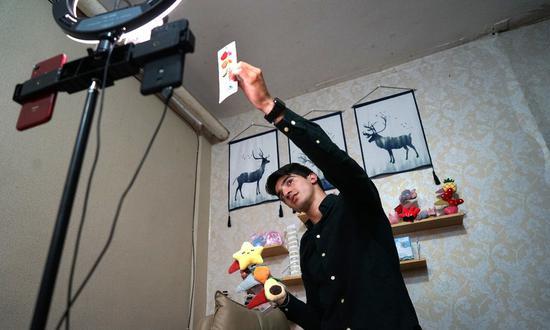 Sitting straight at his desk, live-streamer Sami Sabeaallil turns on the lights, places his mobile phone on a selfie stick and starts greeting his viewers. "Hi everyone, this is Sami," he says in Chinese. "I will recommend you some toys tonight…"

Just about every day, Sabeaallil livestreams on Douyin (China's domestic version of TikTok) for one or two hours, promoting his toys to Chinese buyers. Based in manufacturing hub Yiwu, the world's largest trading center for daily consumer goods in East China's Zhejiang Province, the 22-year-old said he is likely the first foreigner to get into livestream selling in Yiwu, and take advantage of China's skyrocketing e-commerce industry.

Sabeaallil has been hawking his toys on his Douyin account since June. Most of his videos are about his products, or show him hanging around Yiwu's markets and cracking jokes. For a video Sabeaallil published on October 1 - China's National Day -he invited dozens of foreigners from various countries to express their love for China, which got nearly 30,000 likes.

A young, Chinese-speaking foreigner attracts a lot of attention on China's social media. Sabeaallil now has only about 28,000 followers on Douyin but his goal is "to have 10 million followers within two years," the ambitious newbie live streamer told the Global Times.

With the ongoing COVID-19 pandemic's severely hitting the economy of many countries, Sabeaallil decided to try livestreaming. The pandemic has caused great losses among Yiwu's manufacturers and suppliers, Sabeaallil said.

"I want to look for more Chinese domestic buyers via Douyin," he said. As an owner of a Yiwu-based toy company, Sabeaallil used to have half of his orders from overseas including the US and Europe.

"These (overseas) orders have not been satisfactory this year because of the pandemic," he sighed, adding that he is gradually shifting his business to Chinese market, as the epidemic situation in China has largely improved.

A few potential buyers have reached Sabeaallil via Douyin. One of them bought over 100,000 yuan ($14,860) of toys from him, which Sabeaallil described as "a good beginning."

Sabeaalli is not the only expatriate in Yiwu interested in livestreaming promotion. According to Yiwu Industrial and Commercial College (YWICC), "quite a few" of its 140 overseas students say they will try their hand in the livestreaming e-commerce industry after graduation.

The college is offering its overseas students courses on China's livestream selling market. "Training content includes how to attract more followers, how to select suitable products, how to interact with audiences and how to shoot and edit short videos," director of YWICC's School for International Education surnamed Chen told the Global Times.

As the only university in Yiwu, YWICC has had more than 10,000 international students since 2007. This year, 70 percent of the college's current overseas students hope to find a job or start up business in Yiwu, Chen said.