WORLD 'Hard and messy' US evacuation from Afghanistan smashes its image

'Hard and messy' US evacuation from Afghanistan smashes its image 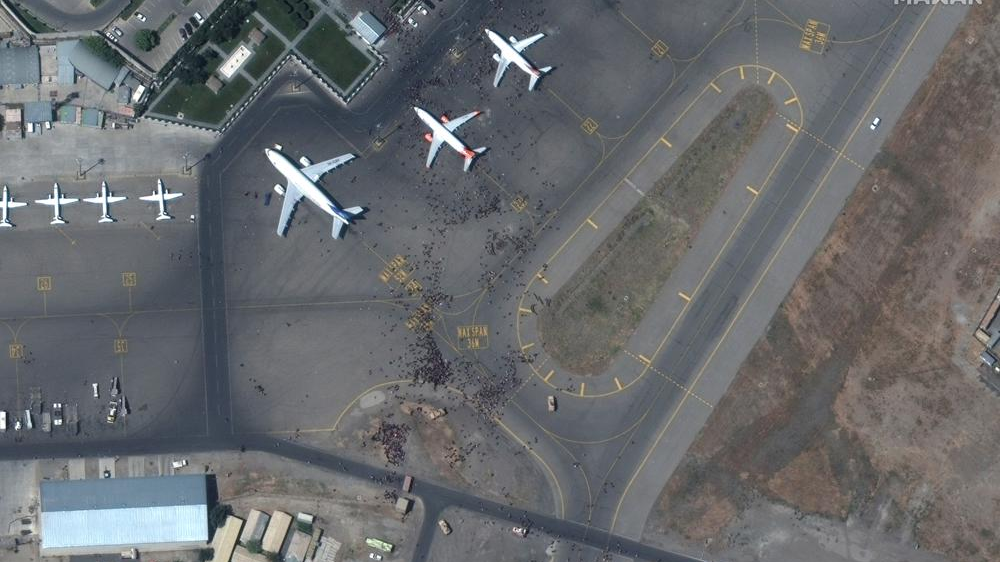 US President Joe Biden addressed the nation on Monday after Afghanistan fell to the Taliban. In the speech, Biden admitted that the ending of America's military involvement in Afghanistan has been "hard and messy," and "far from perfect."

Biden reiterated that he did not regret his decision to end America's war in Afghanistan. He said he won't shrink from his share of responsibility.

However, the world is watching what happens in Kabul. Thousands of Afghans stormed Kabul airport, and US soldiers aimed weapons at them to prevent them from entering the privileged American area in the airport.

Still, hundreds of Afghans swarmed the runway, clinging to the outside of a US military plane as it took off. Some hung on to the plane's tires, then fell and died. US troops opened fire on Afghan civilians to clear the runway for the takeoff of its planes. At least five people died in Kabul airport. In another shocking scene, Afghans were rushing to break into a passenger boarding bridge to force their way into a departing airplane.

These viral videos and pictures have spread on social media all around the world. Netizens compared these images with the fall of Saigon in 1975. This is another blow to the US international image.

International media criticized the role of US in this human rights disaster. Russian Foreign Ministry spokeswoman Maria Zakharova pointed out that there has been no reaction from Washington to human rights violations in Kabul and the appeals of Afghan citizens for evacuation at Kabul airport, TASS reported on Monday.

The New York Times commented that Afghanistan's unraveling may strike another blow to US credibility. The retreat heightens the sense that America's backing is no longer unbounded. The issue for America's allies and others is a loss of "credibility," said Jean-Marie Guéhenno, former French and United Nations diplomat.

According to AFP, after two decades in Afghanistan, America's longest war was ending with the image of the US in tatters. To some observers, the debacle following the withdrawal of US troops will inevitably weaken the US on the global stage at a time when Biden was speaking of rallying democracies.

"America's credibility as an ally is diminished because of the way the Afghan government was abandoned beginning with the Doha talks," said Husain Haqqani, Pakistan's former ambassador to the US. "That envoys of the mightiest nation on earth can be duped as they were in Doha, and its leaders ignored so easily as they have been in the final days, will encourage others to engage in duplicitous diplomacy," Haqqani said.

Biden noted the US trained "an Afghan military force of some 300,000 strong -- incredibly well equipped." But the country of Afghanistan is poor, and the Afghans are poor.

According to Global Times, the reality is that only 30 percent of the population in Afghanistan has a stable power supply, lacking infrastructure that supports advanced military equipment. There is only a 40 percent of the literacy rate. The per capital GDP of Afghanistan is $508, as US paid $2 trillion for its 20-year long Afghan war.

The Associated Press noted the Afghan war demonstrated the limits of money and military might to force a Western-style democracy on a society not ready or willing to embrace it.

Chinese analysts said the failure in Afghanistan could deeply damage the US image as a hegemon. Washington is still able to export chaos to other countries and regions with the pretext of "values, international orders or human rights" and people worldwide should learn from the current situation in Afghanistan, experts noted.

The UN Security Council held an emergency meeting to discuss the situation in Afghanistan on Monday. The international community expressed their concerns about Afghanistan's future. Pan Guang, a senior expert on counter-terrorism and Afghan studies at the Shanghai Academy of Social Sciences, said that the possibility of a humanitarian crisis looms if the Taliban fail to restore peace and order.

Obviously, the Americans are rushing to leave Afghanistan, but the suffering of Afghan people is far from over.

In a commentary entitled "The 'fall of Kabul' rings the funeral bell of US hegemony" published on Monday, the Xinhua News Agency said the US can simply leave but it has left Afghan people with endless pain.

In the past 20 years, more than 30,000 civilians have been killed directly or indirectly by US forces, and more than 60,000 have been injured, with 11 million refugees. This proves that the US is the biggest exporter of chaos in the world, and its hegemony has caused too many tragedies.

Experts warned that Washington is still able to export chaos by force, and the world still needs to stay alert, and learn from the current situation in Afghanistan.