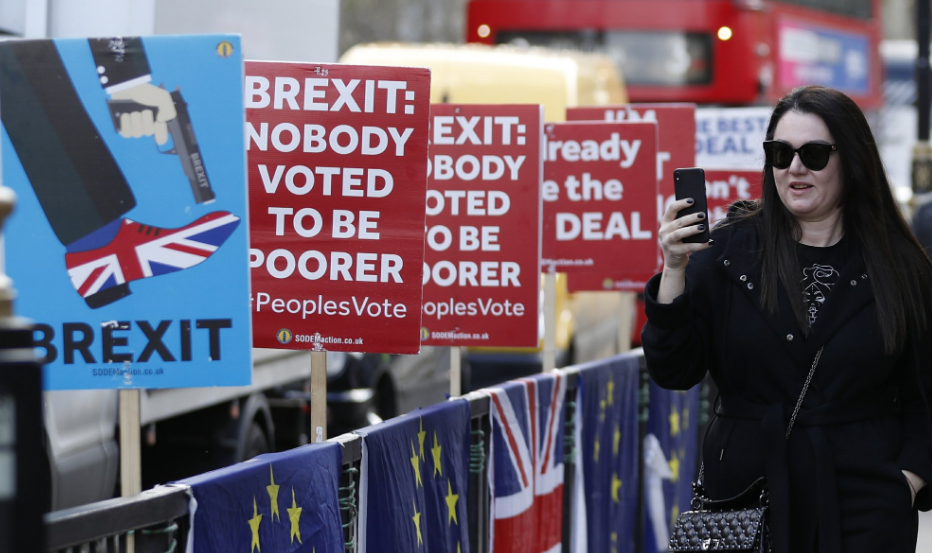 A woman takes pictures on her smart phone as she walks past anti-Brexit placards near the House of Parliament in London on March 26, 2019. (Photo: AP)

London (People's Daily) - So-called “B-day” has been postponed after repeated rejections from UK MPs on the withdrawal agreement from the British government and the EU as both sides remain unwilling to see a “no-deal Brexit” happen.

British media used “B-day” to describe March 29, the day the UK was scheduled to exit the EU.

This week, MPs will vote on multiple Brexit options. During the first round of “indicative votes,” not one proposal received a majority. Supporters hope to see a different outcome, preferably a clear path to Brexit.

According to the BBC, if the House of Commons achieves a clear result on Monday, which also gains support from the government, then the government will try to implement the decision, and apply for a further extension from the EU.

However, the alternative plans gain majority support, or the government refuses the plan, then the UK will face the possibility a “no-deal” Brexit. Alternatively, the UK can also apply for a Brexit cancellation or an extension. This could lead to UK’s participation in the European Parliament election, but UK government would rather avoid both scenarios.

Aside from a “no-deal” Brexit and cancelling or accepting the existing withdrawal agreement, the UK has several options.

According to Sky News, compromising on a custom union, general election, second referendum and forming a cross-party government are other deadlock options the UK faces. However, given the current situation, it is hard to say which option has a higher possibility and which is less possible to happen.

On the other hand, options also mean uncertainty, which hurts the economy. According to the latest data released by UK’s Office for National Statistics (ONS), UK GDP grew by 0.2 percent in the three months to the end of January, down from 0.7 percent in the previous three months.

“Brexit helped drag investment down 2.5 percent in the final quarter of 2018 compared to a year earlier, its worst slump since the financial crisis,” said ONS officials.