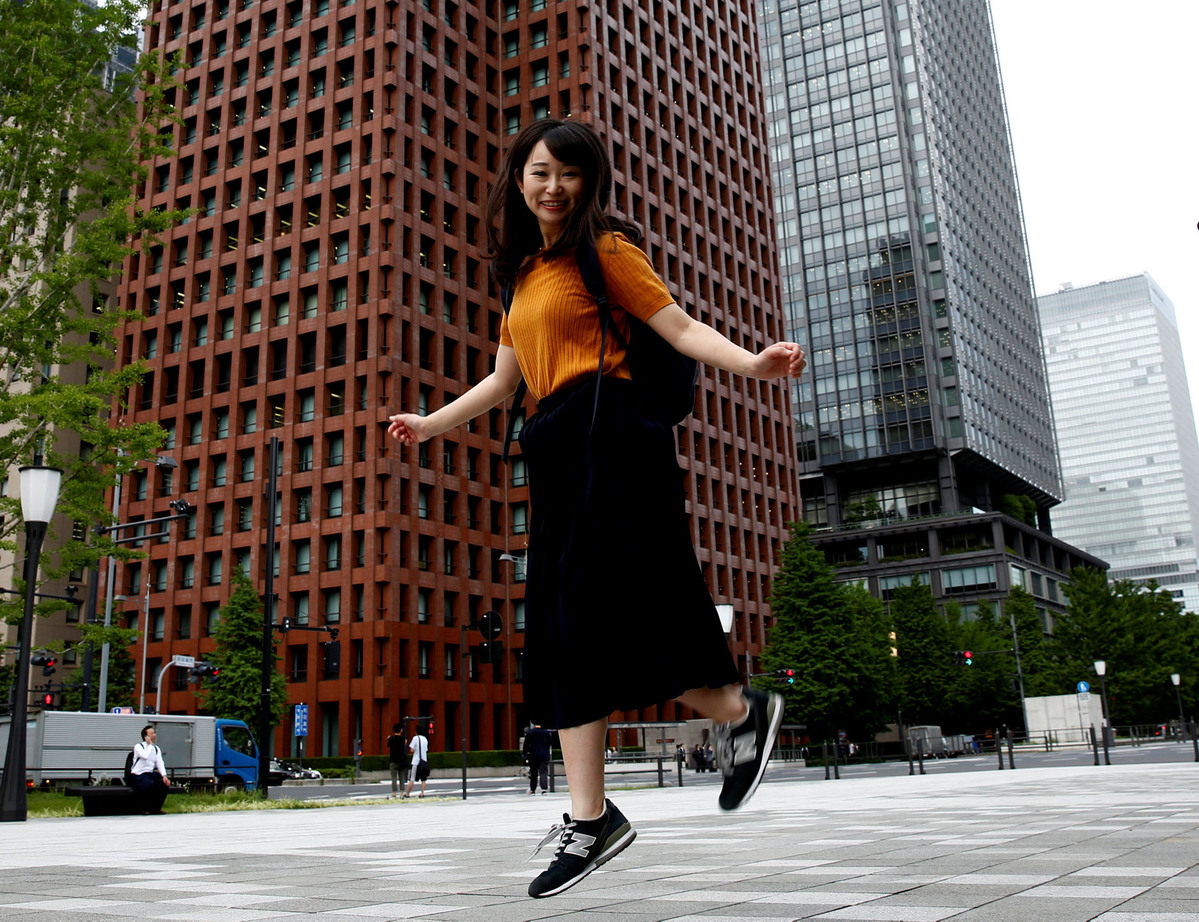 Yumi Ishikawa jumps as she poses in a business district during an interview with Reuters in Tokyo, on Tuesday. (Photo: China Daily)

Nearly 20,000 women have signed an online petition demanding the government ban companies from requiring female employees to wear high heels on the job－which is a type of gender discrimination, says Yumi Ishikawa, who started the drive.

The #KuToo campaign is a play on the word for shoes, or "kutsu" in Japanese, and "kutsuu" or pain.

Ishikawa, a 32-year-old actress and freelance writer, hopes the petition she submitted to the health ministry on Monday will lead to changes in the workplace and greater awareness about gender discrimination.

She launched the campaign after tweeting about being forced to wear high heels for a part-time job at a funeral parlor. The tweet drew an overwhelming response from women.

"After work, everyone changes into sneakers or flats," she wrote in the petition, adding that high heels can cause bunions, blisters and strain the lower back.

"It's hard to move, you can't run and your feet hurt. All because of manners," she wrote, pointing out that men don't face the same expectations.

While many Japanese companies may not explicitly require female employees to wear high heels, many women do so because of tradition and social expectations.

Ishikawa said her campaign had received more attention from international media outlets than domestic ones, and there was a tendency in Japan to portray the issue as a health one, not a gender one.

"Japan is thickheaded about gender discrimination," she told Reuters in an interview. "It's way behind other countries in this regard."

Japan ranks 110th out of 149 countries in the World Economic Forum's gender-equality ranking.

"We need people to realize that gender discrimination can show up in lots of small ways," Ishikawa said, from how women are treated by their bosses to expectations that women will do all the housework and child-rearing even if they work.

In decades past, businessmen were expected to wear neckties, but that has changed since the government started a "cool biz" campaign in 2005 to encourage companies to turn down air-conditioners and reduce electricity use.

"It would be great if the country had a similar kind of campaign about high heels," said Ishikawa.

She said she had been the target of online harassment over the campaign, mostly from men.

"I've been asked why I need to make such a big deal about this: Can't I just work this out with your company?" she said.

"Or that I'm selfish, that this is just part of etiquette."

The health ministry said it was reviewing the petition and declined to comment further.