WORLD 'Look at me:' Women confront Flake on Kavanaugh support

'Look at me:' Women confront Flake on Kavanaugh support 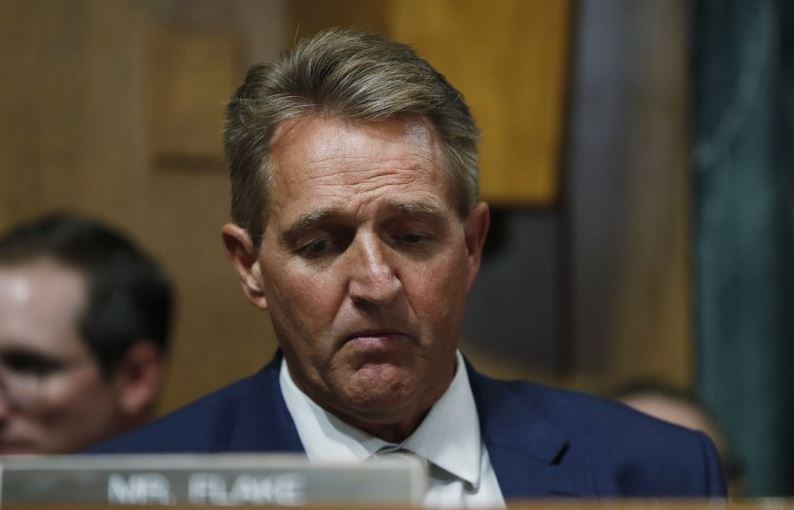 Two women cornered Sen. Jeff Flake in an elevator Friday, moments after he announced he would vote to confirm Brett Kavanaugh to the Supreme Court as emotions ran high in the U.S. Capitol.

Through tears, the women implored the Arizona Republican to change his mind. A day earlier, the senators heard hours of testimony for Christine Blasey Ford, a California psychology professor who told them Kavanaugh sexually assaulted her when the two were teenagers. Kavanaugh has denied that he sexually assaulted Ford.

Flake was on his way to the Senate Judiciary Committee as both women told him they were sexual assault survivors.

“On Monday, I stood in front of your office,” Ana Maria Archila, co-Executive Director of the Center for Popular Democracy and the Center of Popular Democracy Action, told Flake. “I told the story of my sexual assault. I told it because I recognized in Dr. Ford’s story that she is telling the truth. What you are doing is allowing someone who actually violated a woman to sit on the Supreme Court.”

The confrontation could be seen in TV footage blocking the Arizona senator from closing the elevator door. Both women spoke with anguish.

A second woman cried out: “I was sexually assaulted and nobody believed me. I didn’t tell anyone, and you’re telling all women that they don’t matter, that they should just stay quiet because if they tell you what happened to them you are going to ignore them.”

“That’s what happened to me, and that’s what you are telling all women in America, that they don’t matter,” she said through tears.

She begged Flake to look her in the eye. She said: “Don’t look away from me. Look at me and tell me that it doesn’t matter what happened to me.”

Flake, cornered in the elevator, shifted between looking at them and looking down. He said, “Thank you,” but didn’t response to questions on whether he believed Ford’s testimony.

When a reporter asked whether he wanted to respond to the women’s questions, he said no.

“I need to go to the hearing. I just issued a statement. I’ll be saying more as well,” he said.

The elevator doors closed. A committee vote is set for 1:30 p.m. on whether to recommend Kavanaugh’s confirmation to the full Senate.

The women do not identify themselves in the video, but Archila’s company sent a press release following the confrontation confirming it was Archila speaking on camera.