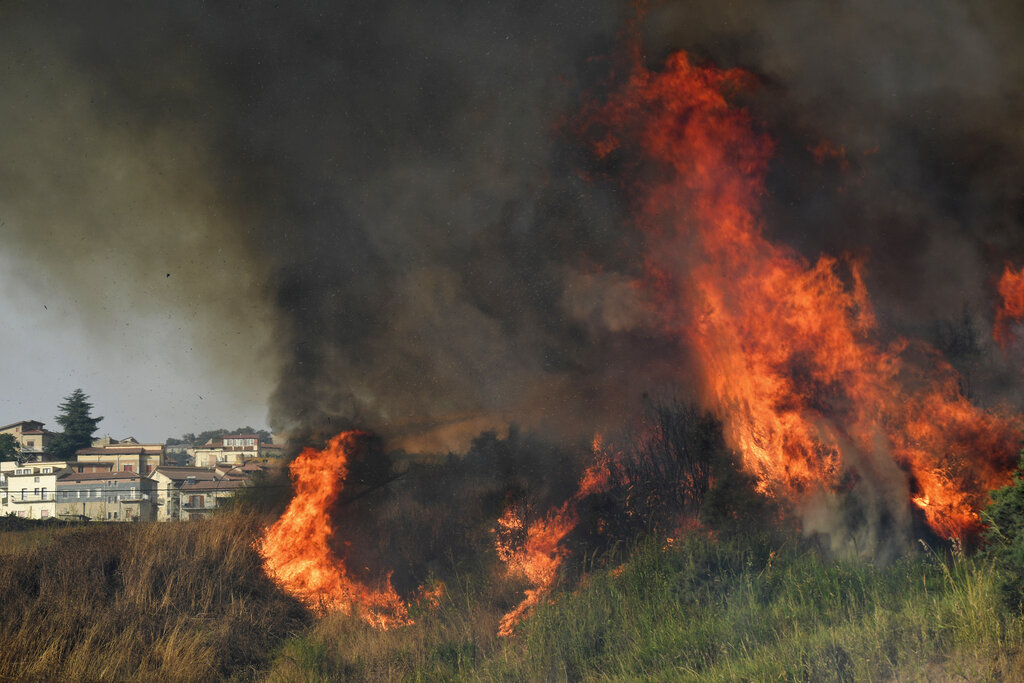 A view of a fire in the Municipality of Blufi, in the upper Madonie, near Palermo, Sicily, Italy, as many wildfires continue plaguing the region. (Photo: AP)

A blistering heatwave is sweeping across Italy this week, fuelling fires in the south of the country, notably Sicily and Calabria, where a UNESCO-designated natural park is threatened.

Temperatures hit 47 degrees Celsius (116 degrees Fahrenheit) in Sicily on Tuesday, near Syracuse, with meteorologists warning that Italy's all-time record of 48.5 degrees, in Sicily in 1999, could be beaten on Wednesday.

Elsewhere in the south of Italy, the anticyclone dubbed Lucifer was forecast to send the mercury rising to 39-42 degrees Wednesday before sweeping northwards, with weekend temperatures of up to 40 degrees in the central regions of Tuscany and Lazio, which includes Rome.

The island of Sicily and the region of Calabria have already been battling fires throughout the summer -- many caused by arson but fuelled by the heat -- with firefighters recording 300 interventions in the past 12 hours.

The Madonie mountain range, near the Sicilian capital Palermo, has for several days been besieged by flames that have destroyed crops, animals, homes and industrial buildings.

Sicily's governor, Nello Musumeci, called for a state of emergency to be declared for mountains, while Agriculture Minister Stefano Patuanelli visited Wednesday to meet local mayors.

The deputy head of environmental NGO WWF Italy, Dante Caserta, called for more resources, such as air support, to quell the flames "or it will be too late, and we will lose forever a priceless heritage".

Blazes have also devastated Sardinia, with 13 fires recorded during the day on Tuesday. Over 20,000 hectares (50,000 acres) burned last month in the west of the island during the worst fires seen in decades.