WORLD 'One giant leap': US marks Apollo mission 50 years on

'One giant leap': US marks Apollo mission 50 years on 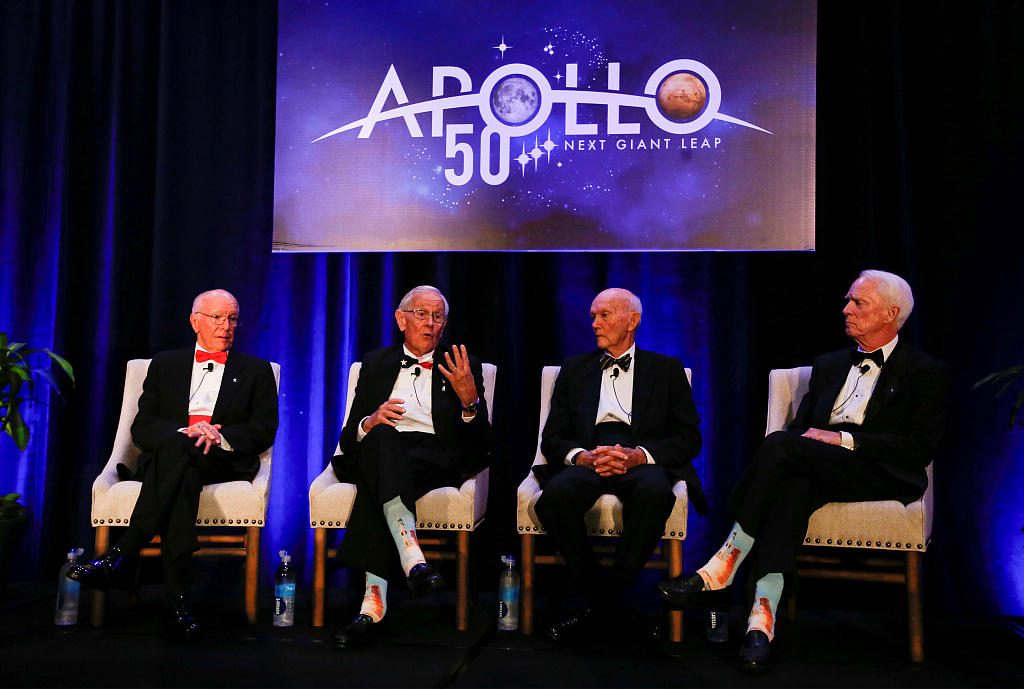 Fifty years after a mighty rocket set off from Florida carrying the first humans to the Moon, a veteran of the Apollo 11 crew returned to its fabled launch pad Tuesday to commemorate "one giant leap" that became a defining moment in human history.

"We crew felt the weight of the world on our shoulders, we knew that everyone would be looking at us, friend or foe," command module pilot Michael Collins said from the Kennedy Space Center.

He and Buzz Aldrin, who piloted the module that landed on the Moon's surface, are the two surviving members from the mission that would change the way humanity saw its place in the universe.

Their commander Neil Armstrong, the first man on the Moon, died in 2012 aged 82.

The spacecraft took four days to reach the Moon, before the module known as the "Eagle" -- whence the iconic phrase "the Eagle has landed" -- touched the lunar surface on July 20, 1969.

Armstrong emerged a few hours later, descending to the foot of the ladder, as he uttered the immortal line: "That's one small step for man; one giant leap for mankind."

Collins remained in lunar orbit in the command module Columbia, their only means of returning to Earth.

"I always think of a flight to the Moon as being a long and fragile daisy chain of events," the 88-year-old said at launch pad 39A, at the first of many events planned across the week.

These include the return of Armstrong's suit to the Air and Space Museum in Washington after more than a decade of restoration work.

The Washington Monument will be lit up between July 16 and 18 with a life-size, 363-foot (111-meter) projection of the colossal Saturn V rocket built by ex-Nazi Wernher Von Braun.

Collins described how the mission was broken into discrete goals such as breaking free of the Earth's gravity or slowing down for lunar orbit.

"The flight was a question of being under tension, worrying about what's coming next. What do I have to do now to keep this daisy chain intact?"

Unlike Collins, Aldrin has remained relatively elusive and did not participate at Tuesday's launchpad event.

Aging but active on Twitter, and often seen in stars-and-stripes socks or ties, the 89-year-old has faced health scares and family feuds, culminating in a court case over finances, which was settled in March.

He is the second of 12 men to have set foot on the Moon, only four of whom are still alive.

Collins has been fielding questions for half a century about whether he felt lonely or left out.

"I was always asked, wasn't I the loneliest person in the whole lonely history of the whole lonely solar system when I was by myself in that lonely orbit?" he said. "And the answer was, 'No, I felt fine!'

"I would enjoy a perfectly enjoyable hot coffee, I had music if I wanted to. Good old Command Module Columbia had every facility that I needed, and it was plenty big and I really enjoyed my time by myself instead of being terribly lonely."

The Apollo 11 crew traveled with white mice that would presumably serve as a warning signal if the crew had been infected by a mysterious space illnesses.

"Whether we had a wonderful successful flight or something that was a total disaster for humanity depended on the health of those white mice," Collins said.

After returning to Earth, the astronauts spent weeks in quarantine before embarking on a global tour.

Collins said he was later offered command of the Apollo 17 mission, but turned it down to spend more time with his wife and children.

Despite being an introvert, Armstrong was the best spokesman among the crew, Collins said, making audiences feel like they had been along for the ride.

"He was very intelligent, he had an extremely wide background of knowledge, scientific knowledge, historical knowledge."

No humans have returned to the Moon since 1972, the year of the final Apollo mission.

But they both ran up against a Congress that wasn't inclined to fund the adventures, while the tide of public opinion had also turned since president John F. Kennedy roused the nation to action in the 1960s.

President Donald Trump has relaunched the race to re-conquer the Moon -- this time with the first woman -- and to journey onwards to Mars.

But the deadlines (2024 and 2033 respectively) appear unrealistic and have caused turbulence within the space agency.

Separately, celebrations were held in Huntsville, Alabama, the birthplace of the Saturn V. The giant rocket was developed by von Braun, who came to the United States at the end of World War II with his team of ex-Nazi engineers and scientists.