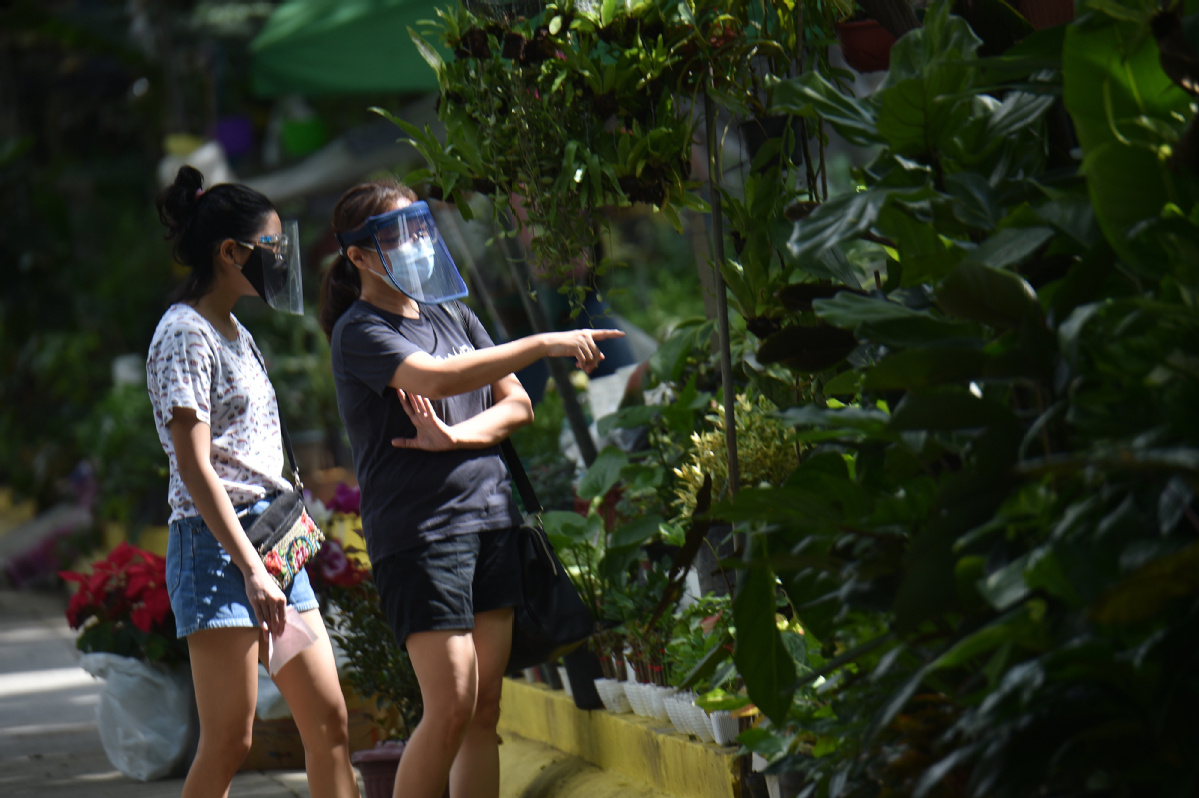 Residents show great interest in plants for sale at a nursery in Manila on Oct 29. [TED ALJIBE/AGENCE FRANCE-PRESSE]

MANILA－A gardening craze dubbed a "plantdemic" has spread across the Philippines after coronavirus restrictions fueled demand for greenery, sending plant prices soaring and sparking a rise in poaching from public parks and protected forests.

Photos of delicate flowers and broad-leafed foliage cultivated in backyards and on balconies have flooded social media as housebound Filipinos turn to nature to relieve stress and boredom.

"It's unbelievable. People are super interested in plants these days," said landscape gardener Alvin Chingcuangco, who has seen prices for some varieties of monsteras reach 55,000 pesos ($1,140) each, compared with 800 pesos before the pandemic.

Manila plant seller Arlene Gumera-Paz said her daily turnover tripled after she reopened her doors following months of lockdown. Demand remained robust even as prices for the most popular varieties of indoor plants, such as alocasias, spider plants and peace lilies, doubled or even quadrupled.

"It's hard to understand people. When plants were cheap, they were ignored," said the 40-year-old, who buys her plants in bulk from growers in nearby provinces.

But as demand has grown, authorities have warned that many plants on the market may not have been legally obtained.

Rangers patrolling the forests of Zamboanga on Mindanao island in the country's south for illegal loggers and wildlife poachers were ordered to watch out for plant thieves, after officials noticed some species posted on social media could only be found in the region's protected areas.

"Prior to the pandemic we hadn't observed many plant poachers," said Maria Christina Rodriguez, Zamboanga regional director for the Department of Energy and Natural Resources.

"This only became popular during the lockdown."

Removing threatened species from forests is illegal under Philippine law and carries hefty penalties. Collecting other native plants is allowed but only with a permit.

The stress of lockdown caused by the pandemic prompted many Filipinos to seek solace in their gardens, earning themselves the nicknames "plantitos" and "plantitas", or plant uncles and aunties.

"The safest way to make yourself happy is through growing little things," said Norma Karasig Villanueva, former president of the Philippine Horticultural Society.

Longtime gardener Ivy Bautista, 30, said tending her plants helped to "kill boredom" and earn some money by selling cuttings from her extensive collection. But she opposes the "insane" prices charged by other sellers, fearing it could drive plant poaching.

In recent editorial titled Plantdemic, the leading newspaper Philippine Daily Inquirer decried the high prices and urged buyers to get their plants from sellers "with legitimate, lawful sources".