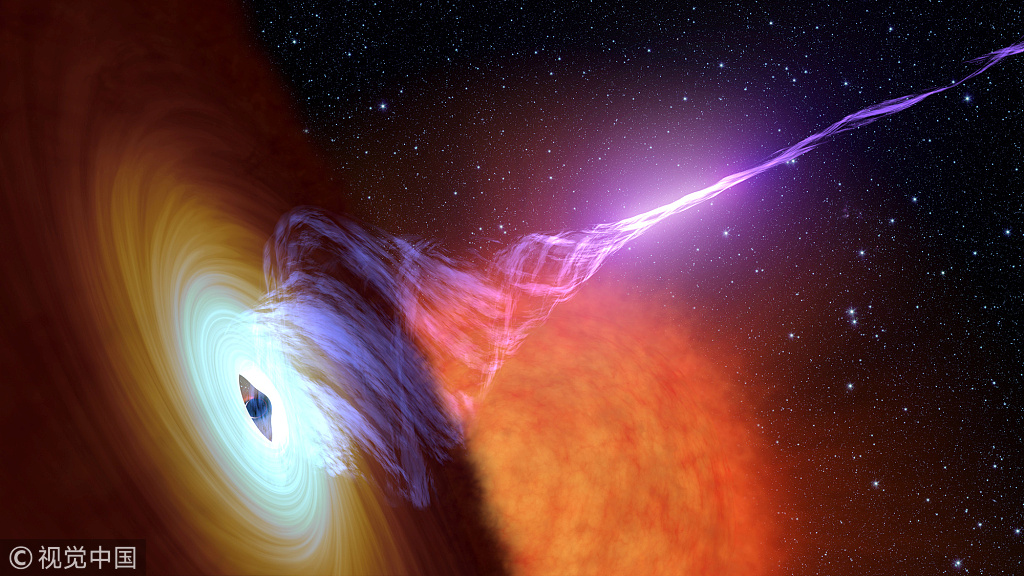 This photo released October 30, 2017 shows a black hole with an accretion disk, a flat structure of material orbiting the black hole, and a jet of hot gas, called plasma. (Photo: VCG)

Astronomers in Canada have detected a mysterious volley of radio waves from far outside our galaxy, according to two studies published Wednesday in Nature.

What corner of the universe these powerful waves come from and the forces that produced them remain unknown.

The so-called repeating fast radio bursts were identified during the trial run last summer of a built-for-purpose telescope running at only a fraction of its capacity.

Known by its acronym CHIME, the world's most powerful radio telescope -- spread across an area as big as a football pitch -- is poised to detect many more of the enigmatic pulses now that it is fully operational.

"At the end of the year, we may have found 1,000 bursts," said Deborah Good, a PhD student at the University of British Columbia and one of 50 scientists from five institutions involved in the research.

Fast radio bursts (FRBs) flash only for a micro-instant, but can emit as much energy as the Sun does in 10,000 years.

Exactly what causes these high-energy surges of long waves at the far end of the electromagnetic spectrum remains the subject of intense debate.

More than 60 bursts have been catalogued since 2007, but only one other -- observed in 2012 at the Arecibo Observatory in Puerto Rico -- was a repeater.

"FRBs, it seems, are likely generated in dense, turbulent regions of host galaxies," Shriharsh Tendulkar, a corresponding author for both studies and an astronomer at McGill University, told AFP.

Cosmic convulsions created by the turbulent gas clouds that give rise to stars, or stellar explosions such a supernovae, are both possible incubators.

But consecutive radio bursts are a special case.

"The fact that the bursts are repeated rules out any cataclysmic models in which the source is destroyed while generating the burst," Tendulkar added.

"An FRB emitted from a merger of two neutron stars, or a neutron star and a black hole, for example, cannot repeat."

It is not yet clear whether the breeding grounds of repeating bursts are different from those that produce only a single radio pulse.

Significantly, the 2012 and 2018 "repeaters" have strikingly similar properties.

Most FRBs spotted so far have wavelengths of a few centimetres, but these had intervals of nearly a metre, opening up a whole new line of inquiry for astronomers.

Could these enigmatic radio pulses point to intelligence elsewhere in the Universe? Might they be messages in a bottle?

"As a scientist I can't rule it out 100 percent. But intelligent life is not on the minds of any astronomer as a source of these FRBs."

Constructed in British Columbia, CHIME is composed of four, 100-metre long half-pipe cylinders of metal mesh which reconstruct images of the sky by processing the radio signals recorded by more than a thousand antennas.

"This signal processing system is the largest of any telescope on Earth," the researchers said in a communique.

The other institutions with leading roles are the University of Toronto, the National Research Council of Canada, and the Perimeter Institute.