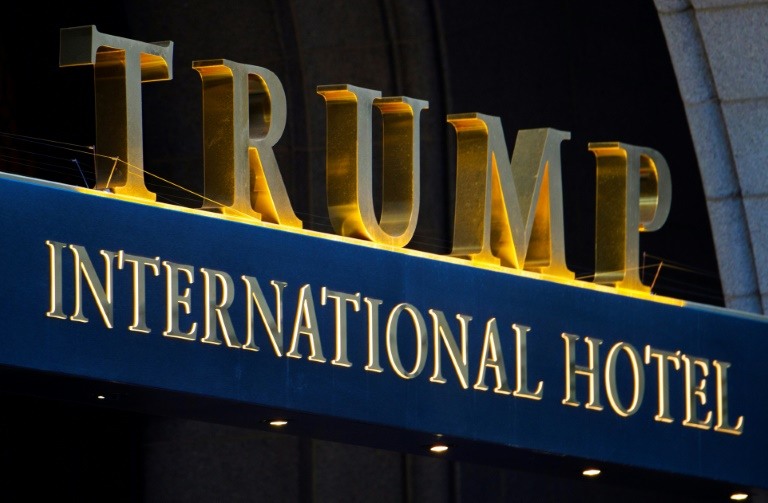 The word "shithole" -- which President Donald Trump allegedly used to describe countries from which he does not want immigrants coming to the US -- has been projected along with other messages onto his Washington hotel.

Trump is said to have made the remarks -- which he has denied but which a US Senator who was present confirmed -- at a meeting with legislators, setting off a firestorm of criticism when they became public.

"NOT A DC RESIDENT? NEED A PLACE TO STAY? TRY OUR SHITHOLE. THIS PLACE IS A SHITHOLE," read successive messages projected over the entrance of the Trump International Hotel in central Washington, according to a video posted on social media.

A flood of grinning feces emojis then stream out of the hotel's entrance as "SHITHOLE" appears in larger text above it.

Another clip shows the word "SHITHOLE" over the entrance along with an arrow pointing to the door.

The videos were posted on the Twitter account of Robin Bell, who has staged other projection protests and been likened to a "hit-and-run editorial writer" by The Washington Post.

The alleged expletive emerged out of a Thursday meeting between Trump and legislators.

After lawmakers raised the issue of protections for immigrants from African nations, Haiti and El Salvador, the president reportedly demanded to know why the United States should accept immigrants from "shithole countries," rather than -- for instance -- wealthy and overwhelmingly white Norway.

Trump on Friday tweeted a convoluted denial about the comments, which were reported by The Washington Post and The New York Times.

But Democratic Senator Dick Durbin said Trump had specifically asked, "Do we need more Haitians?" before launching into a diatribe about African immigration.

Trump then "said things which were hate-filled, vile and racist," Durbin said, adding that "shithole" was "the exact word used by the president, not just once but repeatedly."