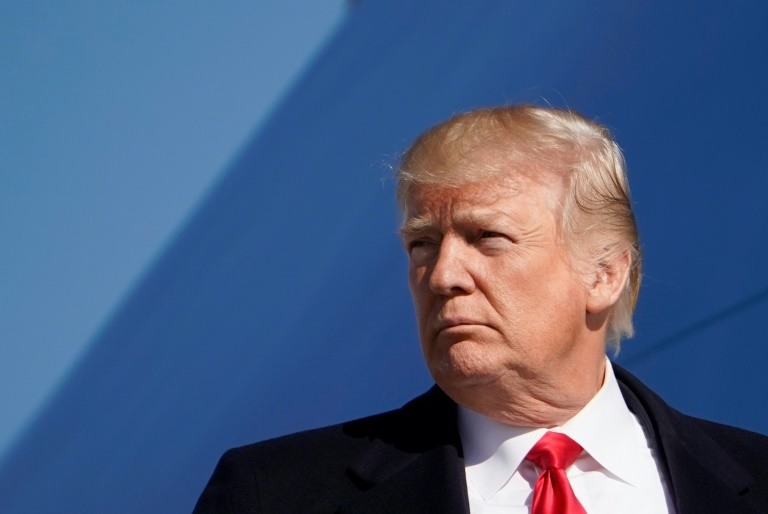 President Donald Trump heaped pressure on Democrats Friday to yield in an acrimonious funding showdown that threatens to shut down the US government when money runs out at midnight -- a year to the day after the Republican president took office.

The president has put on hold plans to fly to Florida for an anniversary dinner at his Mar-a-Lago estate to be close by for what was expected to be a night of down-to-the-wire votes in the US Senate.

A White House official said the president would remain in Washington "until we pass a government funding measure."

The Republican-controlled House of Representatives pushed through a measure late Thursday, 230-197, to extend funding for the federal government through February 16.

But Democrats appeared determined to block it in the Senate, where Republicans hold a slender majority and may need as many as a dozen Democratic crossover votes to reach a 60-vote majority.

"Democrats are needed if it is to pass in the Senate - but they want illegal immigration and weak borders," Trump said on Twitter.

White House budget director Mick Mulvaney put the odds of a shutdown at "50-50."

"We were operating under sort of a 30 percent shutdown" assumption on Thursday, he told reporters. "I think we're ratcheting it up now."

With mid-term elections looming later this year, Democrats and Republicans both risk being blamed by voters if the government grinds to a halt over lack of funds.

The finger-pointing already has begun as the sides maneuver to lay blame and put their own role in the best possible light.

There have been four government shutdowns since 1990. In the last one in 2013, more than 800,000 government workers were put on temporary leave.

Essential functions like the military, law enforcement, the White House and Congress would continue working but with reduced staff. Some agencies, museums and national parks, would shut down altogether.

The Pentagon issued a guidance confirming that active duty military, including those in combat, would work without pay as will essential civilians. But others in the massive bureaucracy will be sent home without pay.

"The Department will, of course, continue to prosecute the war in Afghanistan and ongoing operations against Al-Qaeda and Islamic State of Iraq and Syria, including preparation of forces for deployment into those conflicts," said Patrick Shanahan, the Pentagon's number two.

Senate Minority Leader Chuck Schumer said if agreement is not reached by Friday night, Democrats would support a shorter-term funding measure that would "give the president a few days to come to the table."

But House Majority Leader Kevin McCarthy was quoted as telling reporters the chamber would adjourn as planned on Friday afternoon -- all but guaranteeing a shutdown unless a last-minute deal is struck on the existing bill.

Mitch McConnell, the Senate Republican Majority Leader, said the House bill provides for four weeks of funding, enough to allow talks to continue "without throwing the government into disarray for no reason."

"The leader is looking to deflect blame, but it just won't work," said Schumer.

Democrats are hoping to force a compromise that would protect from deportation the so-called "Dreamers," the more than 700,000 immigrants who entered the country illegally as children and are now in a legal limbo.

Negotiations with the White House on a bipartisan compromise blew up last week after Trump reportedly referred to African nations and Haiti as "shithole countries."

Friday morning, Paul Ryan hit out at the Democrats on Twitter, accusing them of "taking funding for the government and funding for our troops hostage" over "unrelated policy."

"They are treating our men and women in uniform like bargaining chips," he fumed.

Trump's unpredictable Twitter outbursts and sudden changes of position also have bedeviled Republican leaders as they maneuver to cut a deal.

Schumer described Trump as "like a Sphinx on this issue," a sentiment Republicans also appeared to share.

"Thinking people change their minds all the time. You do, I do, most Americans do when they test their assumptions against the arguments of others," Senator John Kennedy, a Republican from Louisiana said on CNN Friday.

"Having said that, we need to know where the president stands. Let's suppose we reach an agreement with the Democrats, and I think we will, I want to know the president is going to sign it."