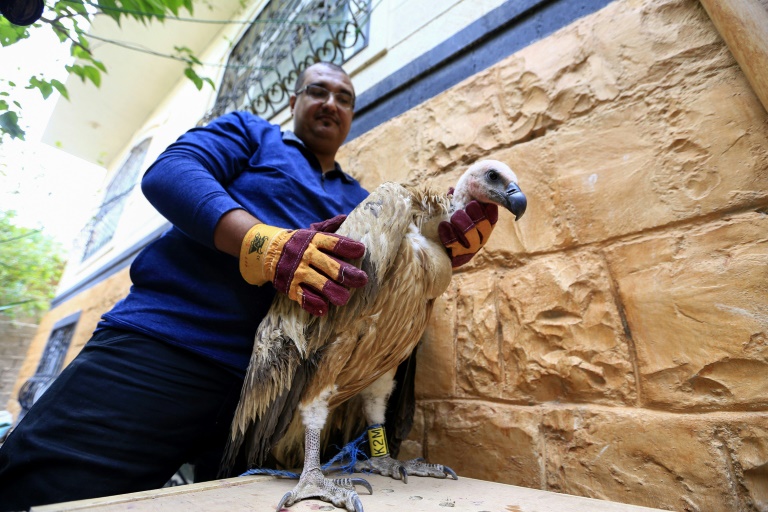 Griffon vulture Nelson was briefly detained by Yemeni fighters suspicious of the satellite transmitter tagged to his wing after he came down in the war-torn country. (Photo: AFP)

Griffon vulture Nelson crossed into war-torn Yemen in search of food but ended up in the hands of Yemeni fighters -- and temporarily in jail for suspected espionage.

The sand-coloured bird came down in the country's third city of Taez, an unusual move for a young vulture that can soar for long distances across continents in search of food and moderate weather.

Nelson, approximately two years old, embarked on his journey in September 2018 from Bulgaria, where his wing was tagged and equipped with a satellite transmitter by the Fund for Wild Fauna and Flora (FWFF).

But he seems to have lost his way, eventually coming down into Taez -- under siege by Huthi rebels but controlled by pro-government forces, who mistook Nelson's satellite transmitter for an espionage device and detained the bird.

Forces loyal to the government believed that the GPS tracker attached to the bird may have been a spy device for the rebels.

Hisham al-Hoot, who represents the FWFF in Yemen, travelled from the rebel-held capital Sanaa to Taez to plead with local officials to release the helpless animal.

"The Bulgarian foreign ministry reached out to the Yemeni ambassador, who in turn contacted local officials (in Taez) and told them to immediately give the organisation the vulture."

Hoot said that the bird migrated from Bulgaria, to Turkey, to Jordan, Saudi Arabia and then Yemen -- where the FWFF lost track of the bird.

Nelson was MIA until April 5, when the conservation group received hundreds of messages from Yemenis concerned about the creatures' welfare.

Today, the locally-famous vulture is being properly fed and getting stronger every day.

"When we first took him, he was in very bad condition," said Hoot, adding that the bird was underweight.

Smiling, he puts on gloves and carefully handles the majestic creature -- blowing it a kiss.

Hoot said the bird will be released in two months when he believed Nelson will have regained his full strength and his wing -- broken somewhere during his journey -- will have healed.

"We thought at first it would take six months for him to heal, but now we don't think it will be more than two months," he said.

Hoot said that Nelson was not able to find any source of sustenance in Yemen.

"They can eat carcasses of dead animals, but now there is no more with the current situation of war.

"This is what forced him to come down and stopped him from completing his journey."

The four-year conflict in Yemen has unleashed the world's worst humanitarian crisis, according to the United Nations, with millions facing famine.

The war escalated in March 2015 when a coalition, led by Saudi Arabia and the United Arab Emirates, intervened to bolster the efforts of Yemeni President Abedrabbo Mansour Hadi.

Since then, at least 10,000 people -- most of them civilians -- have been killed and more than 60,000 wounded, according to the World Health Organization. Other rights groups estimate the toll could be much higher.