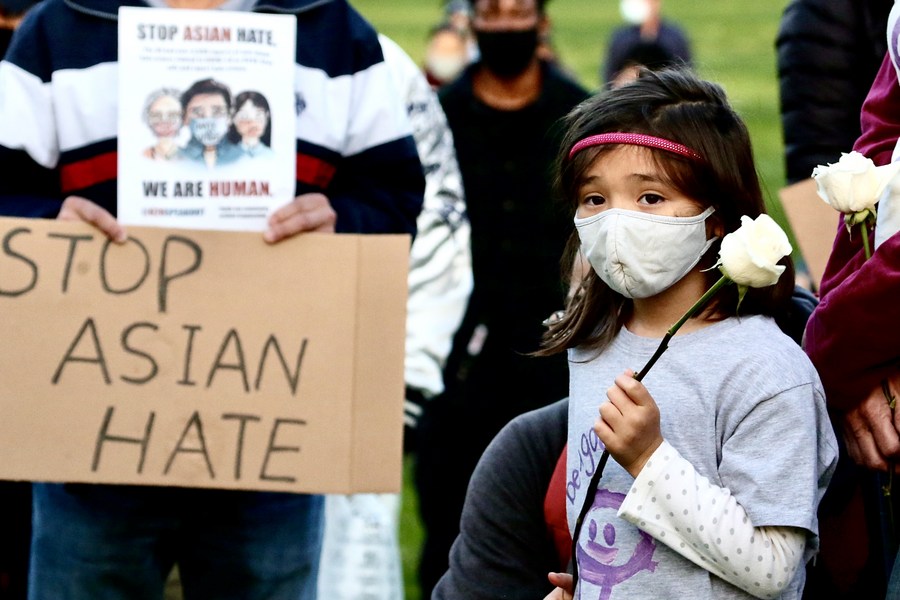 WASHINGTON, June 25 (Xinhua) -- Asian Americans from across the United States came to Washington, D.C. on Saturday to call for an end to racial hatred and violence that has increased significantly amidst the COVID-19 pandemic.

Under a burning sun in early summer, demonstrators gathered at the eastern end of the National Mall, with many of them holding self-made banners reading "Stop Asian Hate," "Asian and Proud" and "Love us like you love our food," for what organizers described as a "Unity March."

"We're here to ensure that our voices are heard as we try to make sure that there's racial equity and safety for our community, as well as all communities here in the United States," Christine Chen, executive director of Asian Pacific Islander American Vote, told Xinhua.

The rally came as the United States has largely moved on from COVID-19 though it continues to sicken nearly 100,000 individuals and take hundreds of lives in the nation on a daily basis. Meanwhile, hate against Asians in the country remains out there and poses a threat to their safety and well-being.

"As we know in the last few years there've been escalations in terms of attacks, not only on Asian Americans, but also on Blacks, Latinos, and other marginalized communities," Chen said.

Asian Americans and Pacific Islanders (AAPI) have reported nearly 11,000 hate incidents against them between March 2020 and December 2021, according to a report published earlier this year by Stop AAPI Hate.

Data from the nonprofit group tracking self-reported hate and discrimination against AAPI communities across the United States also found that verbal harassment made up the majority of those incidents. Physical assaults were the second-most reported, followed closely by deliberate avoidance of AAPI.

Jean Park, a high school student from Philadelphia, Pennsylvania, told Xinhua there was "a rise in Asian hate" even within her school after the pandemic broke out.

Some U.S. politicians and media outlets fabricated and spread conspiracy theories about COVID-19 to deflect the responsibility for a botched response to the public health crisis, fanning flames of racism and xenophobia in the nation with Asian Americans falling victim to their lies and rhetoric.

"There've been a lot of microaggressions and a lot of people think that because of the coronavirus, they can start blaming Asian Americans," said Park, who started a "Stop Asian Hate" walk in response to those racially-charged behaviors.

In remarks from the Rose Garden of the White House last month, U.S. Vice President Kamala Harris noted that "we have had people in positions of incredible power in our country scapegoating, people with the biggest pulpits spreading this kind of hate."

At the National Mall rally on Saturday, Anthony Lee, an artist from Detroit, Michigan, was holding up his latest painting for the 40th anniversary of the murder of Vincent Chin, a Chinese American killed in a racially motivated hate crime by two white autoworkers in 1982.

Chin was mistaken as a Japanese at a time when local politicians, union leaders and auto executives blamed Japan for the decline of the U.S. auto industry.

Lee said he had been concerned throughout the COVID-19 pandemic that similar things would happen somewhere in the country because of political stunts and scapegoating of Asians, a phenomenon that has repeated itself in times of economic downturns, wars and diseases.

"It's too convenient" for people to blame others for the problem, he said, adding, "We have to be better than that."

The study also revealed that only 29 percent Asian American respondents said they "completely agree" that they feel they belong and are accepted in the United States, the lowest of all racial groups. Meanwhile, 71 percent say they are discriminated against in the nation.

"Asian American communities have been disproportionately plagued by widespread violence, racism, and xenophobia that runs rampant across American society," Tiffany Chang, a Unity March spokesperson, said in a statement. "It's time for our nation's leaders to stop offering band-aid solutions to longstanding systemic issues."