WORLD 'Taking their last breath': IS hides among Syrian civilians

'Taking their last breath': IS hides among Syrian civilians 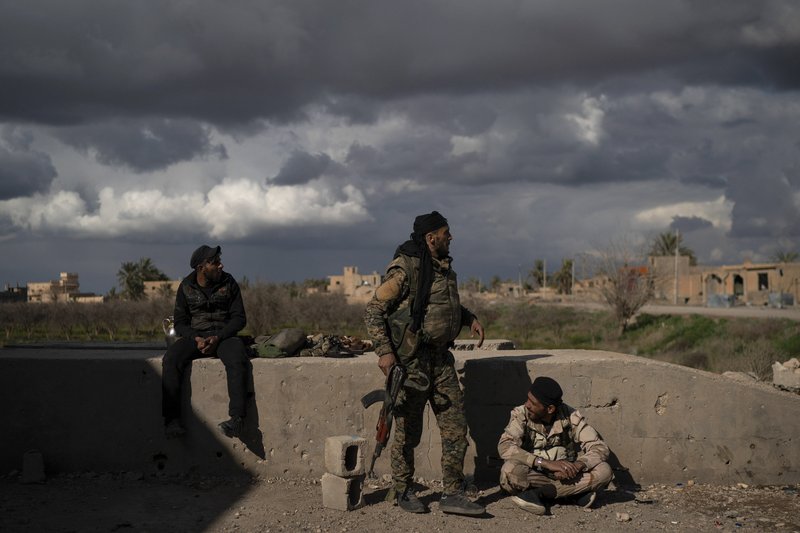 From a self-proclaimed caliphate that once spread across much of Syria and Iraq, the Islamic State group has been knocked back to a speck of land on the countries’ shared border. In that tiny patch on the banks of the Euphrates River, hundreds of militants are hiding among civilians under the shadow of a small hill — encircled by forces waiting to declare the territorial defeat of the extremist group.

A spokesman for the U.S.-backed Syrian Democratic Forces fighting the militants said Sunday that the group is preventing civilians from leaving the area, closing a corridor from which nearly 40,000 residents have managed to escape since December.

“They are taking their last breath,” said Dino, an SDF fighter deployed at a base near the front line in the village of Baghouz, about 2 kilometers (1¼ miles) from the militants’ last spot.

An Associated Press team visited the base Sunday, escorted by the SDF, driving past mostly one-story rural houses that were destroyed, a reminder of the cost of the battle. Occasional airstrikes and artillery rounds by the U.S.-led coalition supporting the SDF, meant to clear land mines for the advance, could be seen in the distance.

The road to the base passes through a number of villages and towns from which IS were uprooted in recent weeks.

In Hajin, a major center for the militants that fell to the SDF in December, some residents have begun to return but the town remains battered by the fighting and airstrikes. Small shops selling tools and construction material have sprung up.

For weeks, the militants fought desperately for their shrinking territory. Once in control of about a third of Syria and Iraq, they now are down to what SDF officials describe as a small tented village atop a network of tunnels and caves. But they are holding on to hundreds of civilians — some of them possibly hostages — taking cover among them at the edge of Baghouz, the village in eastern Deir el-Zour province.

“Regrettably, Daesh have closed all the roads,” preventing civilians from leaving, said Mustafa Bali, a spokesman for the Kurdish-led SDF, referring to IS by its Arabic acronym.

The extremists may include high-level commanders, and the presence of possible captives could explains the slow final push, they added.

As civilians trickled out of the enclave in recent weeks, the SDF and coalition officials screened them. Women and children were transferred to camps miles away; men suspected of links to the militant group were taken into custody at other facilities.

SDF commanders said some of the hostages taken from their force have been freed in recent days. Fighters at the base said one of their colleagues was set free in the last two days.

Khatib Othman, an SDF fighter, came back from the front line a few days ago to take a break. His brother, also an SDF fighter, was taken hostage by IS in the last weeks of fighting. He is now believed to be held in Iraq as a suspected militant and negotiations are underway to free him.

“We want to take revenge. We will not let the blood of our martyrs go to waste,” Othman said. “We are waiting for the civilians to go out, and we will go in and attack. It is a matter of days. They are under siege, no food and no water. They are encircled from four sides. They have to give up.”

He added that the militants are running out of ammunition.

The capture of the last pocket of IS territory in either Syria or Iraq would mark the end of a four-year global campaign to crush the extremist group’s so-called caliphate. It has been a long and destructive battle. In decline since 2016, the militant group was stripped of its self-declared capital of Raqqa, in Syria, in the summer of 2017, leaving behind a destroyed city whose residents are still struggling to return.

In Deir el-Zour, the SDF and the coalition have battled to uproot the militants from villages and towns on the eastern banks of the Euphrates since September.

Battle-hardened militants, including some of the group’s leading fighters and foreign commanders, had taken refuge in the area between Syria and Iraq. They fought back, dispatching suicide bombers from underground tunnels, deploying female fighters and launching counteroffensives that reclaimed many of the villages for weeks. Nearly 700 SDF fighters were killed in fighting that left at least 1,300 militants and over 400 civilians dead, according to the Syrian Observatory for Human Rights.

“We will very soon bring good news to the whole world,” Ciya Furat, an SDF commander, said Saturday at a news conference at the al-Omar Oil Field Base, miles from Baghouz.

But experts and U.S. defense officials warn that IS still poses a major threat and could regroup within six months if pressure is not kept up.

Thousands of IS fighters and their families have emerged in the past few months from the group’s last enclave. The SDF is holding 900 foreign fighters in lockups and camps in northern Syria, and their fate is a major concern, particularly as U.S. troops prepare to withdraw from Syria. In a tweet Sunday, U.S. President Donald Trump called on Britain, France and Germany and other European countries to take back their militants and put them on trial at home.

“The Caliphate is ready to fall,” Trump said. He suggested the alternative would be that the U.S. would be forced to release them.

“We do so much, and spend so much - Time for others to step up and do the job that they are so capable of doing. We are pulling back after 100% Caliphate victory!” he added.

The Kurdish forces and officials have said the same in recent weeks, appealing to countries to take back their militants.

Bali, the SDF spokesman, declined to comment on Trump’s statement.