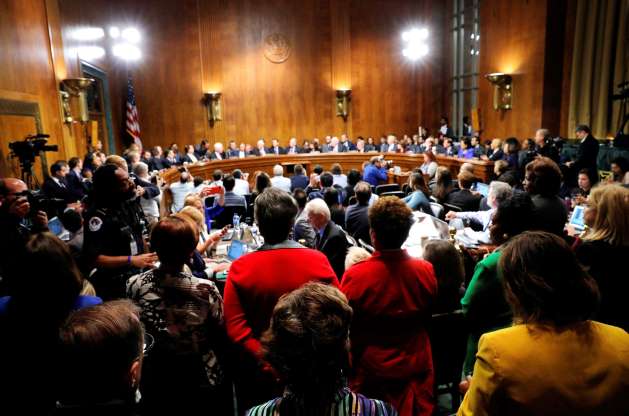 Female members of Congress stand in protest as members of the Senate Judiciary Committee meet to vote on the nomination of judge Brett Kavanaugh to be a US Supreme Court associate justice, on Sept. 28 on Capitol Hill in Washington. (Photo: AP)

TOPEKA, Kan. — President Donald Trump at a Kansas rally celebrated the confirmation of Brett Kavanaugh to the Supreme Court, condemning Democrats for what he called a "shameless campaign of political and personal destruction" against his nominee.

To cheers of supporters at the Kansas Expocentre in Topeka, Trump declared it an "historic night," not long after signing the paperwork to make Kavanaugh's status official.

"I stand before you today on the heels of a tremendous victory for our nation," he said to roars, thanking Republican senators for refusing to back down "in the face of the Democrats' shameless campaign of political and personal destruction."

Kavanaugh was sworn in as a justice Saturday evening in Washington after an extraordinarily fraught nomination that sparked angry protests, nail-biting votes and a national reckoning about sexual assault allegations and who should be believed. Kavanaugh staunchly denied the allegations, but nearly all Senate Democrats voted against his confirmation.

The final vote took place Saturday afternoon as the president was flying to Kansas aboard Air Force One, and he invited traveling reporters to his private office to watch the climactic roll call, which was interrupted several times by protesters in the Senate galleries before Capitol Police removed them.