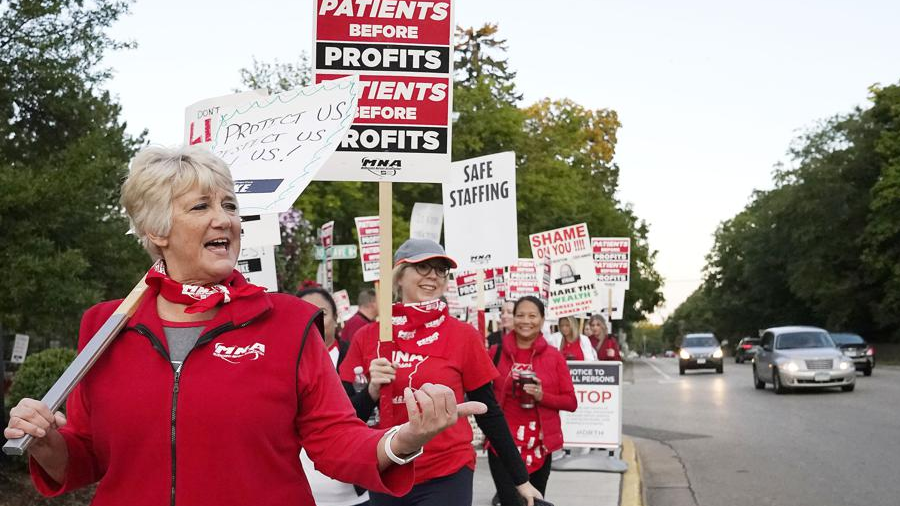 Some 15,000 nurses in Minnesota walked off the job on Monday to protest hospital understaffing that their union says has harmed patient care and exhausted health workers as they negotiate a new contract with hospital executives.

The strike, slated to last three days and described by the Minnesota Nurses Association as one of the largest in United States history, highlights nationwide health worker shortages that have been exacerbated by the COVID-19 pandemic.

The union says it has been negotiating a new agreement for more than five months, and that nurses have been working without a contract for weeks.

"Hospital executives have already driven nurses away from the bedside by their refusal to solve the crises of staffing and retention in our hospitals," the union's negotiating team said in a statement, adding that nurses were "understaffed and overworked."

The walkout was expected to affect at least 13 hospitals around Minneapolis and neighboring St. Paul. Twin Cities Hospital Group, which oversees four hospitals where nurses are striking, said it had asked the nurses' union to join them in mediation.

"A trained mediator can help parties focus on the key elements needed to move forward together. However, the nurses' union has rejected all our requests for mediation," the group said on its website.

Allina Health, which owns four hospitals with striking nurses, said on its website it was making every effort to minimize disruptions to patient care. It said it had been planning a strike for months.

The nurse strike has drawn support from U.S. lawmakers in Washington, including veteran Senator Bernie Sanders. "Nurses are the backbone of our healthcare system," Sanders wrote on Twitter, calling for fair scheduling and higher wages.

According to the U.S. Bureau of Labor Statistics (BLS), employment in healthcare across the United States is still below pre-pandemic levels.

Some 37,000 fewer people work in healthcare now than in February 2020, a September 2 report from BLS said.

The Minnesota nurses' strike comes amid an upsurge in union activity nationwide.

A national railroad strike could begin as early as Friday unless Congress steps in to block it. The two largest railroad unions have been demanding that the major freight carriers go beyond a proposed deal recommended by arbitrators appointed by U.S. President Joe Biden.

Some high-profile companies, including Starbucks, are among those trying to stifle ongoing unionization efforts. Since late last year, more than 230 U.S. Starbucks stores have voted to unionize, which Starbucks opposes.