Spain's government will confront all forms of violence, Prime Minister Pedro Sanchez said Friday following a third night of violent protests over the jailing of a rapper for controversial tweets. 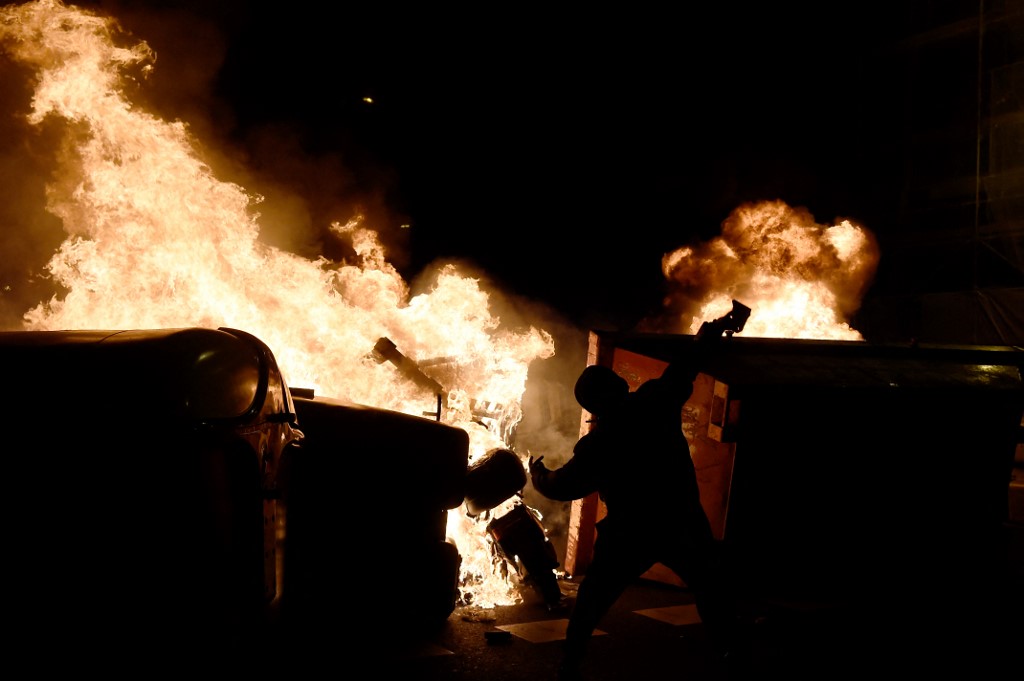 A protester throws a stone to Catalan regional police force Mossos d'Esquadra as dustbins burn in flames during a demonstration against the imprisonment of Spanish rapper Pablo Hasel in Barcelona on February 18, 2021. (Photo: AFP)

"Democracy never, ever justifies violence," the Socialist leader said in his first public condemnation of the unrest which began on Tuesday and has been applauded by his junior coalition partner, the hard-left Podemos.

Spain's conservative opposition had lambasted the premier for not publicly condemning the violence, calling on him to break with Podemos over its support for the demonstrators.

Angry demonstrations first erupted Tuesday night after police detained rapper Pablo Hasel, 32, who was holed up in a university in Catalonia to avoid going to jail in a case that has raised concerns about free speech in Spain.

"Violence is an attack on democracy. Consequently, the Spanish government will confront any kind of violence," Sanchez said.

"In a full democracy -- which Spain is -- the use of any kind of violence is unacceptable. There is no exception to this rule," he added, in reference to remarks by Podemos leader Pablo Iglesias who said Hasel's jailing raised questions about Spain's democracy.

About 100 people have been arrested since the protests began, including 16 overnight in Barcelona and the eastern city of Valencia, and scores have been injured, including a young woman who lost an eye after being hit by a foam round fired by police on Tuesday.

Many police officers have also been injured as protesters have hurled rocks and paving stones at them, while also torching barricades, rubbish bins and street furniture.

Although most of the protests started in Catalonia, where the rapper is from, they have spread to other cities including Madrid where another rally is to take place on Saturday.