Mexican fans plunged into anguish Wednesday by their team's drubbing by Sweden were left cheering for South Korea -- exploding into celebration when the Asian side defeated Germany, putting Mexico into the World Cup knockout stage.

Brimming with optimism after their team upset Germany in their World Cup opener and then beat South Korea, the fans back home in Mexico watched in horror as Sweden scored goal after goal in their final Group F match.

With the clock ticking down at Yekaterinburg Arena and the scoreboard at 3-0, it appeared Mexico were about to be sent unceremoniously home from Russia.

That is, unless winless South Korea somehow managed to avoid defeat by Germany and erase the possibility of a three-way tie for the group, which Mexico would have lost on goal difference.

Suddenly, all eyes turned to the South Korea-Germany match being played simultaneously in Kazan.

"Korea! Korea!" chanted fans in a Mexico City bar, leaping into the air and embracing when the Asian side scored a stoppage-time, VAR-assisted goal, and then a late second to seal the reigning champions' humiliating exit -- and allow Mexico to squeak through to the Round of 16.

"I went from crying to laughing," said Cecilia Gonzalez, a 22-year-old student who was celebrating the outcome of the rollercoaster ride with tequila.

"Thank you Korea. I don't even know quite where it is, but thank you, thank you."

Some fans even flocked to the South Korean embassy in Mexico City to celebrate, chanting that Koreans are "our brothers."

'Mexico let me down' 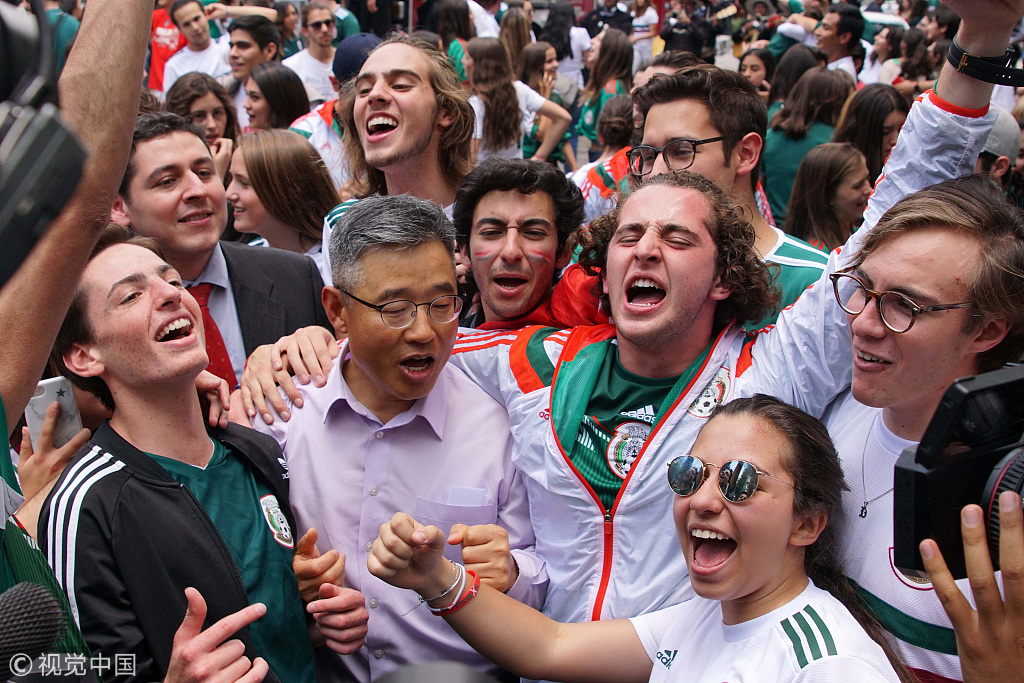 Fans of Mexico celebrate with Han Byung Jin, General Consul of the Republic of Korea, after Korea Republic's victory against Germany allowing Mexico's advance to the round of 16 in the 2018 FIFA World Cup Russia at South Korea embassy on June 27, 2018 in Mexico City, Mexico. (Photo: VCG)

Social media in Mexico instantly erupted into memes: a Mexican in cowboy hat and boots dancing to "Gangnam Style," a fake news headline on Mexico changing its official language to Korean, Twitter users vowing to start listening to K-pop and watch more Korean dramas on TV.

As for their own team, the fans' disappointment was palpable.

"Mexico really let me down. My expectations were so high. They played so well in the other matches, it got my hopes up. But they didn't play like I thought they would," said 20-year-old student Cecilia Jimenez.

With its three goals, Sweden finished atop the group and will play Group E runners-up Switzerland.

Mexicans were left praying for their good luck to continue.

"It's been going well for us so far. We beat the world champions, that's not so easy," said Luis Padilla, 29, a cafe owner in Mexico City, voicing cautious optimism that the team would continue bringing happiness to the fans back home.

"This is a country that grinds to a halt for football. Football changes everything. It sets our national spirits," he said.