WORLD 'We can’t lose our momentum:' US Louisiana vows to rebuild

'We can’t lose our momentum:' US Louisiana vows to rebuild

Back-to-back hurricanes in the space of six weeks left parts of Louisiana blanketed Sunday with tarpaulins, mangled metal and downed power lines — but not necessarily despair. 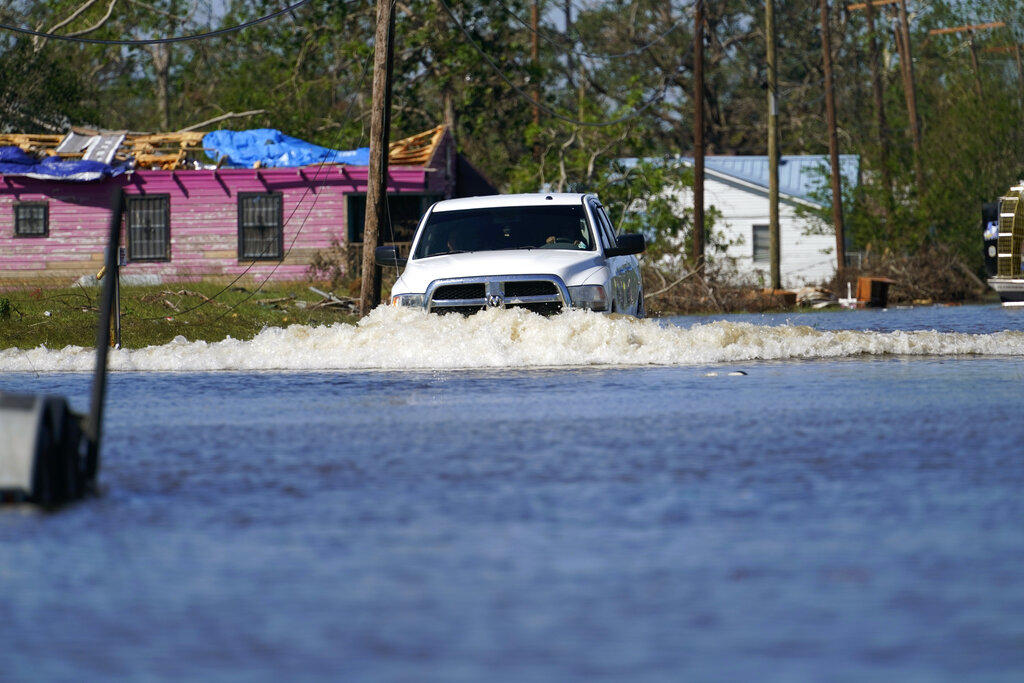 A truck drives through a flooded street in Lake Charles, La., Saturday, Oct. 10, 2020, past a home with damage from Hurricane Laura, after Hurricane Delta moved through on Friday. (Photo: AP)

Utility crews fanned out across the battered southwestern part of the state to restore electricity in the wake of Hurricane Delta, and residents began returning home along roads lined with debris and houses missing roofs. Some were grateful that the damage was not as bad as it could have been.

A 70-year-old woman in Iberia Parish died in a fire likely caused by a natural gas leak following damage from Hurricane Delta, the Louisiana Department of Health said Sunday.

Louisiana officials also blamed the death of an 86-year-old man on the hurricane. The St. Martin Parish resident died in a fire that erupted after he refueled a generator in a shed, Gov. John Bel Edwards said. He said it didn’t appear the generator had cooled down before the man refilled it.

A third storm-related death was reported in Florida, where a 19-year-old tourist from Illinois drowned after getting caught in a rip current caused by the storm off Destin, authorities said.

Roughly 350,000 customers in Louisiana remained without power two days after Delta blew ashore near the town of Creole with winds of 100 mph (155 kph), slamming a part of the state still recovering from Hurricane Laura's 150 mph (241 kph) onslaught on Aug. 27. Laura was blamed for 32 deaths, many of them caused in the storm's aftermath by carbon monoxide poisoning from generators.

The remnants of Delta, meanwhile, dumped heavy rain on parts of Georgia, the Carolinas and Virginia.

The storm was also blamed for washing out a railroad track and causing the derailment of a freight train in the Atlanta area that sparked a small fire and briefly forced some residents from their homes. Two crew members were taken to a hospital for observation and later released.

Clair Hebert Marceaux lost her home in Cameron Parish, Louisiana, during Hurricane Laura and said the community was hard at work on rebuilding when Delta struck.

“We can’t lose our momentum,” she said, though she added there was “utter devastation” in the area.

Marceaux, who was born and raised in Cameron Parish, is the director of the community’s busy port, which hosts fleets of shrimp and crab boats and serves as a key link in the region’s oil and gas industry.

Vessel traffic was halted until port authorities and the U.S. Army Corp of Engineers could take stock of the damage. Sunken boats, utility poles and other flotsam filled waterways.

“We are still in an assessment phase,” Marceaux said, “but we will be limping along as best as we can.”

Lynn Nguyen and her four children fled to Fort Walton, Florida, ahead of the storm and returned home to Abbeville, Louisiana, on a circuitous route to avoid flooded roads. Her home was spared major damage, though a fence was flattened.

“For the most part, I’m just glad I still have a job and a roof over my head,” said Nguyen, who works at a seafood market.

Earnestine and Milton Wesley had decided to ride out Delta in their Lake Charles home, damaged by Laura. As the wind rustled the roof tarp above them, they grabbed it through the hole in the ceiling and held on tight. Water poured in, flooding their den.

“We fought all night long trying to keep things intact,” Milton said. “And with God’s help we made it.”

After blowing ashore, Delta moved over Lake Charles, a city where Laura damaged nearly every home and building. More than 8,000 Louisiana residents who evacuated because of Laura were still in shelters as of Sunday, Edwards said. Roughly 850 people were in shelters because of Delta.

Delta, the 25th named storm of an unprecedented Atlantic hurricane season, was the 10th to hit the mainland U.S. this year, breaking a record set in 1916, Colorado State University researcher Phil Klotzbach said.

The floodwaters surged up the Wesley family’s front yard, and they were terrified it would pour inside, but it stopped short of the door. It carried with it bags of trash and muck, swept up from their neighbors’ piles of debris from the prior storm.

“The water was something else last night,” Milton said. “We’ve never seen it flood so bad out here, to the point I could have swam out here last night, that’s just how deep it was.”