WORLD ‘Why not now?’ for slavery reparations, House panel is told

‘Why not now?’ for slavery reparations, House panel is told 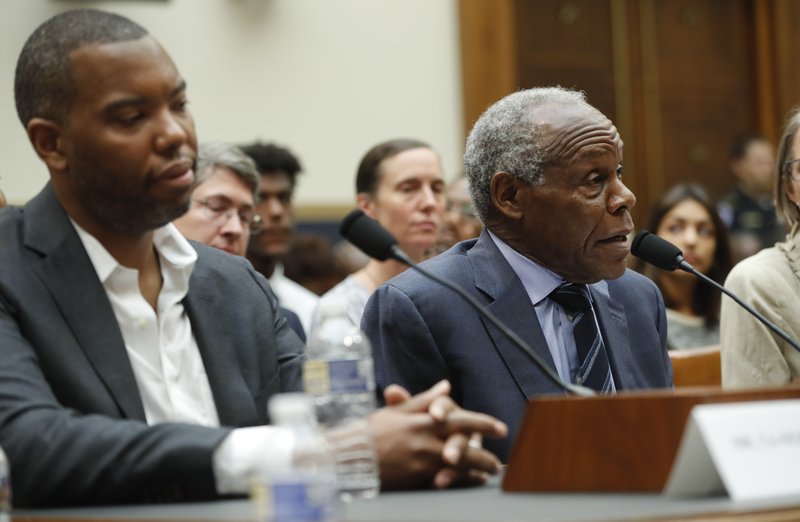 Actor Danny Glover, right, and author Ta-Nehisi Coates, left, testify about reparation for the descendants of slaves during a hearing before the House Judiciary Subcommittee on the Constitution, Civil Rights and Civil Liberties, at the Capitol in Washington, Wednesday, June 19, 2019. (Photo: AP)

Lawmakers on Wednesday held the first congressional hearing in more than a decade on reparations, spotlighting the debate over whether the United States should consider compensation for the descendants of slaves in the United States.

Coates, who drew new attention to the issue with his essay “The Case for Reparations,” published in The Atlantic magazine in 2014, told the panel “it’s impossible to imagine America without the inheritance of slavery.”

“The matter of reparations is one of making amends and direct redress but is also a question of citizenship,” Coates said.

But another writer Coleman Hughes, who at times testified over boos from the audience, said black people don’t need “another apology,” but safer neighborhoods, better schools, a less punitive criminal justice system and better health care.

“None of these things can be achieved through reparations for slavery,” said Hughes, who added that he is the descendant of blacks enslaved at Thomas Jefferson’s Monticello.

The hearing comes amid a growing discussion in the Democratic Party about reparations. Several of the party’s presidential candidates have endorsed looking at the idea, though they have stopped short of endorsing direct payouts for African Americans.

Rep. Sheila Jackson Lee of Texas, who became the sponsor of a measure to study reparations after the retirement of Rep. John Conyers, said black Americans “are the only group that can singularly claim to have been slaves under the auspices of the United States government.” She said Wednesday’s hearing “is not a symbolic action,” but about legitimate legislation that should be signed into law.

“I just simply ask: Why not and why not now?” she said to a packed hearing room.

Visitors lined up to attend. Abibat Rahman-Davies, 20, from Southern California, said she was waiting more than two hours.

“I think that this has been a part of history that we’ve ignored for too long so it’s very important for me to be here and to see this part recognized,” she said.

While reparations has been moving toward the mainstream of the Democratic Party, the idea remains far from widely accepted, both among Democrats and the public at large.

Booker, who testified first, said the US has “yet to truly acknowledge and grapple with the racism and white supremacy that tainted this country’s founding and continues to cause persistent and deep racial disparities and inequality.”

“The stain of slavery was not just inked in bloodshed . but in policies that have disadvantaged African Americans for generations,” he said.

Rep. Mike Johnson of Louisiana, the top Republican on the panel, said he respects the beliefs of those who support reparations. He called America’s history with slavery “regrettable and shameful.”

But he said paying monetary reparations for the “sins of a small subset of Americans from many generations ago” would be unfair, difficult to carry out in practice and, in his view, likely unconstitutional.

House Majority Leader Steny Hoyer on Wednesday called reparations a “serious issue” and said he expects the resolution will see a vote in the House, but it appears to have no chance of advancing in the Senate.

Senate Majority Leader Mitch McConnell said Tuesday that he opposes reparations, telling reporters: “I don’t want reparations for something that happened 150 years ago. . We’ve tried to deal with the original sin of slavery by passing civil rights legislation” and electing an African American president, Barack Obama.

“It would be hard to figure out who to compensate” for slavery, the Kentucky Republican said, and added: “No one currently alive was responsible for that.”

Top Democrats pushed back Wednesday on McConnell’s comments, with one calling his remarks “sad.”

Rep. Kathleen Clark, D-Mass., a member of the leadership team, said the country’s history of slavery is a “stigma and a stain” that continues to be felt today. That McConnell wants to “write that off,” she said, is ignoring the impact and legacy of the country’s history.

“We cannot look to him for any sort of moral authority or guidance on how we should be addressing the issues of slavery and the impact today on income inequality, curtailing opportunity and civil rights and voting rights,” she said.

House Democrats discussed reparations behind closed doors ahead of the hearing and the caucus chairman, Rep. Hakeem Jeffries, D-N.Y., said setting up the commission to study what he called “one of the worst crimes against humanity” is completely reasonable.

Republicans invited two witnesses to Wednesday’s hearing. One is Hughes, the young columnist who has rejected reparations and affirmative action. The other is Burgess Owens, a former Oakland Raiders football player and Super Bowl champion, who recently wrote a Wall Street Journal editorial eschewing reparations. “Proponents of reparations act as though black Americans are incapable of carrying their own burdens, while white Americans must bear the sins of those who came before,” he wrote.

The debate over reparations for black Americans began not long after the end of the Civil War, and was long defined as financial compensation for ex-slaves and their descendants. Opponents of reparations often frame the issue as an unfair solution that places the blame or burden of the legacy of slavery on white Americans who were not alive at the time and were therefore not responsible.

Supporters point to racial disparities across Americans society as proof that while whites living today were not responsible for what came before, they have nonetheless benefited, just as black Americans have experienced the lingering effects of the slave system.

A resolution to study reparations was first proposed in 1989 by Conyers of Michigan, who put it forward year after year.

The hearing Wednesday coincides with Juneteenth, a cultural holiday commemorating the emancipation of enslaved black people in the United States.