ANCHORAGE, the United States, March 19 (Xinhua) -- The claim that there is genocide in China's Xinjiang is the biggest lie of the century, said the Chinese delegation on Friday following the end of the China-U.S. high-level strategic dialogue in Anchorage, the U.S. state of Alaska. 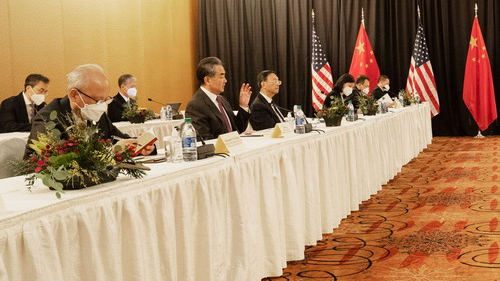 The Chinese side is ready to engage in exchanges with the U.S. side on the basis of mutual respect, and the door of Xinjiang is wide open to the world, said the delegation.
However, China will not accept any investigation in Xinjiang based on the presumption of guilt by those who are biased and condescending, and who want to lecture China, it said.
It is hoped that the U.S. side can respect facts, call off attacks against and smearing of China's Xinjiang policy, and abandon double standards on anti-terrorism, it added.
The two-day dialogue marked the first high-level contact between the two countries after their heads of state had a phone call on the eve of the Chinese lunar new year, and the first face-to-face talks between high-level officials of the two sides since U.S. President Joe Biden took office in January.