French police arrested 254 people during clashes in Paris and other cities on the first anniversary of the "yellow vest" movement, Interior Minister Christophe Castaner said Sunday. 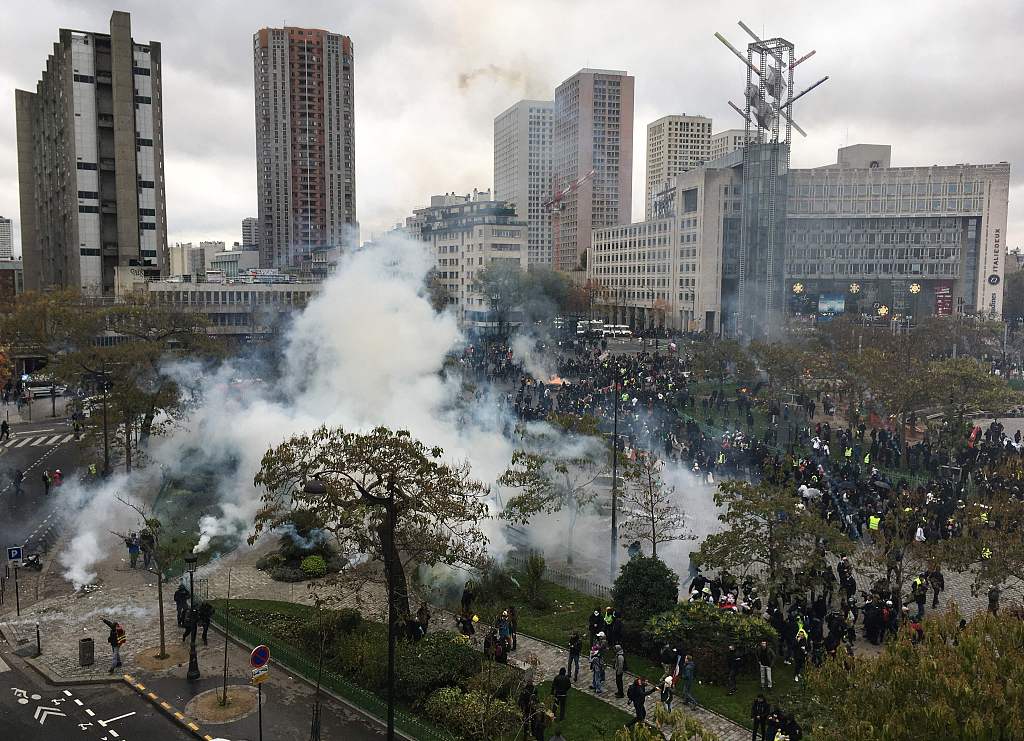 A general view shows protesters clashing with police forces on the place d'Italie in Paris on November 16, 2019. (Photo: VCG)

The violence in Paris, where police battled rioters for hours around the southeastern Place d'Italie square, was the worst in the French capital in months.

A total of 173 people were arrested in the city, Castaner told Europe 1 radio, revising upwards Saturday's count of 147.

Dozens more were arrested in smaller protests in cities including Nantes, Montpellier, Strasbourg, Bordeaux and Toulouse.

Castaner claimed that there were "few demonstrators" among at the protesters Saturday in Paris, who he said were mainly "thugs, brutes who came to fight the security forces and prevent the emergency services from doing their work."

Several cars were overturned or set alight, bus shelters were smashed and a monument to a World War II hero - Marshal Alphonse Juin -- was defaced.

The windows of a major shopping centre and a neighbouring hotel were also attacked by groups of stone-throwing demonstrators dressed in black, who wore masks to hide their faces.

The police, who had initially authorised the demonstration but declared it illegal after it turned violent, used tear gas and water cannon to try quell the unrest.

In rural France, the anniversary passed off generally peacefully, with thousands of yellow vests occupying the traffic roundabouts where the movement began last year over rising fuel taxes.

The interior ministry put the number of demonstrators at 28,600 nationwide but the organisers said nearly 40,000 people had rallied -- a far cry from the estimated 282,000 who took part in the first big day of protests on November 17, 2018.

The leaderless yellow vests, who accuse President Emmanuel Macron of ruling on behalf of the urban elite, are adamant that they have not gone away.

They are now looking to join forces with the trade union movement, which is planning a major transport strike over pension reforms starting on December 5.