WORLD 1 in 6 children lived in extreme poverty prior to COVID-19: analysis

1 in 6 children lived in extreme poverty prior to COVID-19: analysis 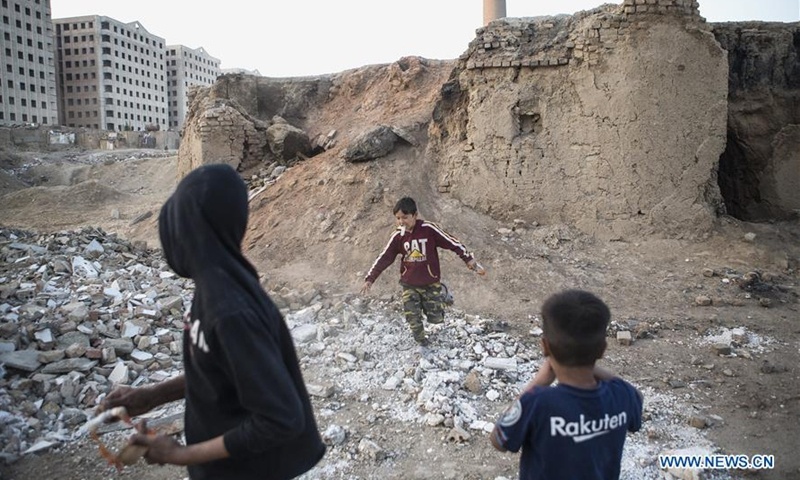 Children play in a slum on the outskirts of Tehran, Iran, on Oct. 17, 2020, the International Day for the Eradication of Poverty. (Photo: Xinhua)

One in six children, or 356 million globally, lived in extreme poverty before the COVID-19 pandemic, and the situation is set to worsen significantly, according to a new analysis by the World Bank and the UN Children's Fund (UNICEF).

Sub-Saharan Africa accounts for two-thirds of children living in households that struggle to survive on an average of 1.90 US dollars a day or less per person -- the international measure for extreme poverty. South Asia accounts for 18 percent of these children, according to the analysis released on Tuesday.

The number of children living in extreme poverty dropped moderately by 29 million between 2013 and 2017. However, UNICEF and the World Bank warned that any progress made in recent years is concerningly slow-paced, unequally distributed, and at risk due to the economic impact of the COVID-19 pandemic.

Although children make up around a third of the global population, around half of the extreme poor are children, according to the analysis.

Children (people younger than 18 years) are more than twice as likely to be extremely poor as adults (17.5 percent of children vs. 7.9 percent of adults in 2017). The youngest children are the worst off -- nearly 20 percent of all children below the age of five in the developing world live in extremely poor households, according to estimates based on the Global Monitoring Database of household surveys from 149 countries compiled in spring 2020.

Because the estimates pertain to 2017, they do not consider the adverse economic impact of the COVID-19 pandemic.

The analysis also notes that more than 70 percent of children in extreme poverty live in a household where the head of the house works in agriculture.

The ongoing COVID-19 crisis will continue to disproportionately impact children, women and girls, threatening to reverse hard-won gains toward gender equality, said the World Bank and UNICEF in a joint press release.

Social protection measures have a crucial role to play to mitigate coping mechanisms by the poor and vulnerable in both the immediate COVID-19 response as well as the longer-term recovery, said the press release.

World Bank and UNICEF data suggest that most countries have responded to the crisis by expanding social protection programs, particularly cash transfers. However, many of the responses are short-term and not adequate to respond to the size and expected long-term nature of the recovery.

It is more important than ever for governments to scale up and adjust their social protection systems and programs to prepare for future shocks. This includes innovation for financial sustainability, strengthening legal and institutional frameworks, protecting human capital, expanding child and family benefits for the long term as well as investing in family-friendly policies, such as paid parental leave and quality child care for all, said the press release.