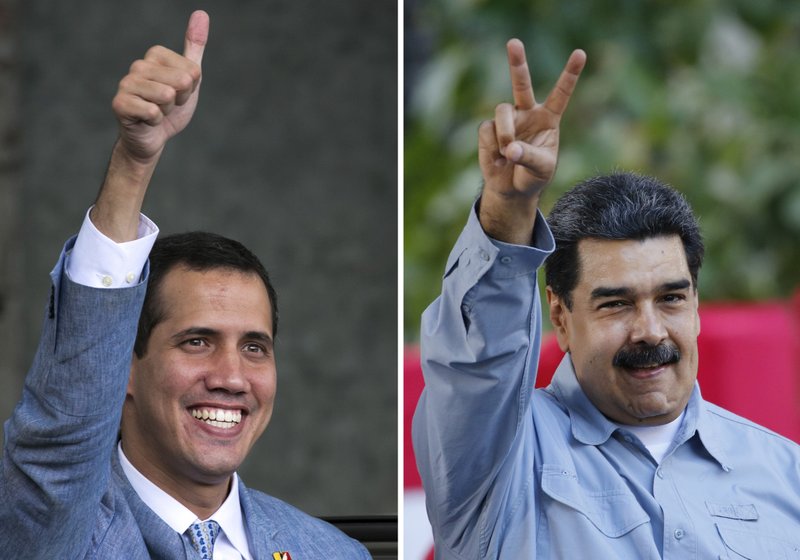 Heightened tensions in Venezuela left a woman dead and a dozen injured near the border with Brazil on Friday, in the first deadly clash over the opposition’s attempts to bring in emergency food and medicine that President Nicolas Maduro says isn’t needed and has vowed to block.

Emilio Gonzalez, mayor of the Venezuela border town of Gran Sabana, identified the shooting victim as Zoraida Rodriguez, who was a part of an indigenous group that clashed with the Venezuela National Guard and army a day after Maduro ordered the border with Brazil closed.

There was no immediate information on the condition of the injured, though television news showed images of three men on gurneys being treated for bloody wounds. Gonzalez said soldiers fired rubber bullets and tear gas.

The violence came just hours before dueling concerts were to begin on the country’s western border with Colombia, where much of the US-supplied aid is being stored in a warehouse.

British billionaire and adventurer Richard Branson is sponsoring a Live Aid-style concert featuring dozens of musicians including Latin rock star Juanes on one side of a crossing that Colombian officials have renamed the “Unity Bridge,” while Maduro’s socialist government is promising a three-day festival deemed “Hands Off Venezuela” on the other.

“If we can take people to space why is it so hard to take people out of poverty?” Branson said, opening the concert before a cheering crowd. “We must break the impasse and end the humanitarian crisis.”

Maduro denies any humanitarian crisis exists, and the plan to bring in aid is one of the most ambitious — and potentially dangerous — that the opposition has attempted since opposition leader Juan Guaido declared himself interim president in January.

To reach the concert, dozens of people in the town of Palotal hiked through an unmarked trail between high bushes to sneak into the border with Colombia. Carrying ice boxes, snacks and water, they whispered directions and took turns to look out for soldiers closely watching the porous borders. The risk seemed high, but worth it.

“We’re going to the Guaido concert because we need the humanitarian aid,” 19-year-old Shirley Duran said about the Venezuelan opposition leader, who has the support of the United States and 50 other countries.

“This concert happens once in a lifetime,” she said. “It will be a great opportunity for so many poor people who are suffering under the heat, who are hungry, jobless. At last they’ll have something to enjoy.”

The concert began with Reymar Perdomo, a Venezuelan migrant who made rose to notoriety for a video went viral showing her singing. On stage, she sang her signature song, “Me Fui,” Spanish for “I left,” which has become the unofficial anthem of Venezuelans who have fled their country’s economic implosion.

Perdomo, said performing so close to the border brought back difficult memories.

“A little over a year ago I crossed this border and was robbed of my luggage and all my money,” she said. “But I know in this moment that there will be change because Venezuelans want it and they are showing it today.”

Meanwhile, across the border in Venezuela, government workers were assembling a smaller stage for Maduro’s concert. No performers were in sight.

As Venezuela’s political turmoil drags on, Guaido’s allies are hoping the massive concert and push for aid will mark a turning point in their quest for a transitional government. But Maduro has shown no signs of backing down, and analysts warn that whatever happens over the next two days may not yield a conclusive victory for either side.

“I think one of the government’s aims is to confuse the whole thing, possibly to create some kind of chaos that makes the opposition look bad,” Phil Gunson, a senior analyst with the Crisis Group based in Caracas, said of Maduro’s rival concert. “It’s a propaganda war.”

The plan to bring in aid is one of the most ambitious — and potentially dangerous — that the opposition has attempted to undertake since Guaido declared himself interim president in January.

The standoff also prompted Branson to back the concert, who Colombian entrepreneur Bruno Ocampo said is so committed to getting humanitarian aid into Venezuela that he will stay until Saturday to help ensure that food and medical supplies make it across the border.

Much like the original 1985 Live Aid concert, which raised funds to relieve the Ethiopian famine, Branson has set a goal to raise $100 million within 60 days.

“Throughout history, art has had a big role in fostering change,” said Miguel Mendoza, a Venezuelan musician who will be performing Friday and won a Latin Grammy in 2010 as part of the pop duo Chino & Nacho. “Music, above all, has a magnificent power.”

Six hundred tons of aid, largely donated by the US, has been sitting in a storage facility at what is widely known as the Tienditas International Bridge for two weeks, and more aid continued to arrive on Friday, according to the US Agency for International Development.

Even as several million Venezuelans flee and those who remain struggle to find basic goods like food and antibiotics, Maduro contends the aid is a ploy by the Trump administration to overthrow his government. The military has placed a large tanker and two containers in the middle of the bridge to block it.

Days after Branson launched his concert, Maduro’s government announced that not only would they hold a rival festival but that they would also deliver over 20,000 boxes of food for poor Colombians in Cucuta on Friday and Saturday.

The sharp rhetoric from both sides has put many in this border city of 700,000 on edge.

Paola Quintero, an activist for Venezuelan migrants, said that while the concert has had a positive, short-term impact on Cucuta’s economy, many are worried about what might happen Saturday when thousands try to move aid across the border.

“What awaits those who will be on the bridge, trying to get aid through?” she said.

Venezuelans like Rosa Mora, 40, said they were still debating whether to heed the opposition’s call for a mass mobilization at three bridges in the Cucuta area Saturday, fearful that they might be met with resistance by the military.

“I’m terrified of what’s going to happen,” she confided.

Still, when she thinks about her children and a sister with diabetes that has gone untreated for the last year, she leans toward participating.