1 killed, 3 injured during protests over controversial citizenship law in India 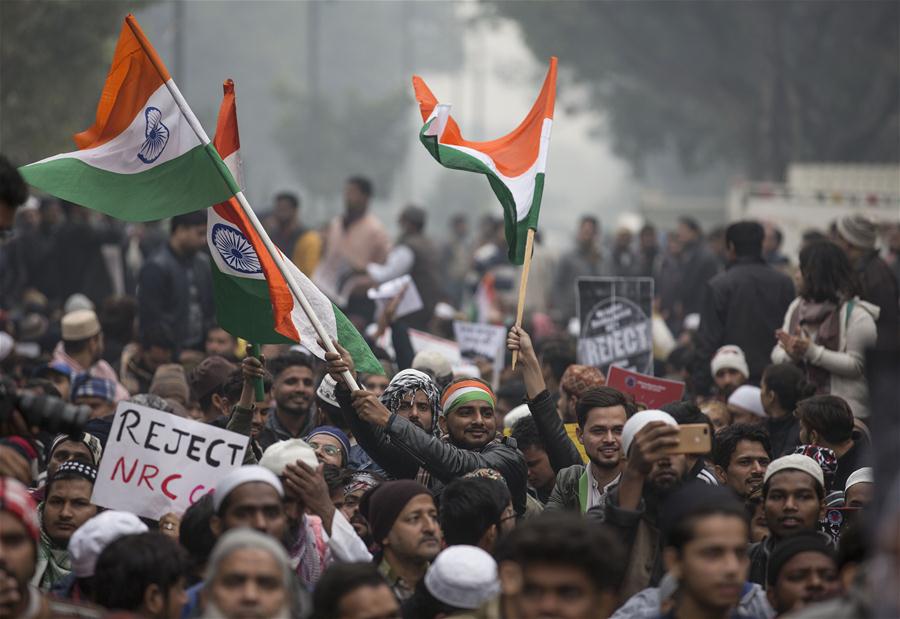 NEW DELHI, Dec. 19 (Xinhua) -- At least one person was killed and three others injured Thursday during violent clashes between protesters and police over controversial new citizenship law in the northern Indian state of Uttar Pradesh, officials said.

The killing took place in the old part of Lucknow city, the capital city of Uttar Pradesh.

"One person was killed due to firearm injury and three others have been hospitalised here," a health official at a medical trauma centre in Lucknow said.

Police officials are yet to make a statement over the casualties.

Massive violent protests rocked the state especially capital city during the day over the citizenship law. The police fired tear smoke shells and resorted to baton charging to the stone-throwing crowd.

Authorities early Thursday announced the imposition of prohibitory orders in a bid to stop protests in the state.

The Uttar Pradesh Police Chief O P Singh asked people to not come out on roads in wake of the prohibitory orders.

However, people defied the orders and took to streets against the law demanding its revocation. The protesters turned violent and resorted to arson by setting several vehicles and police posts on fire.

Reports said about 20 people were taken into custody in the city.

Violent protests and clashes also broke out during the day in Sambhal and Unnao district. A state transport bus was set ablaze during the protest in Sambhal. Authorities have suspended mobile internet services indefinitely in the district.

In Hasanganj of Unnao district, several vehicles were set on fire during the protests. Reports said the protesters vandalised a police post and even tried to set it on fire.

Taking a strong note of the violence, Uttar Pradesh Chief Minister Yogi Adityanath warned his government will deal with those who involved in damaging public assets strictly by "auctioning" their properties to compensate for the loss.

"There was violence in Lucknow and Sambhal and we will deal with it strictly. All properties of those involved in damaging public assets will be seized and auctioned to compensate for the losses. They have been captured in video and CCTV footage. We will take 'badla' (revenge) on them," Adityanath said.

In India's national capital authorities for the first time suspended mobile internet, voice calls and text messaging in some parts in wake of the massive protests.

Police have detained dozens of protesters from the Red Fort area, the Thursday's venue of the protest in Delhi against new citizenship law. The policemen barricaded roads and closed down over 20 metro stations to stop the protest demonstration.

Protests erupted across India and inside universities against the new citizenship law passed by Indian parliament last week.

With this new law, the government would grant Indian citizenship to those non-Muslim immigrants who had entered the country illegally until Dec. 31, 2014. People in the northeastern states fear granting of citizenship to immigrants would endanger their status. Four people were killed in police firing in Assam.

Sixty petitions have been filed in India's top court to challenge the new law.