10 arrested in clashes outside Spain's Camp Nou stadium during Clasico 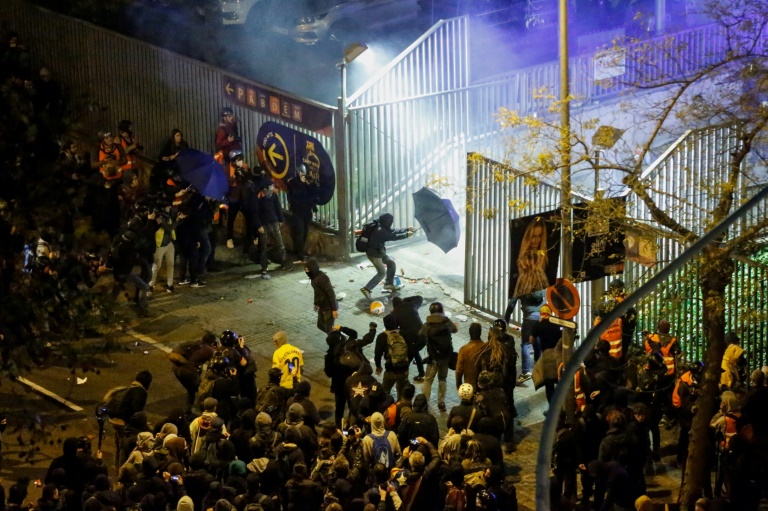 10 people were arrested during independence protests at the Clasico in Barcelona.  (Photo: AFP)

10 people were arrested and over 60 injured in clashes between Catalan separatists and police outside of Barcelona's Camp Nou stadium on Wednesday night as Barcelona and Real Madrid faced off, local authorities said Thursday.

Masked protesters set bins on fire and threw rocks and glass bottles at police who responded with foam bullets and baton charges in a street near the stadium during the first "Clasico" match of the season between the two arch-rivals.

Police detained 10 people during the clashes for affront to authority and causing public disorder, said a spokesman for Catalonia's regional police force, the Mossos d’Esquadra.

But the police spokesman said a total of 56 officers were injured, including two with broken bones.

Some 3,000 police officers and private security agents had been deployed for the game amid calls for Catalan separatists to protest outside the stadium during the fixture.

The clashes outside the Camp Nou were the first violent incidents in Catalonia since October when Spain's Supreme Court jailed nine Catalan separatist leaders over their role in a failed 2017 bid for independence, triggering days of protests that sometimes ended in clashes with police.

The original fixture in October had to be postponed due to the violent demonstrations across the wealthy northeastern region.

Inside the stadium, the match passed largely undisturbed, save for a brief pause early in the second half as dozens of yellow beach balls were thrown onto the field and had to be removed by stewards.

Thousands of fans also held up blue banners with the words 'Spain, sit and talk' which were given to supporters outside the grounds by Democratic Tsunami, the Catalan independence group that called the demonstration.

Four hours before kick-off, thousands had gathered at the four corners of the stadium to hold the same blue banners and wave Catalan flags, while some blocked traffic too. The match ended in a 0-0 draw.