100 days ahead of vote, faltering Trump banks on 'silent majority'

US President Donald Trump mounted a strident defense Sunday of his wavering reelection bid with 100 days to go in a campaign that has seen him underwater in the polls -- and banking on the "silent majority" he vowed will bring him victory. 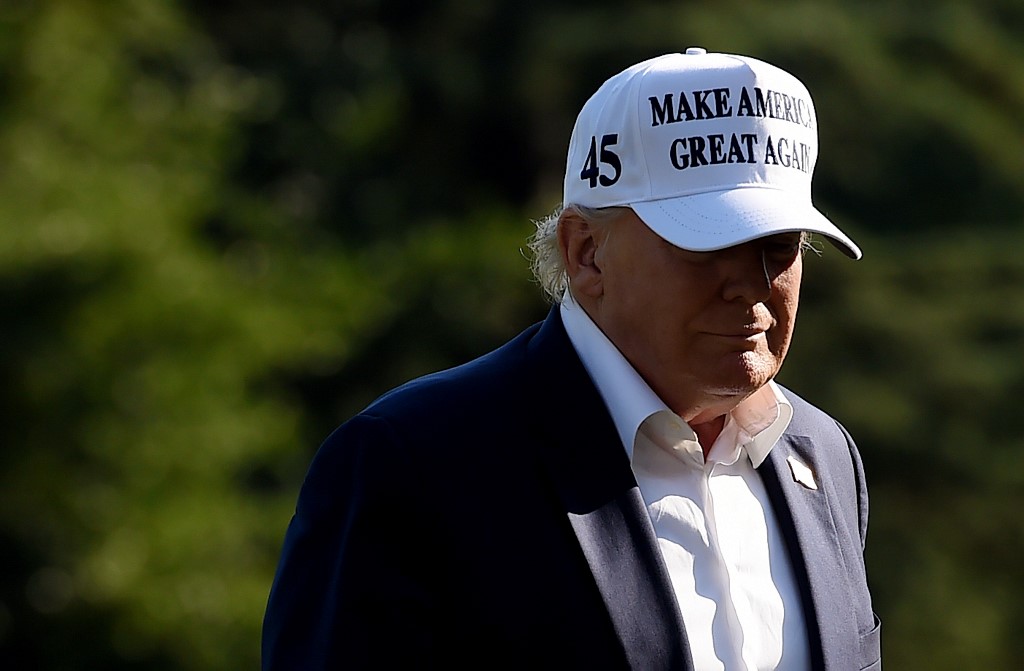 US President Donald Trump walks off Marine One at the White House in Washington, DC, July 26, 2020 after spending the weekend at Bedminster, New Jersey. (Photo: AFP)

The 74-year-old Republican has struggled on numerous fronts, facing mounting criticism over his handling of the coronavirus outbreak and the resulting economic pain, and failing to land punches on his opponent, Joe Biden.

In the latest blow to his hopes of returning to the White House after November 3, polls released Sunday showed his support cratering in three critical battleground states.

"The Trump Campaign has more ENTHUSIASM, according to many, than any campaign in the history of our great Country -- Even more than 2016," Trump thundered on Twitter.

"Biden has NONE! The Silent Majority will speak on NOVEMBER THIRD!!! Fake Suppression Polls & Fake News will not save the Radical Left."

Trump's 77-year-old Democratic rival Biden, who says he is fighting for "the soul of America," implored voters to make Trump a one-term president.

"In 100 days, we have the chance to set our nation on a new path. One where we finally live up to our highest ideals and everyone has a fair shot at success," he tweeted.

With the coronavirus killing more than 1,000 Americans a day, the president -- who is at his best soaking up the adulation of supporters at live events -- has been forced to cancel his rallies and ditch the Republican convention in Florida next month.

The pandemic, which has infected 4.2 million Americans and killed almost 150,000, is ravaging the US economy and -- with the outbreak largely under control in Europe and Asia -- has highlighted the shortcomings of the US response.

The president has also lost support over his handling of historic uprisings against racism and police brutality, angering local communities with incendiary rhetoric and a pledge to "surge" federal agents into numerous major US cities.

That all is not well in Team Trump's misfiring reelection bid was perhaps most evident in the president's recent demotion of bravado campaign manager Brad Parscale.

With overall approval ratings permanently stuck in the low 40 percent range, he is the first president to seek reelection after impeachment.

Trump is offering a vision of chaos under his opponent, in which Biden's desire to "abolish the American Way of Life" would turn US cities into crime-infested wastelands.

But he has largely failed to expand his fervently loyal base with a pitch that boils down to claiming Biden will have Americans "cowering to radical left-wing mobs."

On Sunday, Trump also tweeted his oft-repeated complaint that mail-in voting will corrupt the election "& everyone knows it," despite there being no evidence of fraud during such voting in previous elections, nor that it would be a factor in November.

In Florida, the president garnered 46 percent support against 51 percent for Biden -- while in Arizona, the challenger was four points ahead, with 49 percent.

In Michigan, Biden's lead stands at 52 percent to 40 percent -- a larger lead than the RealClearPolitics average of recent national polls, which puts the former vice president ahead by 8.7 points.

Trump carried all three states in 2016, although he won Michigan by fewer than 11,000 votes.

Meanwhile, Biden is running an unprecedented campaign from his Delaware home, with no rallies, few news conferences and the space to sit back and watch Trump lurch ever deeper into trouble.

But the president is keen to remind those who discount him that, despite grim polling in 2016, he comfortably beat all comers for the nomination before defeating Democratic rival Hillary Clinton.

Maryland's Republican governor Larry Hogan, who didn't vote for Trump in 2016 and is seen as a potential candidate in 2024, told CNN on Sunday he was unlikely to endorse the president this time around.

"The election is 100 days away. I think early voting starts in 60 days or less. We're getting very close for the American people to make that decision," he said.

"I think, quite frankly, a lot of people like me are frustrated with the divisiveness and dysfunction on both sides and don't feel like we have two great choices."