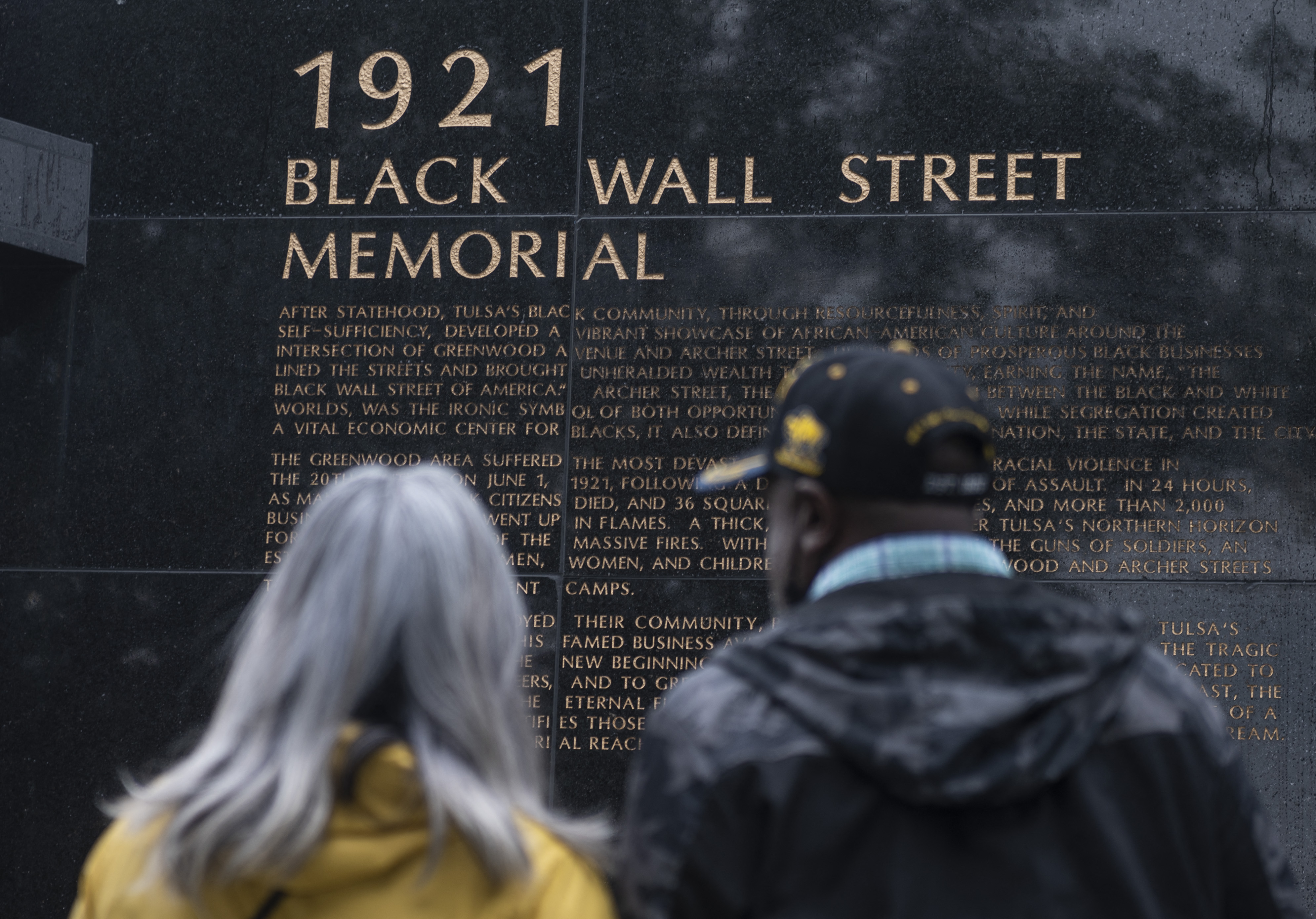 People look at the 1921 Black Wall Street Memorial on the 100 year anniversary of the Greenwood massacre in Tulsa, Oklahoma, on May 31, 2021. (Photo: AFP)

In Tulsa, the city that still bears the scars of a 1921 racial massacre, African-American residents are eagerly awaiting the arrival of President Joe Biden on Tuesday, hoping he will hear their call for financial reparations.

"I just want him to feel our pain," said local activist Kristi Williams.

The Democratic leader, who has benefited from a strong support base among Black voters, is scheduled to attend Tuesday's commemorations of the 100th anniversary of the Tulsa race massacre, one of the worst episodes of racial violence in U.S. history.

Williams, who is descended from some of the massacre victims, wants Biden to "do us right."

"It's been 100 years, and we have been impacted negatively, from housing, economic development, our land has been taken," said she, adding that "this country, right now has an opportunity to right this wrong."

Tulsa has also begun to excavate mass graves, where many Black victims of the massacre are buried, in an effort to shed more light on the city's dark past.

The tragedy 100 years ago

On May 31, 1921, a group of Black men had gone to the Tulsa courthouse to defend a young African-American man accused of assaulting a white woman. They found themselves facing a mob of hundreds of furious white people.

Tensions spiked and shots were fired, and the African Americans retreated to their neighborhood, Greenwood.

The next day, at dawn, white men looted and burned the neighborhood, at the time so prosperous it was called Black Wall Street.

As with the economic losses, the human toll is difficult to estimate, but historians say that as many as 300 African-American residents lost their lives, and nearly 10,000 people were left homeless. 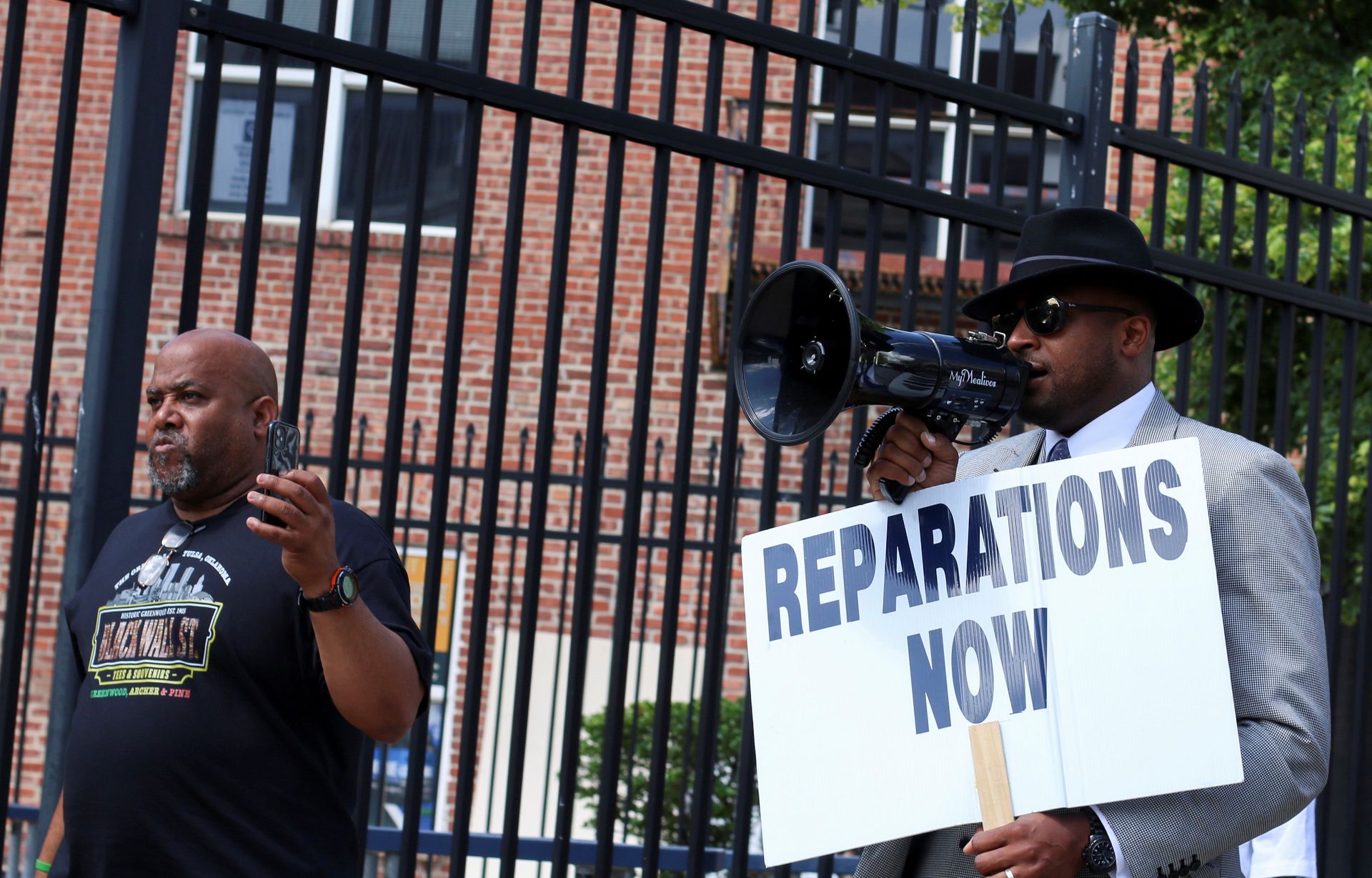 Man holds card with "Reparations now" during a march ahead of the 100 year anniversary of the 1921 Tulsa Massacre in Tulsa, Oklahoma, May 26, 2021. (Photo: Reuters)

Biden said Monday that "the federal government must reckon with and acknowledge the role that it has played in stripping wealth and opportunity from Black communities" such as Greenwood.

In Tulsa, this is just the beginning: residents expect further action from a president who has cautiously declared support for looking into financial reparations for Blacks.

"There's nothing here but grass, but there was investment, there was wealth, there was life," said Representative Sheila Jackson Lee, a Texas Democrat. She is the chief sponsor of a bill on federal slavery reparation payments to African Americans.

In mid-April, a U.S. congressional committee voted to advance the bill to the House of Representatives.

On April 19, some of the last 100-year-old survivors of the Tulsa Race Massacre came to Washington to testify before Congress and ask that the country recognize their suffering.