A suicide attacker blew himself up near a crowd of police and protesters in Kabul Thursday, killing at least 11 people and wounding 25 others, officials said, in the latest deadly violence to rock the Afghan capital.

The attack happened during a protest against the death of a shopkeeper in a police operation targeting alcohol bootleggers, an unnamed official said.

"A suicide attacker has detonated himself... close to a number of police who were trying to provide security for an ongoing protest," deputy interior ministry spokesman Nasrat Rahimi said.

A suicide attacker blew himself up near a crowd of police and protesters in Kabul Thursday, killing at least 11 people and wounding 25 others, officials said, in the latest deadly violence to bring carnage to the Afghan capital. /Reuters Photo

Health ministry spokesman Wahid Majroh said that 11 bodies had been taken to hospitals around the city along with 25 wounded, adding that the toll could rise.

The ISIL group claimed responsibility for the attack via its Amaq propaganda agency, according to the SITE intelligence group, which monitors jihadist networks.

Kabul police spokesman Basir Mujahid said the suicide bomber had targeted police officers, five of whom were killed and another 11 wounded.

"He detonated his vest very close to police who were trying to stop the protesters," Mujahid added.

A security source who spoke to AFP on the condition of anonymity said 20 people had been killed and 20 wounded in the attack, but that higher toll could not be immediately confirmed.

Footage shown on Afghanistan's Tolo News showed men, purportedly shopkeepers, gathered on a street during the day, angrily denying they were bootleggers.

Afghans are prohibited from selling or consuming alcohol in the Muslim-majority country.

President Ashraf Ghani condemned the "barbaric attack" and ordered an investigation, according to a statement from the presidential palace.

The deadly assault comes a week after more than 40 people were killed and dozens more wounded in a suicide blast claimed by the ISIL group that targeted Shiites in Kabul.

That was the third deadly attack claimed by the group in the Afghan capital in December alone.

The ISIL group has gained ground in Afghanistan since it first appeared in the region in 2015 and has scaled up its attacks in Kabul, including on security installations and the country's Shiite minority.

Kabul has become one of the deadliest places in war-torn Afghanistan for civilians in recent months, as the Taliban step up their attacks and ISIL seeks to expand its presence in the country. 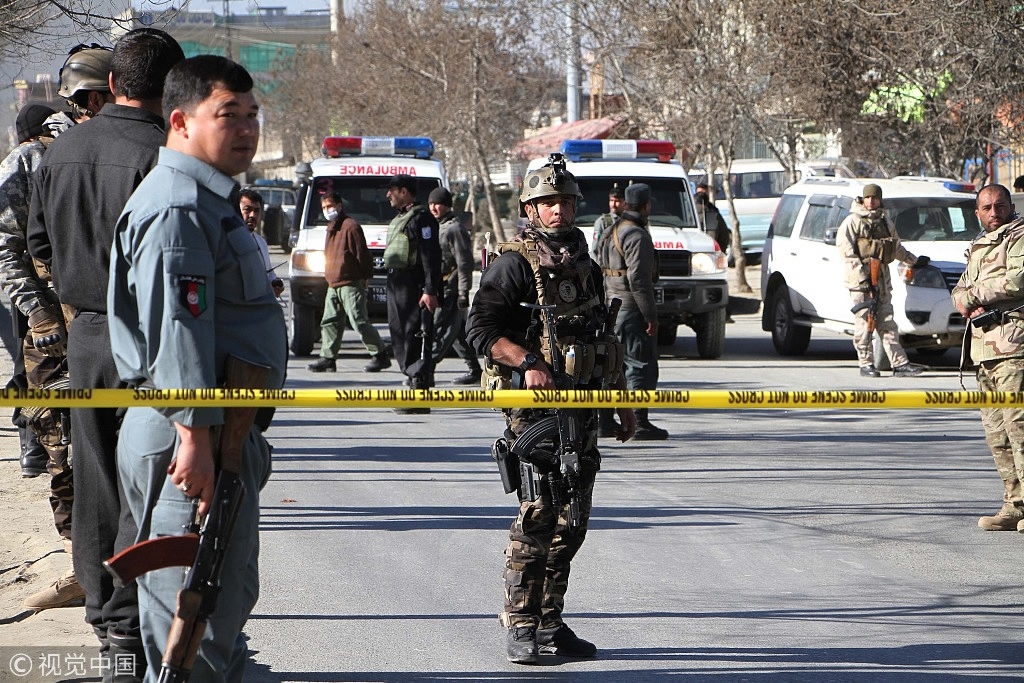 Afghan security officials inspect the site after triple blast in Kabul, Afghanistan on December 28, 2017. At least 40 people had been killed and 30 wounded in the blast. /VCG Photo

A suicide bomber killed six civilians in a Christmas Day attack near an Afghan intelligence agency compound in the city, which was also claimed by ISIL.

And on December 18, militants from the group stormed an intelligence training compound in Kabul, triggering an intense gunfight with police, two of whom were wounded.

Security in Kabul has been ramped up since May 31 when a massive truck bomb ripped through the diplomatic quarter, killing some 150 people and wounding around 400 others – mostly civilians. No group has yet claimed that attack.

Despite the increased security measures, militants continue to plan and carry out devastating attacks.

On Wednesday, Afghanistan's spy agency announced it had busted a 13-member ISIL cell in Kabul that had been hatching "a series of big terrorist attacks" in the city.