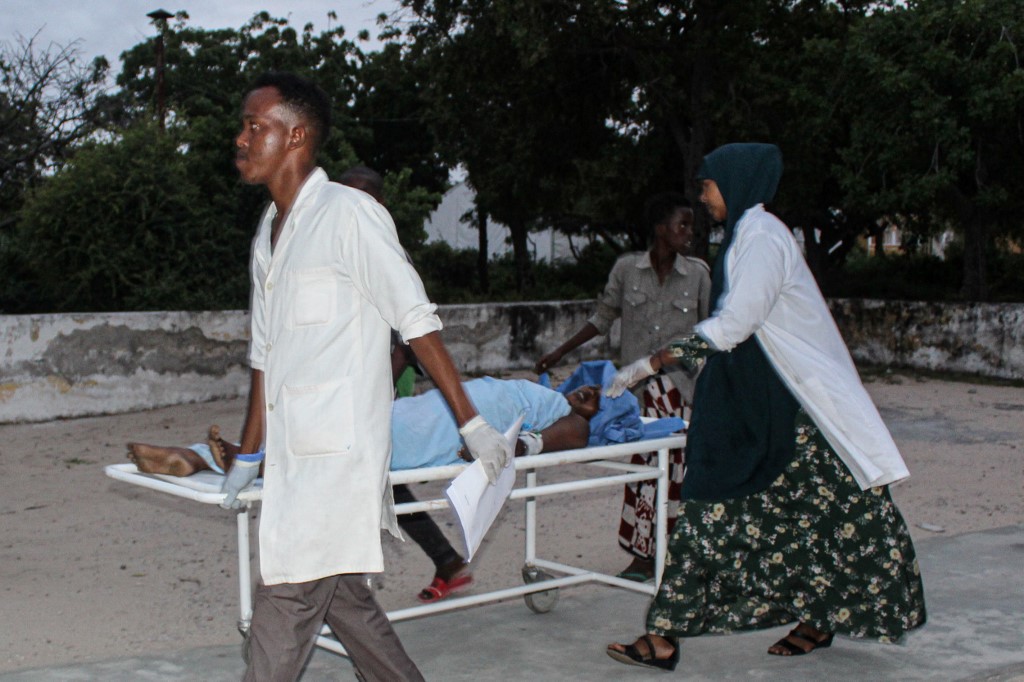 Medical staff carry a wounded woman on a stretcher foll at Madina hospital in Mogadishu on August 16, 2020, following a gun and bomb attack by Al-Shabaab fighters on an upscale beachfront hotel in Somalia's capital. At least five people were killed in the attack, officials and witnesses said. （Photo: AFP)

Ten civilians and one police officer were killed in a gun and bomb attack by Al-Shabaab fighters on an upscale beachfront hotel in Somalia's capital on Sunday, an official told AFP.

It was not clear how Somali security forces managed to end the siege on the hotel and kill the assailants, who at one point were said to have taken hostages.

Earlier on Sunday, while the siege was still ongoing, a security source told AFP on condition of anonymity that one of the assailants had died in the car bomb explosion that kicked off the attack and two others had died in a shootout.

Ambulance workers at the scene reported that at least 28 people were wounded.

Witnesses said the attack began with a heavy explosion and people ran from the area as gunfire could be heard from the hotel, which is frequented by government officials.

"The blast was very heavy and I could see smoke in the area. There is chaos and people are fleeing from nearby buildings," said witness Ali Sayid Adan.

Al-Shabaab said they carried out the attack, according to a statement translated by the SITE Intelligence Group.

The statement claimed its fighters "took control over the hotel" in the "martyrdom-seeking operation".

Somalia plunged into chaos after the 1991 overthrow of then-President Siad Barre's military regime, leading to years of clan warfare followed by the rise of Al-Shabaab which once controlled large parts of the country and Mogadishu.

Al-Shabaab was driven out of the capital in 2011, but its militants continue to wage war against the government, carrying out regular attacks.

Last week four Shabaab fighters held in Mogadishu's central prison were killed in an intense shootout with security forces after they somehow managed to get their hands on weapons within the facility.

The group has targeted hotels multiple times over the years, including in February 2019 when it killed at least 20 people in a car bomb and gun attack on a hotel in Mogadishu that lasted for nearly 24 hours.

A month before that, Al-Shabaab killed 21 people in a siege on an upscale hotel in the Kenyan capital Nairobi, an assault that highlighted its ability to expand its network beyond Somalia's borders.

Its last major attack in Mogadishu was in December 2019, when it slaughtered 81 people by detonating a vehicle packed with explosives.

It is difficult to say whether the relative lull this year reflected improved capacity on the part of Somali security forces or a change in strategy by Al-Shabaab, said Omar Mahmood, Somalia senior analyst for International Crisis Group.

For the past year Somali forces have been engaged in an offensive in the nearby Lower Shabelle region designed to stymie efforts by Al-Shabaab to move weapons into the capital, Mahmood noted.

But there has been "an uptick in activity" in Mogadishu since late June including suicide attacks targeting government and military facilities, he said.

The claim of responsibility distributed Sunday stressed that the Elite Hotel "is inhabited by a large number of government officials".

"This is kind of getting back to the attacks they used to do," Mahmood said.

"Al-Shabaab sees these hotels as an extension of the government more or less, so they are targeted in that way."