WORLD 12 killed, 13 injured as bus falls into gorge in India

12 killed, 13 injured as bus falls into gorge in India

NEW DELHI, Nov. 18 (Xinhua) -- At least 12 people were killed and 13 others injured on Sunday after a passenger bus skidded off the road and falls into a gorge in northern Indian state of Uttarakhand, police said. 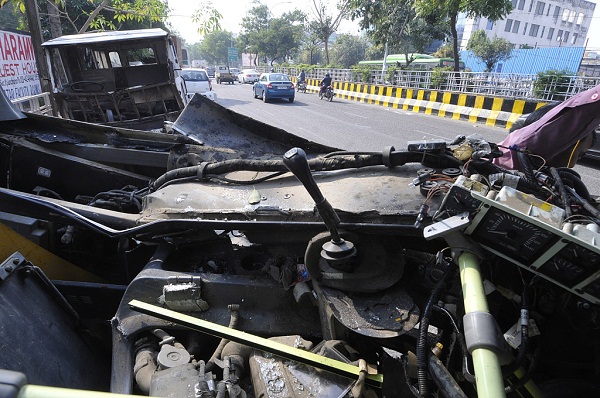 A view of the mangled remains of a school bus that met with an accident on Saturday morning, parked at the police station in Sector 20, on November 17, 2018 in Noida, India. (Photos: VCG)

The accident took place near Damta in Uttarkashi district, about 100 km north of the capital city of Uttar Pradesh.

"In a tragic road accident here today 12 people were killed and 13 others injured after a bus skidded off road and fell into a 150-feet gorge," a local government official said. "The injured were immediately removed to nearest medical facility and the critically injured were airlifted to Dehradun."

Following the accident locals and police teams rushed to the spot to carry out rescue work.

Senior police officials rushed to the spot to oversee the rescue work.

"We are on the spot retrieving bodies from the gorge. Some have been retrieved and search for others is underway," the official said.

Police have registered a case and ordered investigations into the accident

The cause of the accident was not immediately known.

Police said the private bus was ferrying local passengers on an inter-district route.

Uttarakhand Chief Minister Trivendra Singh Rawat expressed grief over the loss of lives in the accident and directed the district administration to provide assistance to the injured.

Deadly road accidents are common in India often caused due to overloading, bad condition of roads and reckless driving.

Officials say on an average over 400 deaths take place every day in India due to road accidents.