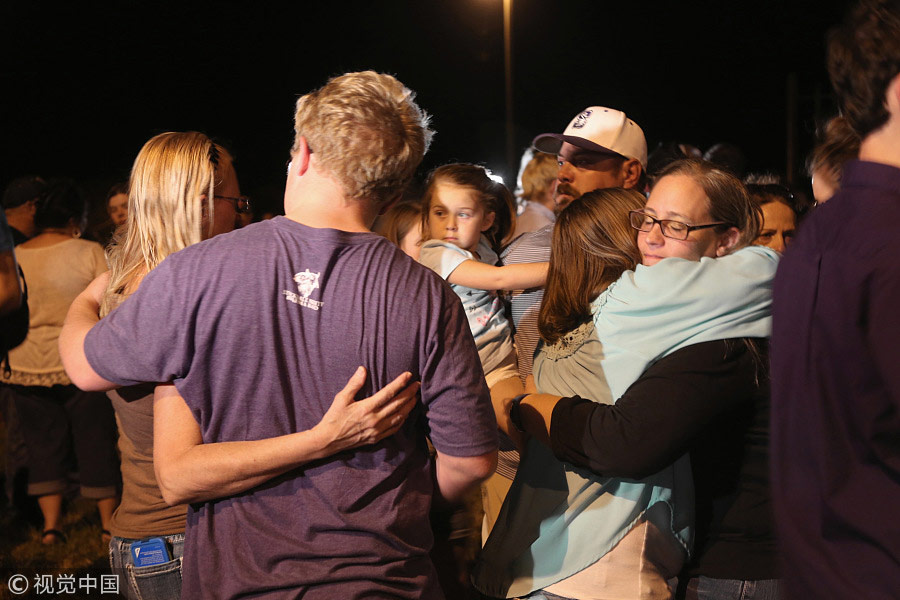 Residents of Sutherland Springs hug each other during a vigil held to mourn the victims on Nov 5, 2017. Photo: VCG

The Wilson County Sheriff Joe Tackett said on Monday (Nov. 6) morning that of the 26 dead, 12 to 14 were children, ABC reports.Among the dead is Annabelle Pomeroy, the 14-year-old daughter of the First Baptist Church's pastor. The pastor and his wife were traveling out of state when the shooting occurred.Sherri Newman Pomeroy told CNN, "We lost more than Belle yesterday, and the one thing that gives me a sliver of encouragement is the fact that Belle was surrounded, by her church family that she loved fiercely, and vice versa. Our church was not comprised of members or parishioners, we were a very close family"."We ate together, we laughed together, we cried together, and worshipped together... As senseless as this tragedy was, our sweet Belle would not have been able to deal with loosing so much family," Wilson County Sheriff Joe Tackitt told media that the gunman was shot wound by local citizen before returning to his car.Sutherland Springs  is a small town with only 362 residents, according to the census in 2000. In the community, "everybody knows everybody". The large casualty by the mass shooting on Sunday was a disaster for the town.