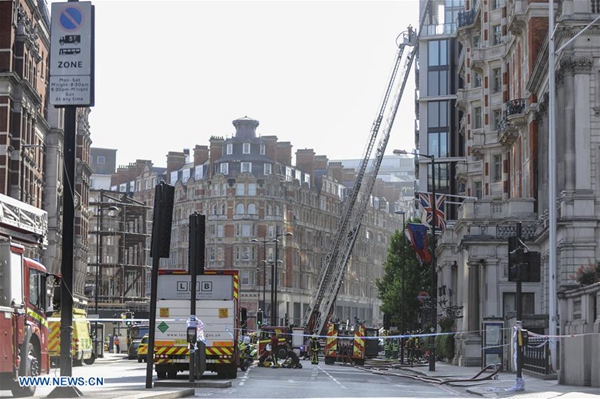 Firefighters and emergency services staff work at the scene after a fire broke out at Mandarin Oriental Hotel in London's Knightsbridge, Britain, on June 6, 2018. (Photo/Xinhua)

A total of 20 fire engines and 120 firefighters and officers are battling a massive blaze at the Mandarin Oriental Hotel in London's Knightsbridge, London Fire Brigade said Wednesday.

Huge plumes of smoke coming out of the five-star hotel were visible across central London. "Ash is falling everywhere," an eyewitness said.

The 12-floor hotel has been evacuated.

"Firefighters are working extremely hard to bring the fire under control. Crews wearing breathing apparatus are carrying out a search inside the building," London Fire Brigade Station Manager Pam Oparaocha said at the scene.

"Firefighters are likely to be there throughout the evening and once the fire has been brought under control fire investigators will take over to establish how the blaze started," she added.

The cause of the fire is not known yet. It is not immediately known whether there are any casualties. Police near the site told media that they didn't know if there were people trapped inside.

Part of the road near Knightsbridge had been closed, according to London traffic authorities.

Knightsbridge is an exclusive residential and retail district in West London.

London Ambulance Service has sent multiple crews including incident response officers and hazardous area response team to the site. "We have not treated any patients, but we remain on scene as a precaution," said Graham Norton, its assistant director of operations.

The fire came as the city commemorated the one year anniversary of the Grenfell Tower fire which claimed 72 lives.

According to the Mandarin Oriental's official website, the London hotel had recently completed a multi-million pound renovation. It has altogether 181 guestrooms and suites.