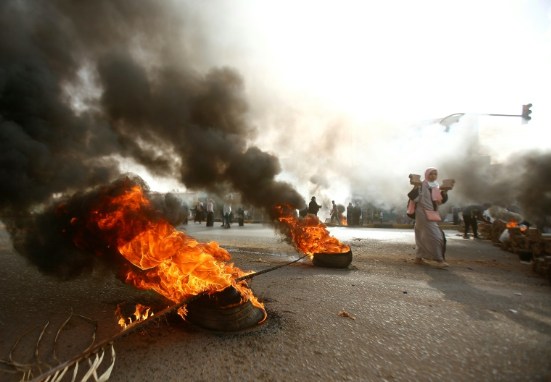 Sudanese protesters have been camped out for weeks outside the army headquarters, calling on the military rulers to cede power to a transitional authority. (Photo: AFP)

Heavily armed members of the paramilitary Rapid Support Forces were deployed in large numbers along the capital's main roads.

Manning pick-up trucks mounted with machine guns, they guarded the entrances to the bridges that cross the Nile and moved in convoys around the city ahead of evening prayers.

The United States and Britain called for an end to the crackdown on protesters, who want the generals behind the overthrow of veteran president Omar al-Bashir to hand over to civilian rule.

"According to initial estimates, we lost 13 martyrs to the bullets" of the military council, the Alliance of Freedom and Change umbrella protest group said, adding that "hundreds" were wounded.

An eight-year-old child was among those killed, according to the Central Committee of Sudanese Doctors, which is close to the demonstrators.

It reported a "large number of critical casualties" and called for "urgent support" from the International Committee of the Red Cross and other humanitarian organisations to help the wounded.

Beyond the heavy presence of security forces, the streets of the capital were largely empty Monday afternoon, with sporadic cars circulating and a few people walking, because public transport had shut down, an AFP correspondent said. 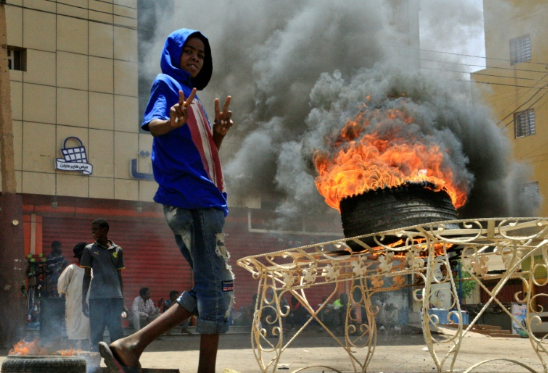 Many streets remained blocked off by demonstrators who had erected barricades made from stones, tree trunks and burning tyres, although the protesters had departed.

Many shops, pharmacies and businesses were shuttered around the city.

The military council denied its forces violently dispersed the sit-in in front of army headquarters, as demonstrators took to the streets in towns elsewhere in the country.

But protest leaders said the main protest site in Khartoum had been cleared.

"The Rapid Support Forces and the army and police and militia battalions dispersed the peaceful sit-in," the Alliance for Freedom and Change said in a statement.

Outside the army headquarters "there is no one, but the pure bodies of our martyrs that it has not been possible to evacuate from the site".

It called on Sudanese to take part in "total civil disobedience" to topple the military council. 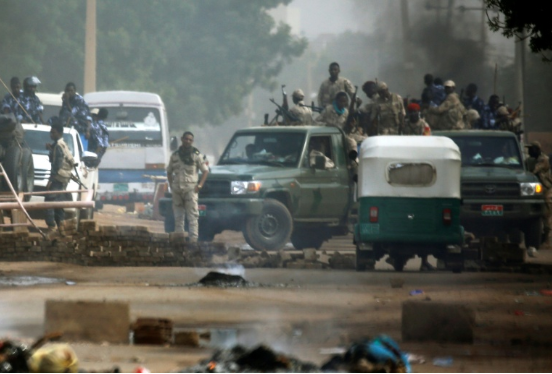 Gunfire was heard from the protest site by an AFP journalist, who reported a heavy deployment of security forces around the streets of the capital. (Photo: AFP)

The doctors' committee said forces had opened fire inside the city's East Nile Hospital and had chased "peaceful protesters".

It said another hospital near the site of the sit-in had been surrounded and that volunteers were prevented from reaching it.

Rallies against Bashir's authoritarian, three-decade rule led to his ouster in April, but protesters had remained outside the army headquarters calling on the generals to cede power to a transitional authority.

Near the demonstration site, a witness living in the Burri neighbourhood said he could "hear the sound of gunfire and I see a plume of smoke rising from the area of the sit-in."

Another resident of the area, in east Khartoum, said he had seen forces in "police uniform" trying to expel the demonstrators.

The military council "did not disperse the sit-in by force," its spokesman said.

"The tents are there, and the youth are moving freely," Shamseddine Kabbashi told Sky News Arabia.

Britain's ambassador to Khartoum, Irfan Siddiq, said he had heard "heavy gunfire" from his residence. 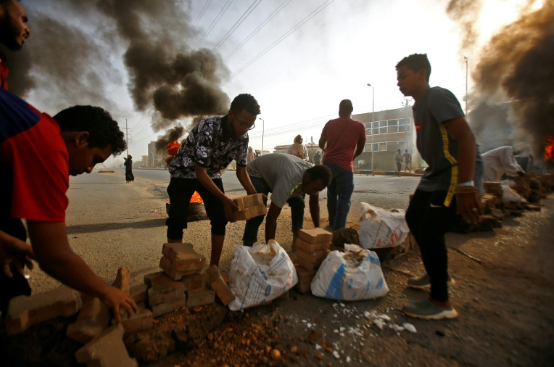 Protesters build a brick barricade on Street 60, one of the main streets in the capital. (Photo: AFP)

That country's foreign minister condemned "the attack on protesters by Sudanese security forces" and called it "an outrageous step".

"The Military Council bears full responsibility for this action and the international community will hold it to account," Foreign Secretary Jeremy Hunt wrote on Twitter.

The US embassy in Khartoum said "security forces' attacks against protesters and other civilians is wrong and must stop."

"Responsibility falls on the TMC. The TMC cannot responsibly lead the people of Sudan," it added referring to the transitional military council.

Moussa Faki, the head of the African Union Commission, urged "an immediate and transparent investigation in order to hold all those responsible accountable".

He also called "on the Transitional Military Council to protect the civilians from further harm," a statement said.

The Alliance for Freedom and Change announced "the end of all political contact and negotiations with the putschist Council" following the deaths, even as neighbouring Egypt appealed for the two sides to talk.

Negotiations between protest leaders and the ruling military council have broken down, as the two sides have failed to agree on whether a planned transitional body would be headed by a civilian or a military figure.