DAMASCUS, Oct. 20 (Xinhua) -- At least 13 people were killed and three others wounded in a bomb attack on an army bus in central Damascus on Wednesday, state news agency SANA reported. 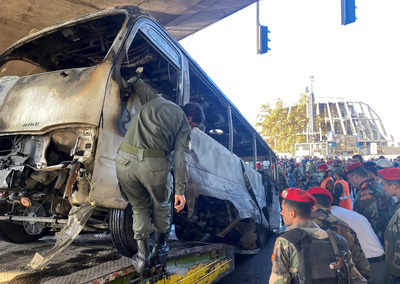 People heard the sound of a powerful explosion early Wednesday, which appeared later to be roadside bombs targeting a military passenger bus passing near the President Bridge in the heart of the Syrian capital.

Following the explosion, a bomb squad found a third explosive device and dismantled it, it added.

Meanwhile, the state news agency posted photos of a charred passenger bus with military personnel around it checking the situation.

The President Bridge is a very busy area in Damascus where the main transportation station, which connects the capital through dozens of buses, mini buses and mini vans, is located.