NAIROBI, Dec. 3 (Xinhua) -- The Kenyan government on Tuesday confirmed that 132 people have lost their lives from rain-triggered disasters since October.

Locals looked at the aftermath of a massive landslide that struck villages after torrential rains in West Pokot, Kenya, Nov. 24, 2019. (Photos: Xinhua)

Cyrus Oguna, government spokesperson with Ministry of Information, Communication and Technology told journalists in Nairobi that the floods and landslides have affected 32 counties across the country, resulting in approximately 17,000 people being displaced.

"For the third month running, the country continues to experience unprecedented heavy rains which have triggered floods, mudslides and other calamities associated with bad weather," Oguna said.

He noted that the humanitarian situation remains dire as an undetermined number of people have been marooned and are still cut off by the floods.

He observed that over 11,000 livestock have been swept away, with an undetermined acreage of farmlands left submerged.

He revealed that the government is currently implementing a number of interventions in collaboration with other actors such as the Red Cross, World Food Programme and other humanitarian agencies to assist the affected communities with food and non-food items. 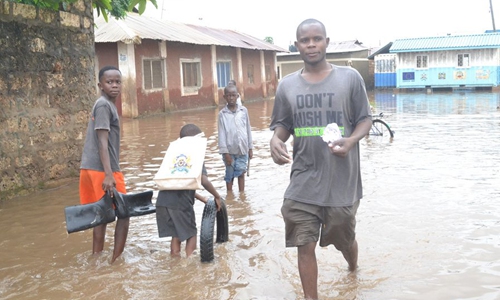 People waded through a flooded street in Mombasa, Kenya, Nov. 12, 2019. Heavy rains at the Coast have disrupted transport in major towns as some roads were rendered impassable due to flooding.

In addition, Oguna said that a multi-agency team is assessing the extent of the damage on infrastructure and is currently undertaking repairs.

Oguna noted that the weather forecast has indicated that the current rains are not expected to cease until the end of December 2019 and so the government will continue monitoring the situation and undertaking appropriate intervention mechanisms.

"We are issuing an advisory that those living in the high-risk areas such as Lake Victoria Basin, Lower Tana Delta, Coastal and Central regions to move to safer areas," said the government spokesman.

Additionally, he advised members of the public to avoid crossing flooded waters and avoid sheltering under trees and standing close to grilled windows to minimize safety risks from lightning strikes.