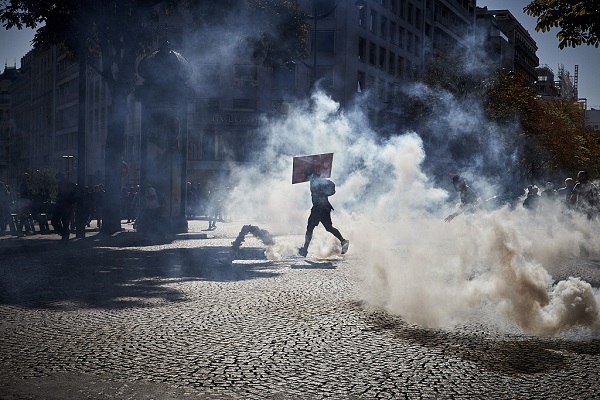 Gilets Jaunes, or yellow vest, protestors run through clouds of tear gas on the Champs Elysees during act 45 of protests in what has been billed by the movement as a ‘historic’ day of protests on September 21, 2019 in Paris, France. (Photo: VCG)

They were suspected of committing violent acts in the fringe of the fresh rally. Police found in their bags materials that could be used as projectiles, including stones, slings and hammers, the report added.

French authorities have banned rallies in the landmarked Champs Elysees Avenue and the Arc de Triomphe monument, which often became flashpoint of clashes between the police and protestors in recent protests.

Some 30 metro stations were closed and many of shops were barricaded.

In Paris, 7,500 police officers have been poured in and armored vehicles were deployed to handle more threats of rioting that, according to the government, risks to taint the social movement's 45th weekend of action, which coincided with a march for the climate and union-led demonstration against the pension reform.

Violence flared up after 1,000 anarchists, known as Black Blocs, infiltrated a march for climate.

TV footages showed hooded men wearing in black are smashing a bank's window in the capital's fifth district. A motorcycle and bins were torched, forcing firefighters to intervene.

"Yellow Vest" movement, which got its name from the high-visibility vests drivers required to have in their cars, was created on social media November last year to protest against a rise in carbon tax, which Macron said was necessary to combat climate change.

It has since turned into a bigger uprising denouncing the president's fiscal and economic policy which protestors say favors the rich. Some of them asked Macron to step down.

As the social action has posed a serious challenge to his leadership, the head of state had offered a series of concessions that began with a drop of a planned high fuel tax, which inspired the nationwide uprising. Among other sweeteners, he proposed "an economic and social emergency plan," worth 10 billion euros (11.02 billion U.S. dollars) to boost purchasing power.