WORLD 14 Fort Hood soldiers fired, suspended over violence at base

14 Fort Hood soldiers fired, suspended over violence at base

WASHINGTON (AP) — The Army on Tuesday said it has fired or suspended 14 officers and enlisted soldiers at Fort Hood, Texas, and ordered policy changes to address chronic failures of leadership that contributed to a widespread pattern of violence, including murder, sexual assault and harassment.

In a sweeping condemnation of Fort Hood's command hierarchy, Army Secretary Ryan McCarthy fired three top commanders and suspended two others pending a further investigation. He also ordered a separate probe into staffing and procedures at the base's Criminal Investigation Command unit, which is responsible for investigating crimes on Fort Hood.

The actions come after a year that saw at least 25 soldiers assigned to Fort Hood die due to suicide, homicide or accidents, including the bludgeoning death of Spc. Vanessa Guillen. Guillen was missing for about two months before her remains were found.

Speaking to reporters at the Pentagon, McCarthy said based on an independent panel's review, he concluded that the issues at Fort Hood, including major flaws in the response to sexual assault and harassment, “are directly related to leadership failures.” He said he was gravely disappointed in the commanders there, adding, “without leadership, systems don’t matter.”

Gen. James McConville, the chief of staff of the Army, told reporters that he spoke to Guillen’s mother on Tuesday morning and told her, “We are holding leaders accountable, and we will fix this.”

Gloria Guillen, Vanessa's mother, said during an emotional press conference in Houston that she spoke with McCarthy and told him the administrative actions were a step in the right direction, but she wanted to see those who had failed her daughter serve jail time.

“Nothing is going to take away the pain I feel as her mother all day and all night,” Guillen said in Spanish through tears. 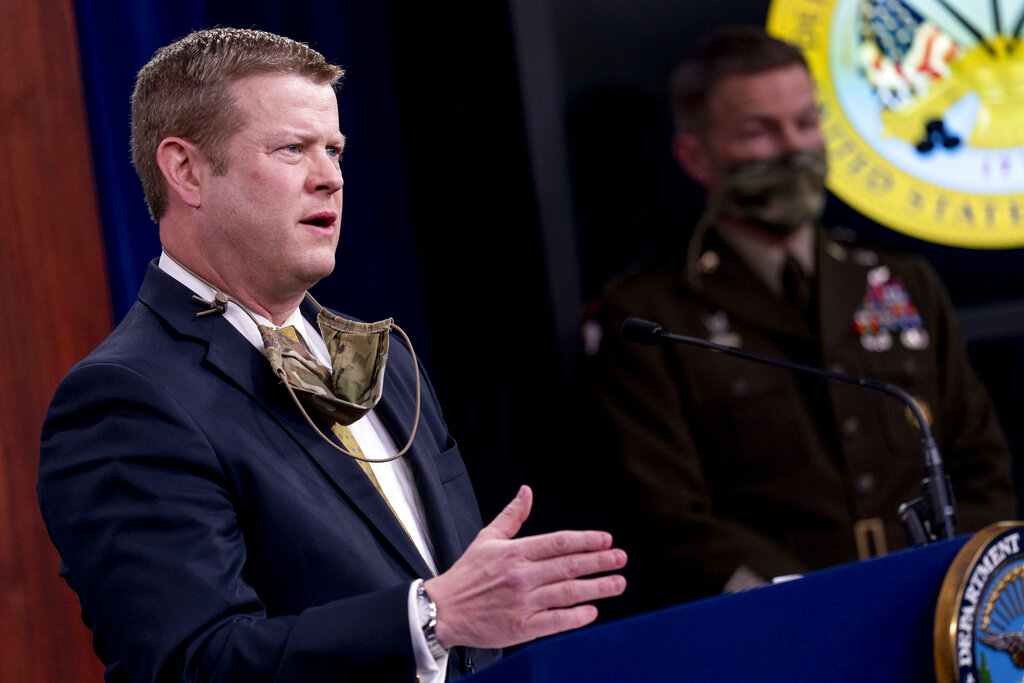 Secretary of the Army Ryan McCarthy, left, accompanied by Gen. James McConville, Chief of Staff of the Army, right, speaks during a briefing on an investigation into Fort Hood, Texas at the Pentagon, Tuesday, Dec. 8, 2020, in Washington. (Photo: AP)

Natalie Khawam, the Guillens' attorney, said Criminal Investigation Command (known as CID) officers were among those fired or suspended Tuesday. The panel found that Fort Hood was used as a training ground for new CID officers, and there was a lot of turnover and many of the officers were inexperienced and overassigned.

McCarthy also ordered a new Army policy that changes how commanders deal with missing soldiers. The panel found there were no detailed procedures for what commanders of small units should do if a soldier is missing, but not necessarily AWOL, or absent without leave. The new policy requires leaders to list service members as absent-unknown for up to 48 hours and to do everything they can to locate the soldier to determine if the absence is voluntary before declaring anyone AWOL.

The firings include Army Maj. Gen. Scott Efflandt, who was left in charge of the base earlier this year when Guillen was killed, as well as Col. Ralph Overland, the 3rd Cavalry Regiment commander and his Command Sgt. Maj. Bradley Knapp. Among those suspended were Maj. Gen. Jeffery Broadwater, the 1st Cavalry Division commander, and his Command Sgt. Maj. Thomas C. Kenny. The administrative actions are expected to trigger investigations that could lead to a wide range of punishments. Those punishments could go from a simple letter of reprimand to a military discharge.

The Army did not provide the names of the other lower-ranking soldiers who face possible discipline.

The base commander, Army Lt. Gen. Pat White, will not face any administrative action. Asked about that, McConville said White was deployed to Iraq as the commander there for much of the year so wasn't at the base. “Leadership is about presence,” said McConville.

Army leaders had already delayed Efflandt’s planned transfer to Fort Bliss, where he was slated to take over leadership of the 1st Armored Division. Efflandt’s move was paused while the team of independent investigators conducted its probe into whether leadership failures contributed to the killings of several people, including Guillen, and who should be held accountable.

Army leaders and members of the independent panel acknowledged that the death of Guillen, 20, earlier this year was a catalyst for a deeper look into what have been longstanding crime and other problems at the base.

According to investigators, Guillen was bludgeoned to death at Fort Hood by Spc. Aaron Robinson, who killed himself on July 1 as police were trying to take him into custody. Her family has said Robinson sexually harassed her, though the Army has said there is no evidence supporting that claim.

Also in July, the body of Pvt. Mejhor Morta was found near a reservoir by Fort Hood. And in June, officials discovered the remains of another missing soldier, Gregory Morales, about 10 miles from that lake.

The five-member panel spent three weeks at Fort Hood and conducted more than 2,500 interviews, including 647 in person. More than 500 of those were with female soldiers. They also collected more than 31,000 responses to a sexual assault and harassment survey. They said they found a deep dissatisfaction with the sexual assault and harassment reporting and response program.

They said female soldiers told them they were afraid of retaliation for complaints, including fears they would be moved to other jobs, their confidentiality would be compromised and their careers would be derailed. They also complained about long delays in investigations, and many said they didn't report incidents of sexual assault or harassment due to lack of confidence in the program.

Panel member Carrie Ricci, a retired member of the Army's Judge Advocate General’s Corp who served for three years at Fort Hood, had a message to the female soldiers there. “I want them to know we believe you,” she said.

Chris Swecker, the committee chairman and retired head of the FBI's criminal investigation division, said the panel concluded there was a significant lack of emphasis on the sexual assault response program, and that, more broadly, Fort Hood has a serious crime problem that largely goes unaddressed. He said commanders are guilty more of “acts of omission” rather than acts of commission.

Swecker said there was little visible deterrent or plan to prevent crimes that range from assaults to drug use. Fort Hood, he said, has the highest rate of positive drug tests in the Army.

At Fort Hood, White told reporters that the panel's report gave him a “historically unprecedented” granular look at the base's problems, and “what was made abundantly clear is that we have to fix our culture.” He said he will immediately implement some of the report’s suggested actions and has already held two sexual assault review board meetings. He also said he ordered a ”compassion team" to meet with all of the soldiers who were fired or suspended.